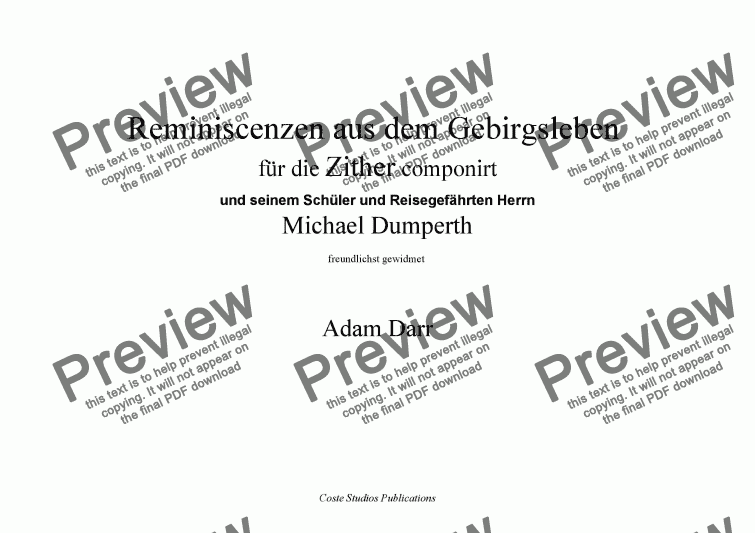 Reminiscenzen aus dem Gebirgsleben (Reminiscences from the Mountain Life) is one of Darr�s earlier known major works for the zither. Zitherists will notice that this work is a significant 183 measures and almost 6 minutes long. Anton B�hm of Augsburg published this work during the early to mid 1850s. Although it makes use of alpine shaped folk motifs and forms, it is an original composition probably written for the fashionable salons of Munich. Musicians ought to take notice of the L�ndler, a form that Darr captures quite effectively. A demand for this kind of romanticized folk music was in vogue and Darr was an important contributor to this genera. Zither players need to be aware that Darr�s zither tuning is different that of today�s modern instrument. For a historically accurate performance, string #10 must be tuned and octave higher, while strings # 17, 19, and 22 must be tuned an octave lower than today�s tuning standard. In an effort to bring some clarity and brevity to the notation, I have used some guitar designations. The fretboard strings are designated as Arabic numerals inside of a circle and orders from the highest string (a) number 1 to the lowest string © number 5. Harmonics are designated with diamond note heads at pitch, with a string number and fret number. Although this is a departure from past practices, I believe it adds clarity and a certain amount of uniformity with the other classical instrument notation.