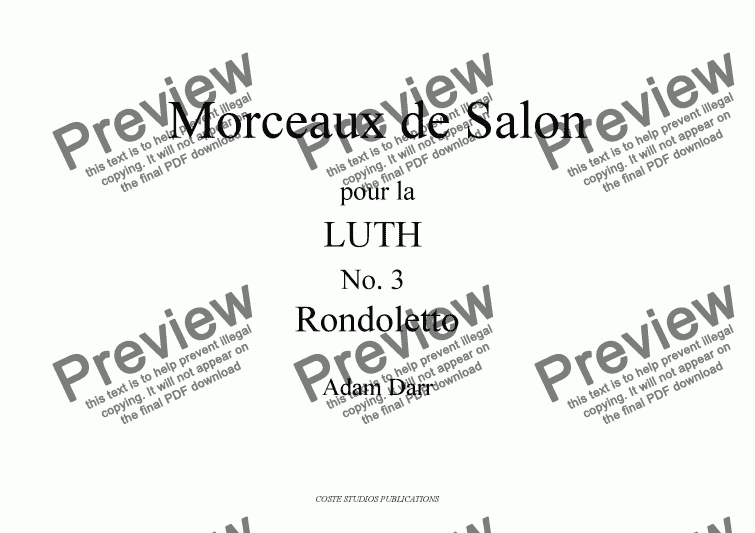 Rondoletto is the third piece in a series of 12 entitled Morceaux de Salon pour la Luth par A. Darr. The Rodoletto is one of Darr�s favorite forms, of which he wrote several for zither and guitar solo. For the mp3 I have used a Steinway piano for the treble clef and a harp for the bass clef. If anyone is aware of zither samples, please let me know. Zither players need to be aware that Darr�s zither tuning is different that of today�s modern instrument. For a historically accurate performance, string #10 must be tuned and octave higher, while strings # 17, 19, and 22 must be tuned an octave lower than today�s tuning standard. In an effort to bring some clarity and brevity to the notation, I have used some guitar designations. The fretboard strings are designated as Arabic numerals inside of a circle and orders from the highest string (a) number 1 to the lowest string © number 5. Harmonics are designated with diamond note heads at pitch, with a string number and fret number. Although this is a departure from past practices, I believe it adds clarity and a certain amount of uniformity with other classical instrument notation. For more information on Darr see my DMA research paper "ADAM DARR (1811-1866) THE CAREER AND WORKS OF A GERMAN ROMANTIC GUITARIST AND ZITHERIST."