Sign in / Register
HomeInstrumentationsSolo instrument + pianoJazz it up: ’When the Saints Go Marching In’ for Violin & Piano

Jazz it up: ’When the Saints Go Marching In’ for Violin & Piano 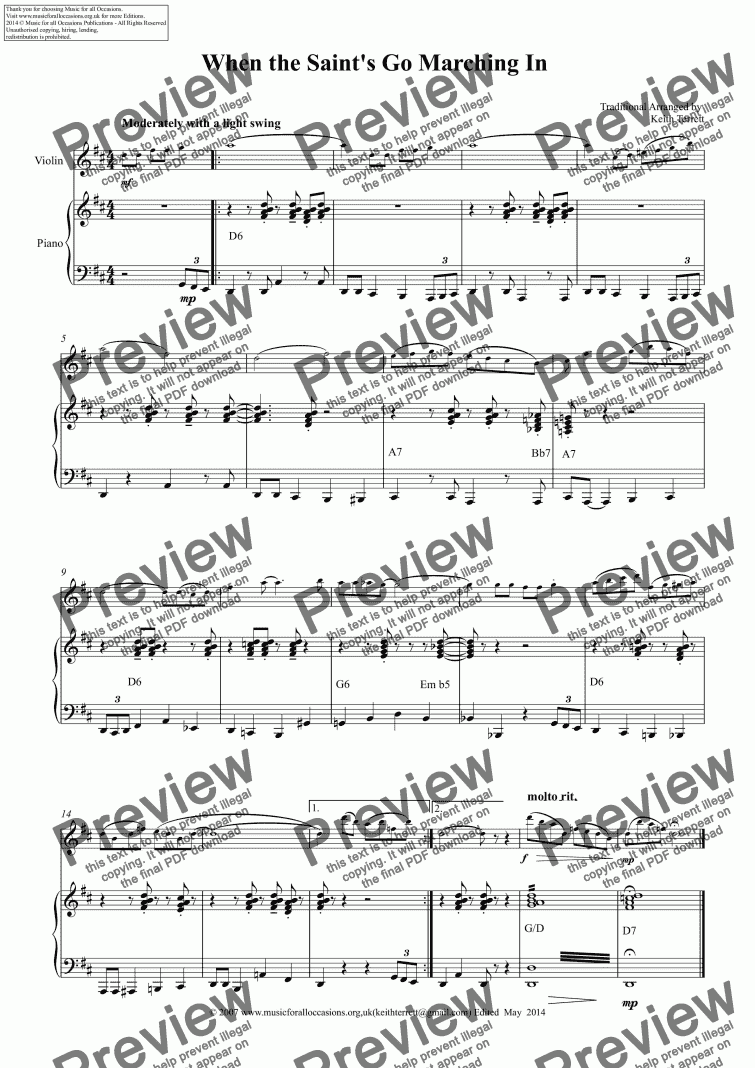 Jazz it up: ’When the Saints Go Marching In’ for Violin & Piano

Composer
trad.
Arranger
Keith Terrett
Publisher
Music for all Occasions
Difficulty
Easy (Grades 1-3)
Duration
2 minutes
Genre
Jazz music
License details
For anything not permitted by the above licence then you should contact the publisher first to obtain permission.

A New series entitled ’Jazz it up’, aimed at young players wishing to explore jazz and improvisation.

Funeral music tradition of New Orleans, Louisiana, often called the "jazz funeral," while accompanying the coffin to the cemetery, a band would play the tune as a dirge. On the way back from the interment, it would switch to the familiar upbeat "hot" or "Dixieland" style. While the tune is still heard as a slow spiritual number on rare occasions, from the mid-20th century it has been massively more common as a "hot" number. The number remains particularly associated with the city of New Orleans, to the extent that New Orleans’ professional football team was named the New Orleans Saints, after the song.

Both vocal and instrumental renditions of the song abound. Louis Armstrong was one of the first to make the tune into a nationally known pop-tune in the 1930s. Armstrong wrote that his sister told him she thought the secular performance style of the traditional church tune was inappropriate and irreligious. However, Armstrong was in a New Orleans tradition of turning church numbers into brass band and dance numbers that went back at least to Buddy Bolden’s band at the very start of the 20th century.

The tune was brought into the early rock and roll repertory by Fats Domino and (as "The Saint’s Rock and Roll") by Bill Haley & His Comets.

A true jazz standard, it has been recorded by a great many other jazz and pop artists. For lists and further details, see Performers of When the Saints Go Marching In.

It is nicknamed "The Monster" by some jazz musicians, as it seems to be the only tune some people know to request when seeing a Dixieland band, and some musicians dread being asked to play it several times a night. The musicians at Preservation Hall in New Orleans got so tired of playing it that the sign announcing the fee schedule ran $1 for standard requests, $2 for unusual requests, and $5 for "The Saints." (This was in early 1960s dollars. By 2004 the price had gone up to $10.)

This well-known tune is also the theme/rallying song for a number of sports teams. For lists and further details, see When The Saints Go Marching In in sport.

The Rhodesian Light Infantry, also known as "The Saints," used it as their regimental march.

Reviews of Jazz it up: ’When the Saints Go Marching In’ for Violin & Piano