By: Benjamin Sajo
For: Concert band / wind band
This music is in your basket
View basket
Loading... 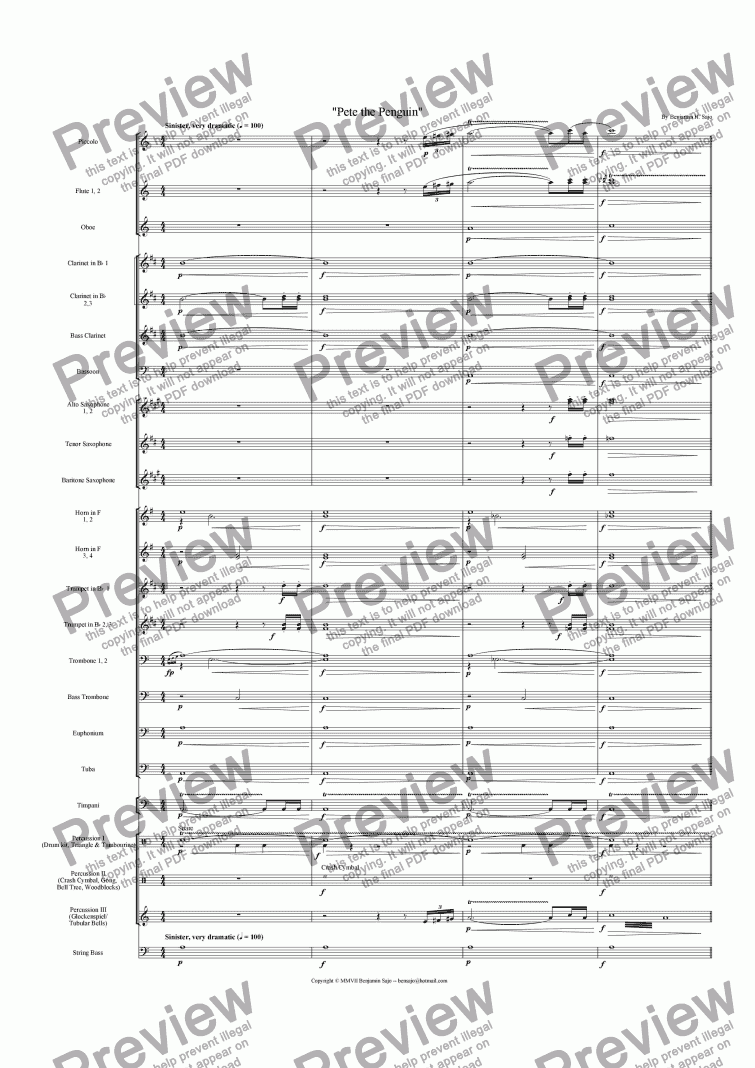 Composer
Benjamin Sajo
Year of composition
2007
Lyricist
none
Difficulty
Difficult (Grades 7+)
Duration
6 minutes
Genre
Modern classical music
License details
For anything not permitted by the above licence then you should contact the publisher first to obtain permission.

�I have often had the impression that, to penguins, man is just another penguin - different, less predictable, occasionally violent, but tolerable company when he sits still and minds his own business� – Bernard Stonehouse

Inspired by the epic bildungsroman of a young Emperor Penguin who, while playing in the ocean, finds himself tossed away from the Antarctic shore, chased by leopard seals, shipwrecked on the coast of Argentina, befriended by a sailor who sends him off to Canada by plane � while holding onto the external metal wings with very slippery wings of his own � where in turn he is purchased by a little girl in a toy store and continues to have several other adventures with the animals of his new home.

The original stories of �Peter the Penguin�, were written by my sister, Becky Sajo-Carovillano, who is a professional clarinetist with her husband in the duo Acclarion. This composition has gone through several stages over several years, originally a clarinet/piano duet, then a more mature clarinet/piano duet, and now finally a much more mature concert band composition. The chart is a light concert work that makes gratuitous use of polytonality, honking and snappy melody. Oh, and by the way, the last six bars for the low brass spell out �the end� in Morse Code.

Rosy-Fingered Dawn Over the Wine-Dark Sea, Prelude #3, B'reshit - First Verse of Genesis, Pete The Penguin, March Manitou, Love at Night, "A Husky Howl", His Was A Life Of Greatness, Blues - Dedication to New Orleans, Flee Freeride for Choir, "Wasting Time", Flea Freeride, ’Been Jammin, "I Did Not Know What To Do", Jazz Sonatina in F, Suite to "Stories Gone Wilde", The Girl Who Loved Her Horses, The Prom Song for Big Band, The Prom Song Lead Sheet!, Toledo and Why Won't Our Eyes Meet?

Reviews of Pete the Penguin