The Lone Ar-ranger - plus one!

By: Rossini
For: Solo Clarinet in Bb + piano
This music is in your basket
View basket
Loading... 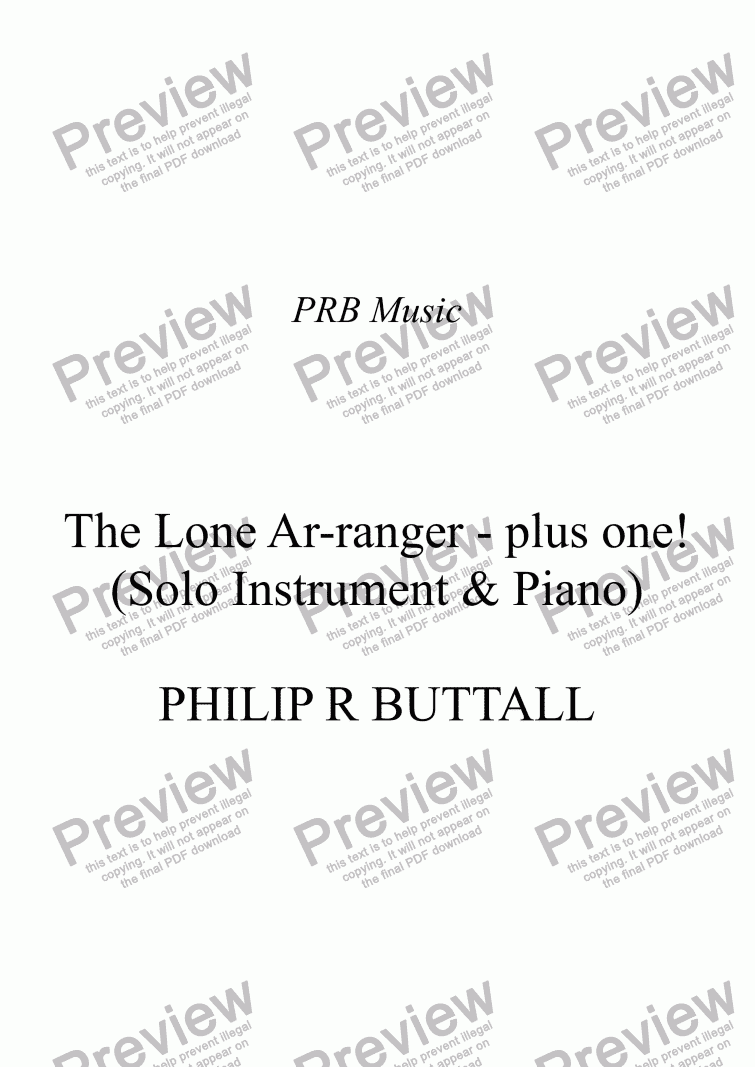 The Lone Ar-ranger - plus one!

By: Rossini
For: Solo Clarinet in Bb + piano

Composer
Rossini
Year of composition
2007
Arranger
Philip R Buttall
Publisher
PRB Music
Difficulty
Difficult (Grades 7+)
Duration
3 minutes
Genre
Classical music
License details
For anything not permitted by the above licence then you should contact the publisher first to obtain permission.

The Lone Ar-ranger! fortunately has seemed to be a popular score, in all its various versions and derivatives!

Recently I was emailed by fellow SibeliusMusic-composer, Martin Jones, who wrote: A while ago I printed off your ’Samba alla Turca’ for Two Pianos, ’cos it looked like fun. My wife Frances and I played it at an informal private party with her playing the Mozart melody on C-melody saxophone and me on the samba piano, to great effect - much appreciated!

Now I realise this is not how you arranged it, and I hope you don’t mind it having been used in this way. Now we have a public recital coming up at HADCAF, and I would like to ask your permission to add it to our repertoire for this recital and perhaps others in the future.

I was happy to provide a version of for piano and a solo wind instrument, using the clarinet as one example there. I included parts for a number of other wind instruments, which were altered at times, to accommodate the different ranges available.

Following the success of that arrangement, I have now done the same with The Lone Ar-ranger! I have transposed Rossini’s original key up a semitone, as this gives a fairly good compromise for non-transposing instruments like the bassoon, and those in Bb, like the clarinet, or tenor saxophone.
I have still allowed the score and parts to be transposed, if required.

Of course, if the piano part is transposed down a tone, this will again affect some of the fingerings, which don’t, I believe, get similarly ’transposed’, even when using the latest Sibelius 5 version! As with Samba..alla Turca!, I have added a few individual tweaks to both the piano and the solo part, so that, whilst obviously based on the same piece, there is some freshness still in the arrangement - hopefully!

Following a number of requests worldwide, I have now uploaded a special non-playing score, which lists, and identifies all the tune fragments used in The Lone Ar-ranger!

There are also separate versions for Flute & Piano, Tuba & Piano, and Violin & Piano respectively. Please click on each title to find its score on Score Exchange.

Reviews of The Lone Ar-ranger - plus one!