By: Benjamin Sajo
For: Choir
This music is in your basket
View basket
Loading... 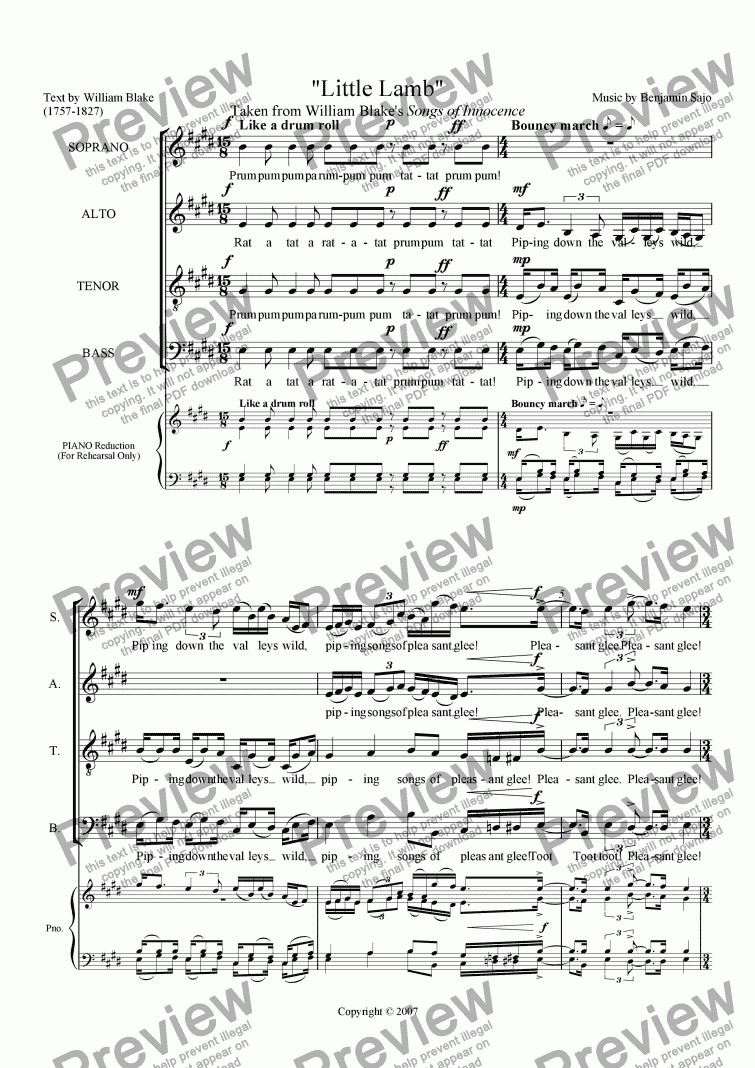 By: Benjamin Sajo
For: Choir

Composer
Benjamin Sajo
Lyricist
William Blake
Difficulty
Difficult (Grades 7+)
Duration
5 minutes
Genre
Modern classical music
License details
For anything not permitted by the above licence then you should contact the publisher first to obtain permission.

This madrigal, being free in musical form in an effort to �word-paint� each line of text, continues a long tradition of composers setting the poems of William Blake�s (1757-1827) Songs of Innocence and Songs of Experience. �The Lamb� is from the Songs of Innocence, and is meant to convey a worldview from the eyes of a child. Although the Lamb does indeed represent Christ, this arrangement was not at all intended as a religious composition or a song of worship, though it can be used as such � though Blake�s animosity of conventional religion should be noted. Simply the evocation of innocence and freedom was enough to set William Blake to music.

When called to whistle, whistle. When called to kiss, make kissing sounds. The humming, however, is a bit more ambiguous. In fact, the more variety of �humming� there is within the ensemble would be best, with some singers perhaps going �mmhmm� while others �pumpum� or �hoohoo�. When the music says, �baba�, don�t bleat, or at least don�t have everybody bleat, but sing the pitches. The tempo descriptions are what they are.

Although any standing arrangement will do, I�ve always preferred, for the singing of madrigals, having the choir divided up into several four-person groups of one person per part, instead of one big wall of sopranos, another wall of altos, and so on.

In conclusion, �Little Lamb� is intended to be a funny, contrapuntally challenging, sometimes tongue-twisting flashback anachronism of 16th century English �musick� � and a bit of Gregorian chant for good measure � and 19th century British Romanticism. The composition would last for around five minutes or so.

Lutsel K’e Variations, White Fang: Part 1 - The Trail of the Meat, Slidell - Dedication to Louisiana for String Quartet and First Kiss and Afterwards