By: Peter Dewar-Finch
For: String orchestra
This music is in your basket
View basket
Loading... 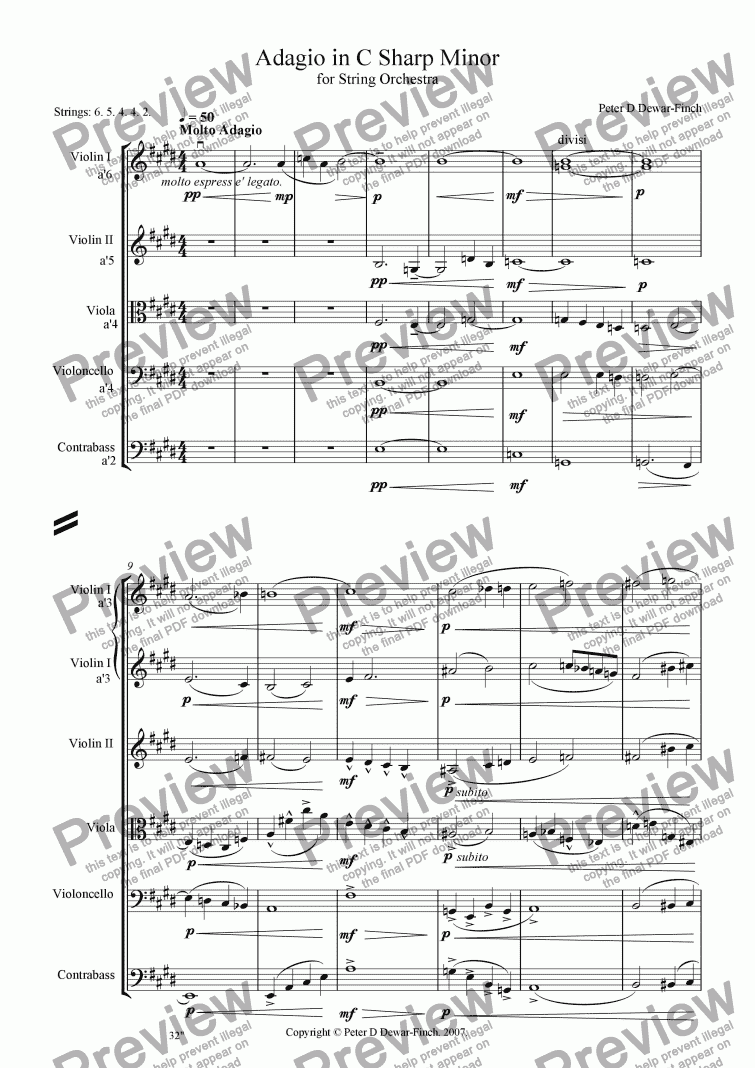 By: Peter Dewar-Finch
For: String orchestra

Composer
Peter Dewar-Finch
Difficulty
Difficult (Grades 7+)
Duration
8 minutes
Genre
Classical music
License details
For anything not permitted by the above licence then you should contact the publisher first to obtain permission.

This Adagio represents my entry to the 2007 Fauxharmonic Orchestra Adagio for Strings Competition. The competition was to find a successor to Barbers famous Adagio for strings, though in practice one can only hope to match that masterpiece, and what has been done cannot really be repeated, so it was in that vain that I entered the competition. Like Barbers Adagio for Strings, my own Adagio originated as part of a string quartet. To appreciate the genesis of this, please read the notes on my String Quartet number 2 on my Sibelius homepage.

The main theme of my Adagio in C# Minor was originally inspired by the sudden death of a friend from Leukaemia I felt the need to purge myself of the grief by writing an ultimate abstract expression of sadness, - in musical form. This now forms the second part of this adagio. The first part of the piece is part of the same tableaux, though it was inspired by the poem Evensong - St. Stephens Elegy by the poet C. J. Gallagher, and set in St. Stephens Churchyard, Acomb, York, UK, where my friend who died from Leukaemia is buried. This depicts a slow walk through the graveyard, until it pauses to linger at the point of change of theme, then the main theme takes over with the cellos dominating, later to be picked up by violas, then violins reaching a loud climax before tailing off and fading away, underpinned by sobbing cellos and contrabass.

As to playability; my wife plays viola and violin, I use my own violin when composing and I have tried out all violin sections and sought good advice from string player friends on writing for other stringed instruments. I have tried to make each sections contribution to the orchestra interesting for the players and for the conductor. My wife has often complained that the viola and double bass are often the Cinderellas of the orchestra and I have tried to rectify that. I have tried to keep articulation directions to a minimum preferring this interpretation to be done by the conductor and players on the day of the performance.

As is usual with adagios, wringing every drop of impassioned sorrow out of the piece is vital and I am satisfied that this adagio expresses those points.

Reviews of Adagio in C# minor for String Orchestra