By: trad.
For: Solo instrument (Clarinet in Bb)
This music is in your basket
View basket
Loading... 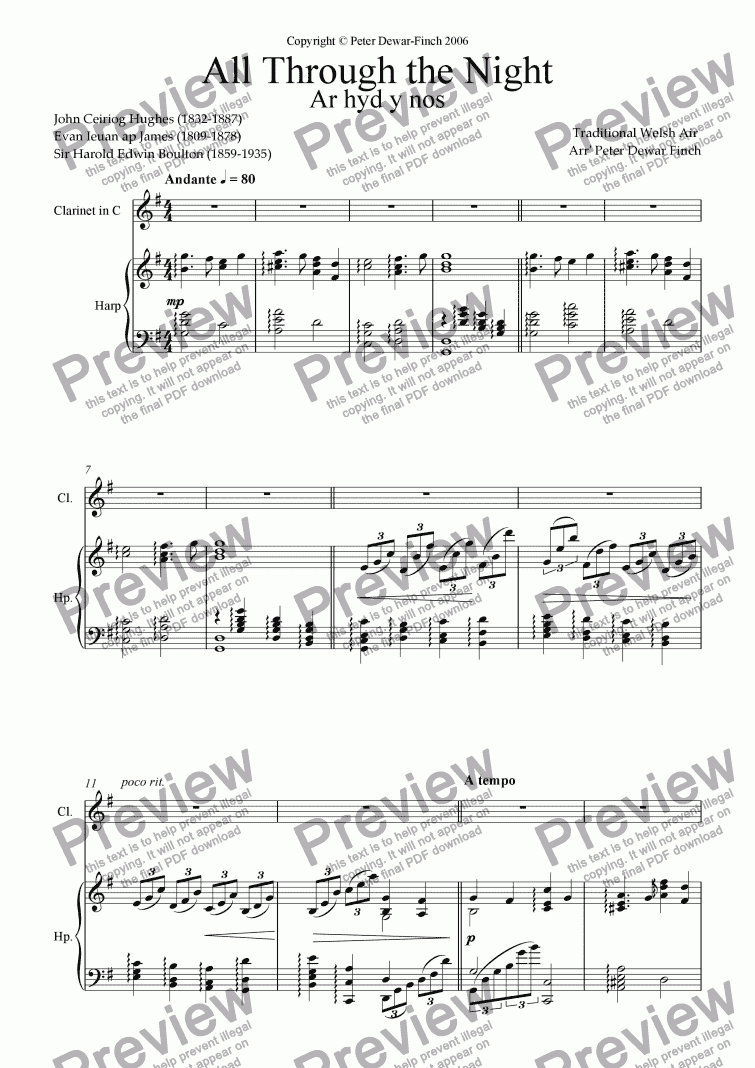 By: trad.
For: Solo instrument (Clarinet in Bb)

This Welsh folksong is sung to a tune which was collected by Edward Jones and his brother William Jones and first published in Edward Jones' Musical and Poetical Relics of the Welsh Bards in 1784, though the melody is undoubtedly a lot older. It is suggested that the first English lyrics were possibly written by the Romantic poet Amelia Opie (1769-1853) and was sung to the English setting, "Here beneath a willow weepeth poor Mary Ann."

The original Welsh lyrics for Ar hyd y nos were written by John Ceiriog Hughes (1832-1887). It has since been translated into several languages across the world, including English as All Through the Night. It is particularly difficult to translate Welsh literally into English, and this accounts for the plethora of versions. In addition it is very difficult to separate the huge range of verses to this song, penned by individuals around the world.

The Welsh harpist Edward Jones (1752-1824), Bardd y Brenin (The King's Bard) was born at Henblas, Llandderfel, Merioneth and died in London in 1824. Edward Jones was appointed as the king's harpist from 1783 to 1787 and produced more than twenty musical publications, including his popular 'The musical and poetical relicks of the Welsh bards' first published in 1784. He was often regarded as a little eccentric by his family and when he travelled to his musical engagements by Hansom cab, his harp would always travel on the inside while he rode on the footplate. This was, apparently, a contributory factor in his death after he got a good soaking. Despite his popularity as a tutor to the nobility and gentry of London, he died penniless.

An excellent account of the bard's life is available from the Welsh folk dance society in a bilingual publication titled 'dawnsiau bardd y brenin' (2002). There is also a good account of Edward Jones by his great-granddaughter at: www.famouswelsh.com/cgibin/getmoreinf.cgi?pers_id=1468&music=Edward+Jones

Edward Jones collected a huge library of Welsh music and the tune which became Ar hyd y nos was collected by Edward and his brother William. www.welshfolkdance.org.uk/grwpiau/aberystwyth/aberystwyth_llangadfan_1_1.htm

Since the 19th century numerous alternative verses have been written for this universally loved melody in many different languages and is popular in Germany as In stiller Nacht. The song is highly representative of the Welsh choral tradition.

My version of the tune in this version is on the instrument it was originally intended for, the harp, but accompanied in this instance by a Clarinet which is similar in sound to the ancient Welsh wind instrument, the Pibgorn. www.pibydd.fsnet.co.uk/pibgorn.htm . In `Musical and Poetical Relicks of the Welsh Bards' (1784), Edward Jones, `Bardd y Brenin' wrote: "Its tone is a medium between the flute and the clarinet, and is remarkable for its melody… In fact, this testimony of its sound bears little similarity to reality.

As with all my arrangements, the human voice is uppermost in my mind (but MIDI voices do not reproduce well) and this tune can be sung using the lyrics I have provided at the end of the score. The Clarinet/Pibgorn part can, of course, be replaced with almost any instrument.

This song is almost unique in that the verses can be sung in any order.

Reviews of All Through the Night for Harp and Clarinet