By: Gabriel Faur�
For: Orchestra
This music is in your basket
View basket
Loading... 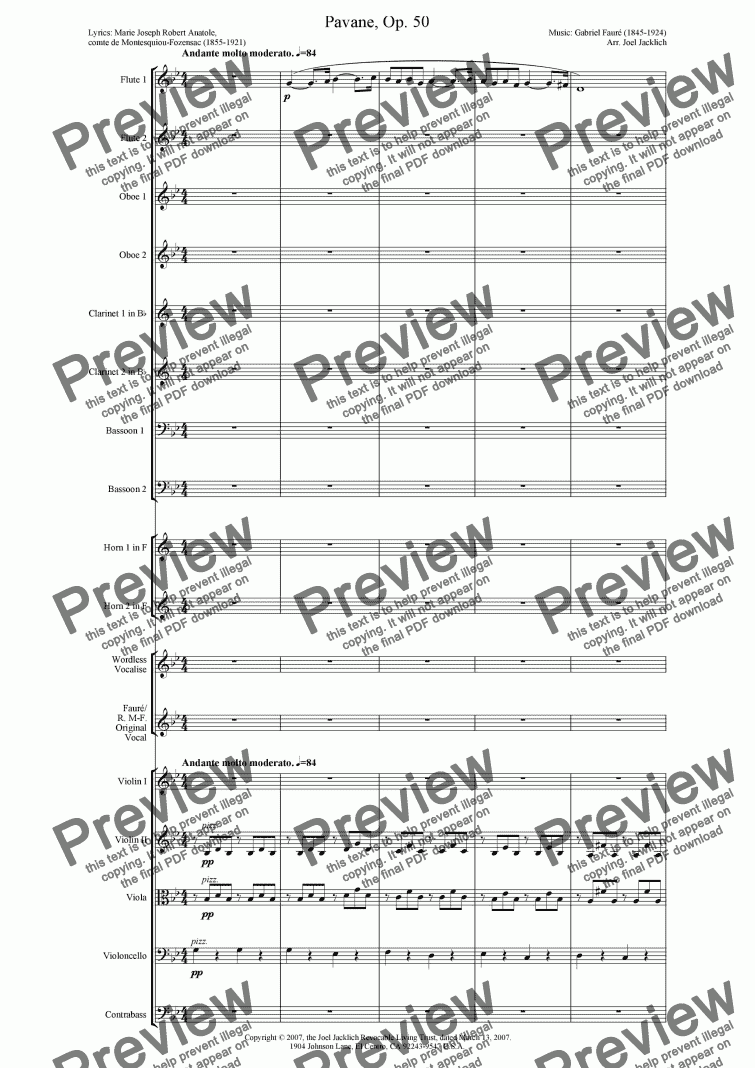 By: Gabriel Faur�
For: Orchestra

Gabriel; Faur� (1845-1924) wrote his Pavane, Op. 50, as a composition for orchestra and optional chorus in 1887. The piece is scored for strings and one pairs of flutes, oboes, clarinets, bassoons, and horns. Originally the work was written for orchestral alone, and was to be played at a series of light summer concerts conducted by Jules Danbe. Later, when Faur� dedicated the work to his patron, Countess �lisabeth Greffulhe, he added choral lyrics based on some trivial verses on the romantic helplessness of man, which had been contributed by the Countess' cousin, the symbolist poet Marie Joseph Robert Anatole, Comte de Montesquiou-Fozensac (1855-1921).

In performance, the lyics are most often omitted nowadays; however, at a request of an orchestra performing this work with soprano soloist in Springfield this coming season, I have taken the lead melodic lines from the choral parts and used Rob�t. M.-F.�s original lyrics to arrange a line for solo soprano. I have also altered the key to G minor at the request of the soprano. Robert, Comte de Montesquioui-Fozensac�s inconsequential French lyrics (and their English translation) are listed below:

It�s Lindor! It�s Tercis! And all our conquerors! It�s Myrtil! It�s Lyd�! The queens of our hearts! How provocative they are, how forever proud! How they dare to reign over our destinies and our lives! Watch out! Keep to the measure! O the mortal injury! The cadence is not so slow! And the fall more certain! We�ll tone down their chatter! Soon we�ll be their lackeys! How ugly they are! Sweet faces! How madcap they are! Coquettish airs! And always it is the same! And so will always be! They adore one another! They hate one another! They curse their loves! Farewell, Myrtil! Egl�!, Chlo�!! Mocking demons! Farewell and good day to the tyrants of our hearts!

I have also included an alternate vocal line for wordless vocalise (a la Streisand).