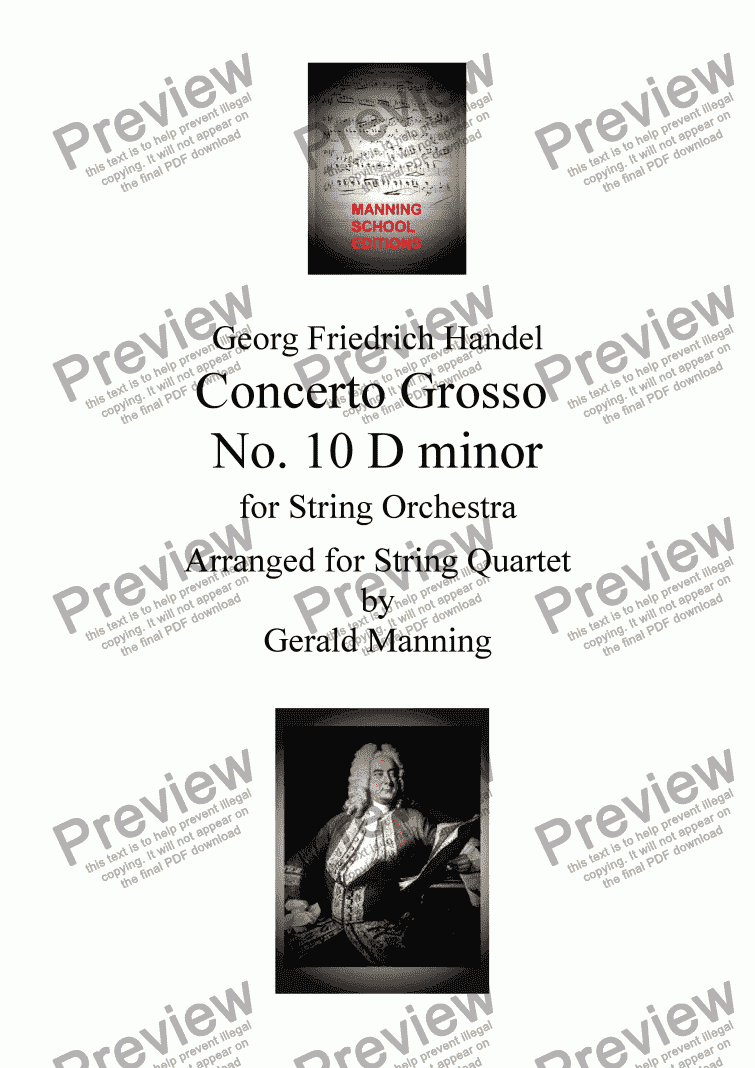 In his early childhood Handel showed a great love of music, but his father, unlike Mozart�s, tried to discourage him from becoming a musician, and when he entered the University of Halle at the age of 17, wished him to study law. The boy had studied with the organist Zachau who taught him to play the Harpsichord, Organ, Violin and also to compose, so when he went to University he was already an accomplished musician, and after only a year he left college and went to Hamburg to take up an appointment in the Opera House, first as a violinist and then as the orchestra�s Harpsichord player. Although considered by many scholars to be the great master of vocal style Handel is also regarded a master of instrumental style in his sonatas, organ concerti, harpsichord suites and of course his concerti grossi. Whereas Corelli who was thirty years older than Handel and Bach, and is considered together with Stradelli and Torelli as the originator of this genre of orchestral writing the precise date of Corelli�s concerti grossi has never been discovered, but most of Handel�s works are still left to us in the autographs and we know with some certainty that the twelve concerti grossi, op.6, were composed in London in 1739 and were completed in less than a month. He scored the works for solo violins and cello the �concertino obbligato� accompanied by string orchestra and oboes with continuo the �ripieno�. Compared with concertos of a later date the solo instruments have understated bravura passages. As Sonata form evolved and developed the Concerto Grosso was gradually replaced by the Concerto of Mozart�s time, but made a return in the neo-classic forms of the 20th Century when Ernest Bloch and Arnold Schonberg both composed Concerti Grossi. The present Concerti grossi in these arrangements appear absolutely in their original form where the autographs show few tempi markings and dynamics, consequently this is reflected in the scores, and where these have been added are wholly editorial.