Sign in / Register
HomeInstrumentationsQuintetWhat Shall We Do With The Drunken Recorder Consort?

What Shall We Do With The Drunken Recorder Consort?

By: Sea Shanty Arr:Keith Terrett
For: Quintet of Soprano Recorders
This music is in your basket
View basket
Loading... 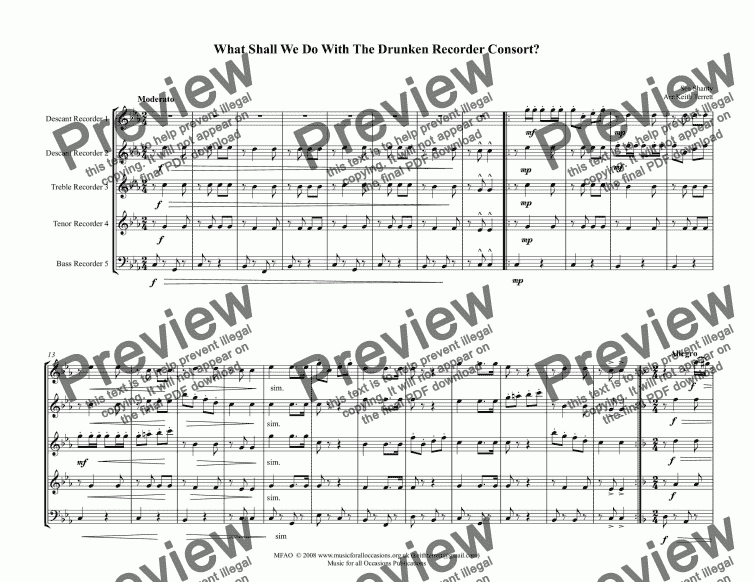 What Shall We Do With The Drunken Recorder Consort?

By: Sea Shanty Arr:Keith Terrett
For: Quintet of Soprano Recorders

Have fun with this arrangement, maybe walk on stage with a whiskey bottle or two!

The American Recorder Society have published my original composition ’’Havana Rhubarb Rumba’’ for Recorder septet. You can also purchase it here if you wish.

Drunken Sailor" began its life as a popular song on land at least as early as the 1900s, by which time it had been adopted as repertoire for glee singing at Eton College. Elsewhere in England, by the 1910s, men had begun to sing it regularly at gatherings of the Savage Club of London.

The song became popular on land in America as well. A catalogue of "folk-songs" from the Midwest included it in 1915, where it was said to be sung while dancing "a sort of reel." More evidence of lands-folk’s increasing familiarity with "Drunken Sailor" comes in the recording of a "Drunken Sailor Medley" (ca.1923) by U.S. Old Time fiddler John Baltzell. Evidently the tune’s shared affinities with Anglo-Irish-American dance tunes helped it to become readapted as such, as Baltzell included it among a set of reels.

The glut of writings on sailors’ songs and published collections that came starting in the 1920s and which supported a revival of interest in shanty-singing for entertainment purposes on land. As such, R.R. Terry’s very popular shanty collection, which had begun to serve as a resource for renditions of shanties on commercial recordings in the 1920s, was evidently used by the Robert Shaw Chorale for their 1961 rendition. The Norman Luboff Choir recorded the song in 1959 with the yet uncharacteristic phrasing, "What’ll we do…?

Reviews of What Shall We Do With The Drunken Recorder Consort?