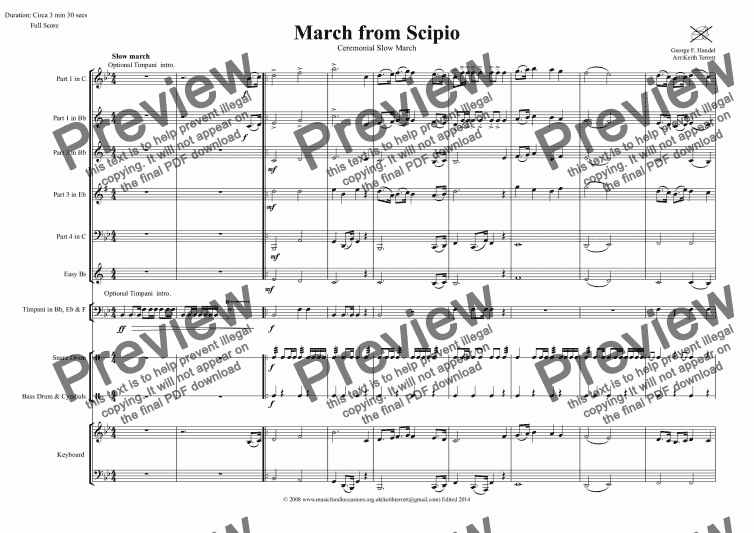 A transcription of Handel’s March from Scipio for Flexible Band.

If the parts you require are not here, e-mail me your requirements:keithterrett@gmail.com

The setting is New Carthage (Cartagena), 210 BCE, after the Roman army, led by Scipione has captured the city from the Carthaginians and their Spanish allies.

Scipione leads a procession of captives into the city through the triumphal arch. He anticipates future conquests and salutes his officers, with a particular laurel for Lelio. Lelio, in return, offers the prisoner Berenice to Scipione. Scipione is immediately attracted to Berenice, but vows to respect her honour. Berenice is in love with the Spanish prince Lucejo, who is among the Roman army incognito. He vows to rescue her. Lelio himself is attracted to another prisoner, Armira, but she will not return the affection whilst a prisoner. This begins to draw Lelio in sympathy with the female prisoners, although he does advise Berenice to accept Scipione’s affection.

The female prisoners are confined in a palace with a garden, but Scipione has forbidden strangers to enter. Still disguised, Lucejo breaches the garden, but hides when he hears Scipione approaching. Scipione tries to win over Berenice and proclaims his love for her. Lucejo cannot tolerate this, and betrays his presence by his exclamation. Berenice tries to protect Lucejo by calling him a madman and begging for mercy. Alone at the end of the act, Lucejo is unsure of Berenice’s motives and begins to become jealous.

Ernando, father to Berenice, has arrived to offer a ransom for his daughter and also friendship to Scipione. Scipione tries again to woo Berenice, but she again rejects his advances. After Scipione has left, Lucejo reappears, but she dismisses him. This confirms Lucejo’s initial jealous suspicions, but Berenice feels emotionally torn. Even with his jealous feelings, Lucejo does not completely break with Berenice, but he does pretend to express affection for Armina, in the expectation that Berenice will overhear this. Both Berenice and Armina are distressed at the situation, and Scipione arrives, angry to see Lucejo in the garden. Lucejo now confesses his identity and his plans, and challenges Scipione to a duel. Scipione orders the arrest of Lucejo. Berenice then admits that she could love a Roman, if she had not promised herself to another.

Scipione offers Ernando freedom for Berenice, on condition that he may marry her. Ernando replies that he would willingly give up his life and kingdom, but that he cannot break his earlier promise to Lucejo of Berenice in marriage. This nobility impresses Scipione, who then plans to send Lucejo to Rome as a prisoner. He further ponders the situation, and resolves to sacrifice his own personal desires for the greater happiness of the others. He tells Berenice of his change of mind and heart. He accepts the ransom offer from Ernando and frees Berenice, saying that she may marry Lucejo. Furthermore, he gives the ransom to the couple as a wedding present. All present praise Scipione’s generosity, and Lucejo vows loyalty to Rome for himself and his subjects. 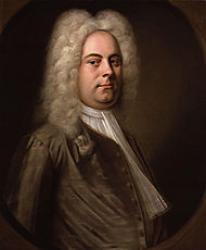