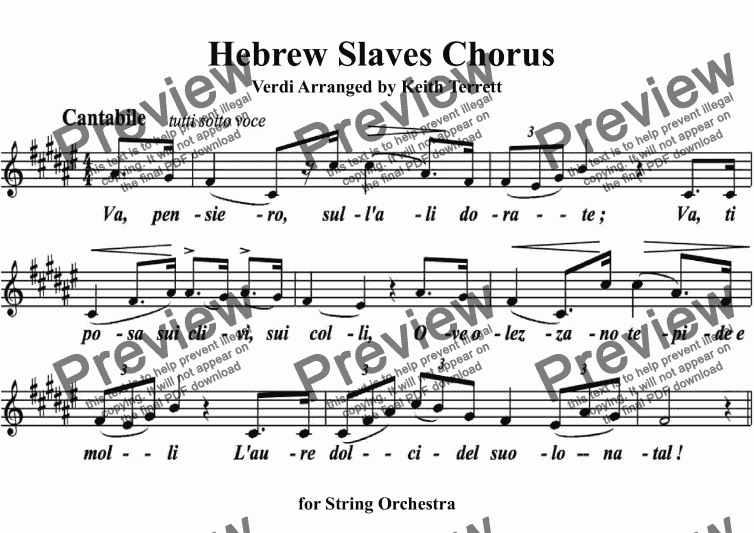 An arrangement of the Hebrews Slaves Chorus by Verdi, arranged for String Orchestra.

Great lollipop for your next concert!

Va, pensiero" (Italian: [va penˈsjɛro]), also known in English as the "Chorus of the Hebrew Slaves", is a chorus from the third act of the opera Nabucco (1842) by Giuseppe Verdi, with a libretto by Temistocle Solera, inspired by Psalm 137. Known as Verdi’s "Jewish" work of art, it recollects the story of Jewish exiles in Babylon after the loss of the First Temple in Jerusalem. The opera with its powerful chorus established Verdi as a major composer in 19th-century Italy. The full incipit is "Va, pensiero, sull’ali dorate", meaning "Fly, thought, on the golden wings" (note that the first word is in modern orthography spelled Va’, with an apostrophe, but this is absent in the libretto.)

Some scholars initially thought that the chorus was intended to be an anthem for Italian patriots, who were seeking to unify their country and free it from foreign control in the years up to 1861 (the chorus’s theme of exiles singing about their homeland, and its lines like O mia patria, si bella e perduta / "O my country, so lovely and so lost" was thought to have resonated with many Italians). Some modern scholarship has rejected this idea, failing to see connections between Verdi’s 1840s and 1850s operas and Italian nationalism, with the exception of some of the sentiments expressed in his 1843 opera, I Lombardi.

Other recent research has discussed several of Verdi’s works from the 1840s (including Giovanna d’Arco and Attila) emphasising their ostensible political meaning. Work by Philip Gossett on choruses of the 1840s also suggests that recent revisionist approaches to Verdi and the Risorgimento may have gone too far in their thorough dismissal of the political significance of "Va, Pensiero".

In 2011 after playing "Va, pensiero" at a performance of Nabucco at the Teatro dell’Opera in Rome, conductor Riccardo Muti held a short speech protesting cuts in Italy’s arts budget, then asked the audience to sing along in support of culture and patriotism.

Verdi composed Nabucco at a difficult moment in his life. His wife and small children had all just died. He had contracted with La Scala to write another opera and the director forced the libretto into his hands. Returning home, Verdi happened to open the libretto at "Va, pensiero" and seeing the phrase, he heard the words singing. At first rehearsal "the stagehands shouted their approval, then beat on the floor and the sets with their tools to create an even noisier demonstration". As he was subsequently to note, Verdi felt that "this is the opera with which my artistic career really begins. And though I had many difficulties to fight against, it is certain that Nabucco was born under a lucky star".

Upon Verdi’s death, along his funeral’s cortege in the streets of Milan, bystanders started spontaneous choruses of "Va, pensiero…" A month later, when he was reinterred alongside his wife at the ’Casa di Riposo’, a young Arturo Toscanini conducted a choir of eight hundred in the famous hymn. 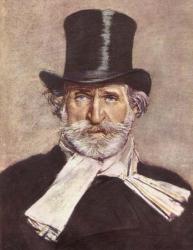