Hail to the Chief

By: James Sanderson
For: String quartet
This music is in your basket
View basket
Loading... 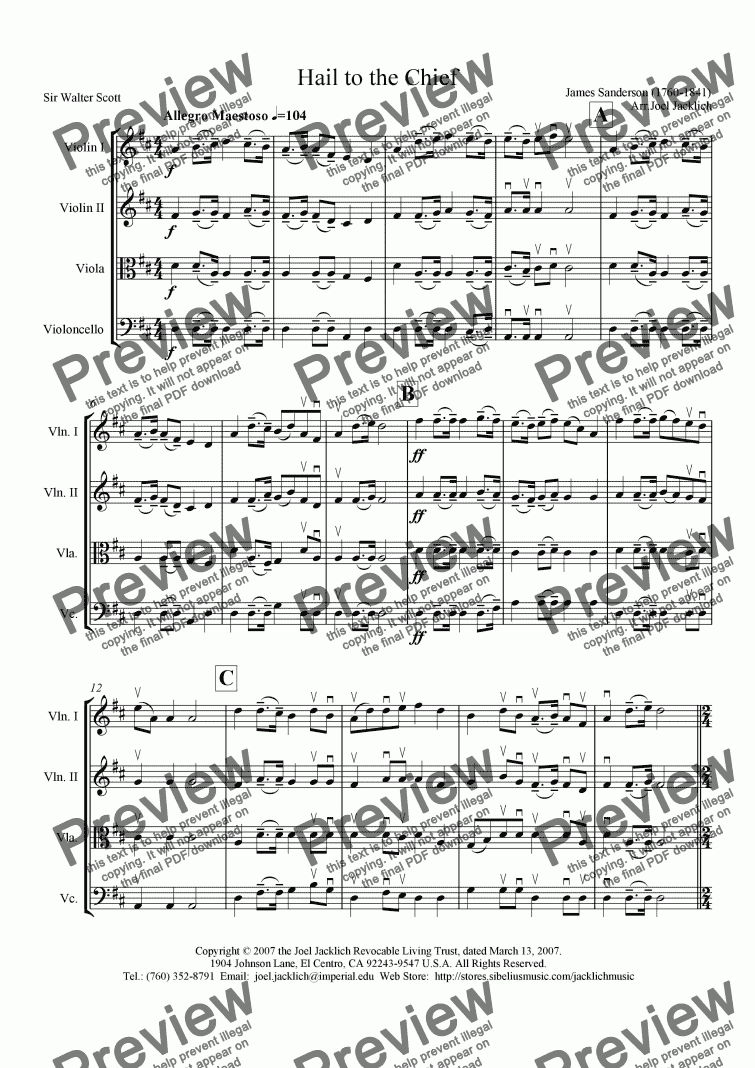 Hail to the Chief

By: James Sanderson
For: String quartet

This string quartet arrangement of �Hail to the Chief� was arranged for the Navy Birthday Ball to take place at the Naval Air Facility, El Centro this October, for the first toast of the evening, the toast to the Commander in Chief, the President of the United States.

Hail to the Chief who in triumph advances! Honored and blessed be the ever-green Pine! – "The Lady of the Lake" by Sir Walter Scott

"Hail to the Chief" sounds forth as the President of the United States arrives at any formal occasion. Who would guess that its origins lay in Sir Walter Scott’s poem, "The Lady of the Lake," which narrates how a Scottish Highlands clan loses its heritage and land to an imperialist invader?

Published on May 8, 1810, Scott’s work secured the author international fame and broke all records by selling 25,000 copies in eight months. The narrative’s adventurous plot and carefully drawn characters were ripe for stage production. In the following year at least three productions were mounted in London theaters and one in Edinburgh, Scotland. The latter, produced by Edmund John Eyre, also opened in Philadelphia’s New Theater on January 1, 1812, with music "partly composed, and partly selected, by Mr. J. A. Jones." Among the tunes that Jones selected to include was James Sanderson’s "Hail to the Chief," written for one of the London productions.

Sanderson was the conductor of London’s Surrey Theater orchestra and wrote many songs for local theatrical productions. He set "Hail to the Chief" to the words of Stanza XIX of the Second Canto of Scott’s "Lady of the Lake," a section referred to by the poet as "The Boat Song." The poem’s "Chief" was the Scottish folk hero Roderick Dhu, who strove to protect the Douglas clan from their enemy, King James V, but died at the monarch’s hand. The story apparently had a particular resonance in America during the War of 1812 because it explored conflicting values while acknowledging both the good and the bad aspects of each contending system. The first U.S. sheet music for "Hail to the Chief" was published in Philadelphia under the title "March and Chorus, ’Hail to the Chief,’ in the Dramatic Romance of The Lady of the Lake," at about the same time the play ran.

"Hail to the Chief" was first associated with a Chief Executive on February 22, 1815, when it was played (under the title "Wreaths for the Chieftain") to honor both the belated George Washington and the end of the War of 1812. Andrew Jackson was the first living president to be personally honored by "Hail to the Chief," on January 9, 1829. The tune was among a number of pieces played for Martin Van Buren’s inauguration ceremony on March 4, 1837, and for social occasions during his administration. As one party-goer recalled:

"The Marine Band…is always ordered from the Navy Yard and stationed in the spacious front hall, from which they swell the rich saloons of the palace with "Hail to the Chief," "Wha’ll Be King but Charley," and other humdrum airs, which ravish with delight the ears of warriors, who have never smelt powder."

It was Julia Tyler, the wife of President John Tyler, who first requested that "Hail to the Chief" be played specifically to announce the President’s arrival on official occasions. The tune was included in certain nineteenth century musical instruction books and the future First Lady, Sarah Childress Polk, studied it as a young woman. It was played at her husband James Polk’s inauguration but she, perhaps more than others, ritualized its use. As the historian William Seale stated, Polk was not an impressive figure, so some announcement was necessary to avoid the embarrassment of his entering a crowded room unnoticed. At large affairs the band…rolled the drums as they played the march…and a way was cleared for the President.

President Chester Arthur was not fond of the tune and asked John Philip Sousa to compose a new herald. Sousa, then Director of the Marine Band, responded with the "Presidential Polonaise" - nonetheless "Hail to the Chief" endured. President Truman, an amateur musicologist, spent time tracing the origins of the piece and in 1954 the Department of Defense established it as the official musical tribute to the U.S. President.

Notes from the Library of Congress http://lcweb2.loc.gov/diglib/ihas/loc.natlib.ihas.200000009/default.html

Reviews of Hail to the Chief