By: Cedric Peachey
For: Choir + keyboard
This music is in your basket
View basket
Loading... 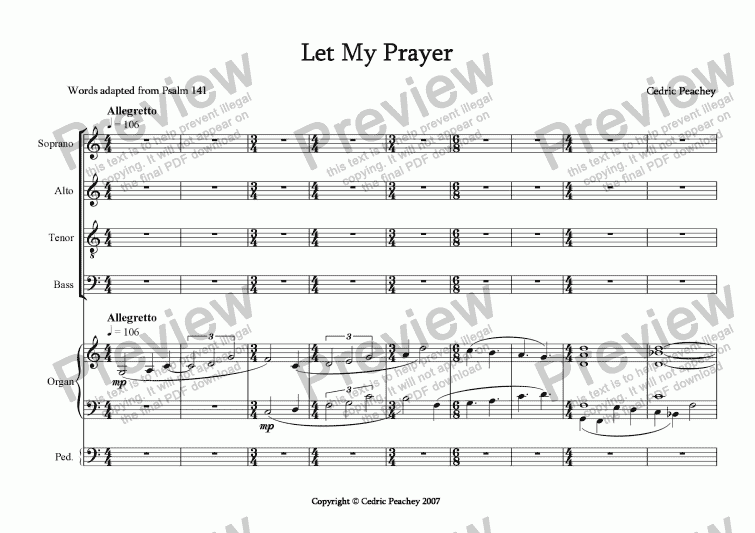 By: Cedric Peachey
For: Choir + keyboard

Composer
Cedric Peachey
Difficulty
Difficult (Grades 7+)
Duration
8 minutes
Genre
Modern classical music
License details
For anything not permitted by the above licence then you should contact the publisher first to obtain permission.

This setting of lines taken from Psalm 141 has occupied me for more years than I care to count. To finally find I had the impetus to complete the piece in 2007 was therefore somewhat disconcerting. For more secularly-minded listeners, I retain the fond hope that the music may find favour even where the text might not.

With a performance of this piece in London scheduled for 2009, I sought and received a very helpful critique from David Monks, a fellow composer on SibeliusMusic. I have incorporated many of David’s suggestions in this revised score. David’s willingness to share his experience of choral music as well as his insights as a conductor of a choir were invaluable and I am deeply indebted to him for his time and trouble. For those who don’t know his music, I would recommend they try his setting of Baudelaire’s ’S�pulture’:

On 16th May 2009, this piece had its first public performance at St Gabriel’s Church, Pimlico, London in a programme of Spring Concerts organised by Forum London Composers Group. The choir - the Forum Cantata conducted by John Holland - came together specifically for one concert and had to practise and perform three pieces the same day, of which this was one. No small challenge, but one they responded to with skill, musicianship and unflagging enthusiasm. The organist was William Whitehead, Professor of Organ at Trinity College of Music.

The attached mp3 is taken from their performance and I am grateful to all the performers for their kind permission to post this recording on SibeliusMusic.

Should anyone wish to perform this motet, please note that paying for and printing off a copy of the Choir Part entitles you to make up to 25 photocopies for use by members of the choir.

Reviews of Let My Prayer