Sign in / Register
HomeInstrumentationsString quartetReliquary of Sacred Music - Handel, G.F. - Solos 'Thy Rebuke', 'Behold and see', 'He was cut off' and 'But Thou didst not leave', from Messiah - arr. for Solo Tenor and String Quartet by Gerald Manning

Reliquary of Sacred Music - Handel, G.F. - Solos 'Thy Rebuke', 'Behold and see', 'He was cut off' and 'But Thou didst not leave', from Messiah - arr. for Solo Tenor and String Quartet by Gerald Manning

By: G.F. HANDEL
For: String quartet
This music is in your basket
View basket
Loading... 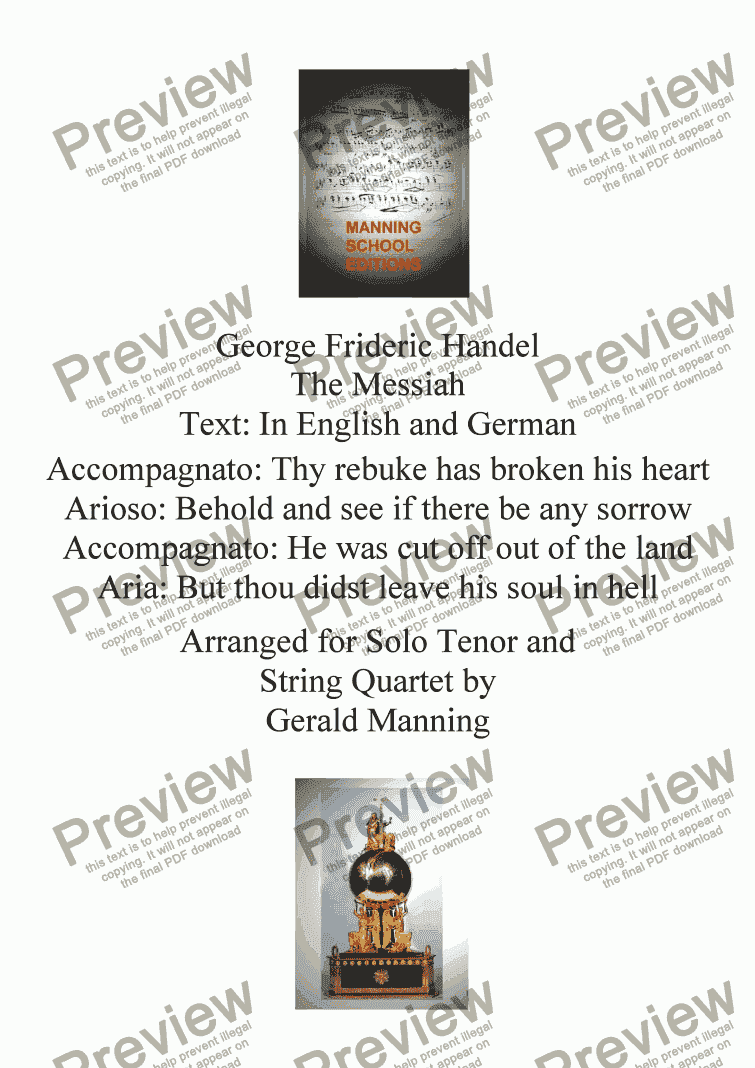 Reliquary of Sacred Music - Handel, G.F. - Solos 'Thy Rebuke', 'Behold and see', 'He was cut off' and 'But Thou didst not leave', from Messiah - arr. for Solo Tenor and String Quartet by Gerald Manning

By: G.F. HANDEL
For: String quartet

Composer
G.F. HANDEL
Year of composition
1742
Arranger
Gerald Manning
Lyricist
From the Bible
Publisher
MANNING SCHOOL
Difficulty
Difficult (Grades 7+)
Duration
5 minutes
Genre
Classical music
License details
For anything not permitted by the above licence then you should contact the publisher first to obtain permission.

The oratorio Messiah was composed in the white heat of inspiration. Handel was like a man possessed with little sleep, and even less sustenance he completed his task in just 24 days, and was often reduced to tears of emotion by the enormity of his vision of our Lord�s life, death and resurrection. The work is in three parts; part one tells of the immaculate conception of the blessed Virgin and the good tidings of His birth, the shepherds in the fields �keeping watch over their flocks by night�, the great rejoicing and the foretelling of the miracles; the great last chorus of Part I, �His yoke is easy� with it�s virtuosic choral writing ends the first part in positive affirmation.

In part two the suffering and passion of His life and death are told in music, which positively burns in its intensity and the musical canvas, is vast in its visionary genius. The first big chorus �Behold The Lamb of God� is breathtakingly beautiful in its intensity and the Alto Air �He was despised�, which follows, is full of the pathos of scorn, and then the most incredible music occurs in the magnificent triptych of choruses starting with �Surely He Hath Borne Our Grief�s�. The second part ends with the �Hallelujah� chorus when Handel allegedly remarked after he composed that great chorus, �I did think I saw all Heaven before me and the great God himself.�

�I Know that my Redeemer liveth� opens the third part of the work which tells of the resurrection of Christ and the great judgement day when we shall all be changed at the sound of the last trumpet. The work closes with the chorus �Worthy is the Lamb� which leads into the final Amen.

Reviews of Reliquary of Sacred Music - Handel, G.F. - Solos 'Thy Rebuke', 'Behold and see', 'He was cut off' and 'But Thou didst not leave', from Messiah - arr. for Solo Tenor and String Quartet by Gerald Manning