By: Mozart
For: Quartet of Euphoniums in Bb [bass clef]
This music is in your basket
View basket
Loading... 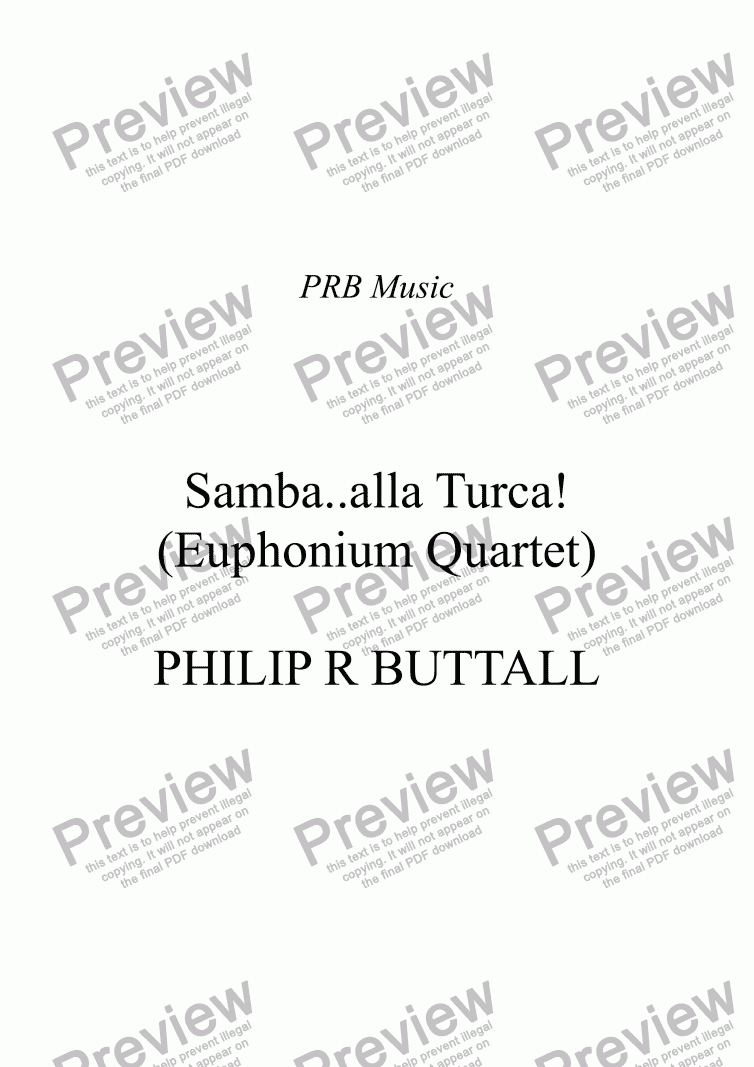 By: Mozart
For: Quartet of Euphoniums in Bb [bass clef]

Composer
Mozart
Year of composition
2008
Arranger
Philip R Buttall
Publisher
PRB Music
Difficulty
Difficult (Grades 7+)
Duration
4 minutes
Genre
Classical music
License details
For anything not permitted by the above licence then you should contact the publisher first to obtain permission.

Some while back, I was asked to produce a trombone arrangement for The Lone Ar-ranger! Fellow-SibeliusMusic-composer, Stuart Blake, of Malvern, Worcestershire, with whom I’d been in touch on a number of occasions, asked if I could provide trombone parts in the Treble Clef, the usual Brass Band layout, which I was happy to do, especially as Stuart tidied up the parts in terms of placements of dynamics.
A few days ago, Stuart made contact again, as he’d seen my bassoon version of Samba..alla Turca!, and thought that, with the minumum of tweaking, this would make another good piece for a euphonium quartet that Stuart now plays in.
If you’re not a brass player, as I’m not, you tend to have to rely on the ranges suggested by Sibelius which, as Stuart confirmed, do rather err on the conservative side. So, I was again delighted when Stuart agreed to check the ranges, tidy up the parts, as well as produce a corresponding set in the bass clef, for those who prefer it.
The attached photo shows Stuart, and son, Michael, playing in their euphonium quartet, Euphology, at Upton-upon-Severn.

Recently I had a contact from Martin Tousignant, of Augusta, Georgia, who wrote: ’ Regarding your euphonium quartet version of Samba alla Turca, although it is possible to play the 4th part on euphonium, an Eb (or F) tuba would be a much better fit. I would therefore suggest notating the 4th part for Eb tuba. Here in the USA an F tuba player (including myself) would simply use the bass clef part."

I have therefore added a version of Euphonium 4 both for Tuba in F (bass clef -actual pitch). and for Tuba in Eb (treble clef, suitably transposed). I have also done similarly, for Euphonium 3.