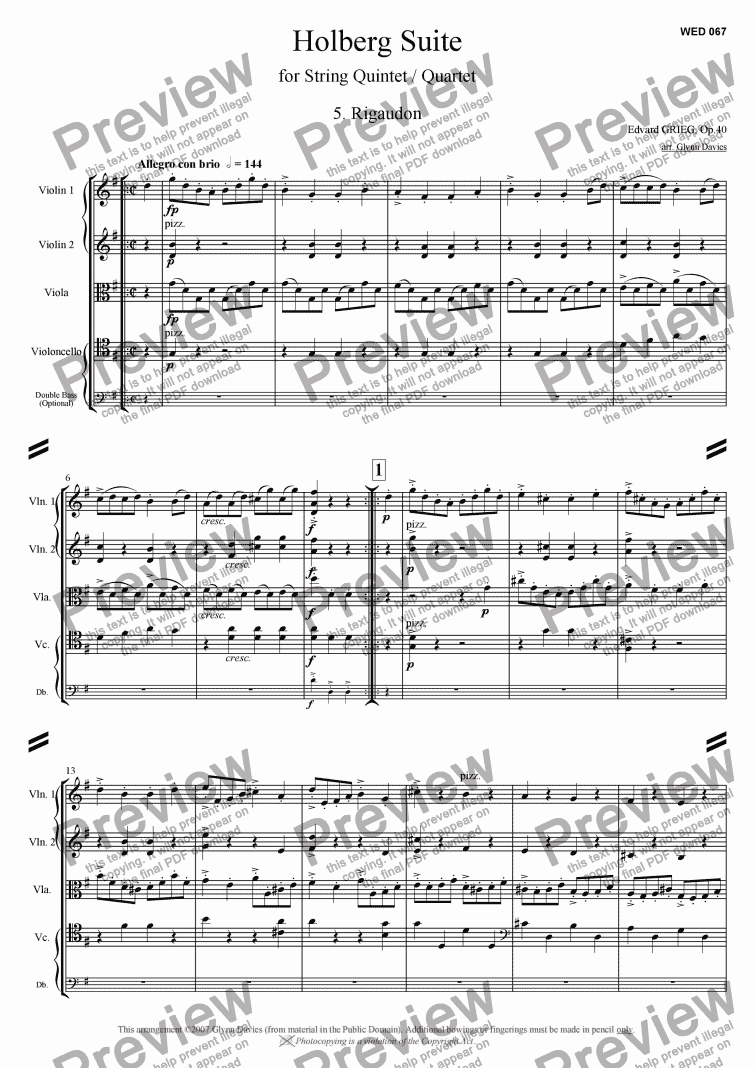 Composer
Edvard Grieg
Year of composition
1885
Arranger
Glynn Davies
Difficulty
Difficult (Grades 7+)
Duration
3 minutes
Genre
Classical music
License details
For anything not permitted by the above licence then you should contact the publisher first to obtain permission.

While most every work, large or small, produced by composer Edvard Grieg bears the stamp of rightness and focused simplicity, writing music did not always come easily to him. During many of his earlier years, other duties were necessary for making ends meet � directing the Harmonien Orchestra of Bergen, for example. Even over his final two decades, Grieg was obliged to undertake grueling tours as a piano soloist. In 1885, a new home, Troldhaugen, began to provide a place of solitude and comfort. Despite the fact that Ludvig Holberg (1684-1754) lived most of his life in Denmark and was considered the father of Danish literature, his birthplace was Bergen, Norway, and on the bicentenary of his birth, Norwegians heartily celebrated. Even as a resident of Denmark, Holberg recalled his childhood in his works and celebrated the time he spent there. Educated at the universities of Copenhagen and Oxford, Holberg is regarded as having established Danish as a literary language. Prior to his time, Danish was employed only in ballads and hymns; plays were presented in French or German. Besides more than a dozen successful plays (several of them comedies), he wrote a history of his adopted country and published a collection of philosophical treatises. Notwithstanding his stronger relationship to Denmark, Norwegians were pleased to acknowledge Holberg, and Grieg, also a Bergen native, was one of those who directed the planning for the event. As early as 1878, he contributed a fee from his publisher toward the construction of a Holberg statue in Bergen. Further, he wrote two works, the first for male voices, a Cantata for the Unveiling of the Holberg Memorial, and a second (of more lasting consequence) entitled From Holberg's Time: Suite in Olden Style. Grieg himself premiered the piano suite just days after the dedication of the memorial. Its great success led Grieg to score it for string orchestra the following year, and both versions enjoy enduring popularity. The suite in five sections was intended by Grieg to recall the dance suites that might have been heard during Holberg's lifetime, which roughly corresponded to the period of the late Baroque. The final section, a Rigaudon, returns the listener to the buoyant mood of the beginning prelude. Through each of the five sections, the level of invention is matched by a refinement and purity of feeling that marks this as among the most cherishable short works of the late nineteenth century.

This arrangement is for string quartet with an optional double bass part.