By: Narisa Chan
For: Orchestra
This music is in your basket
View basket
Loading... 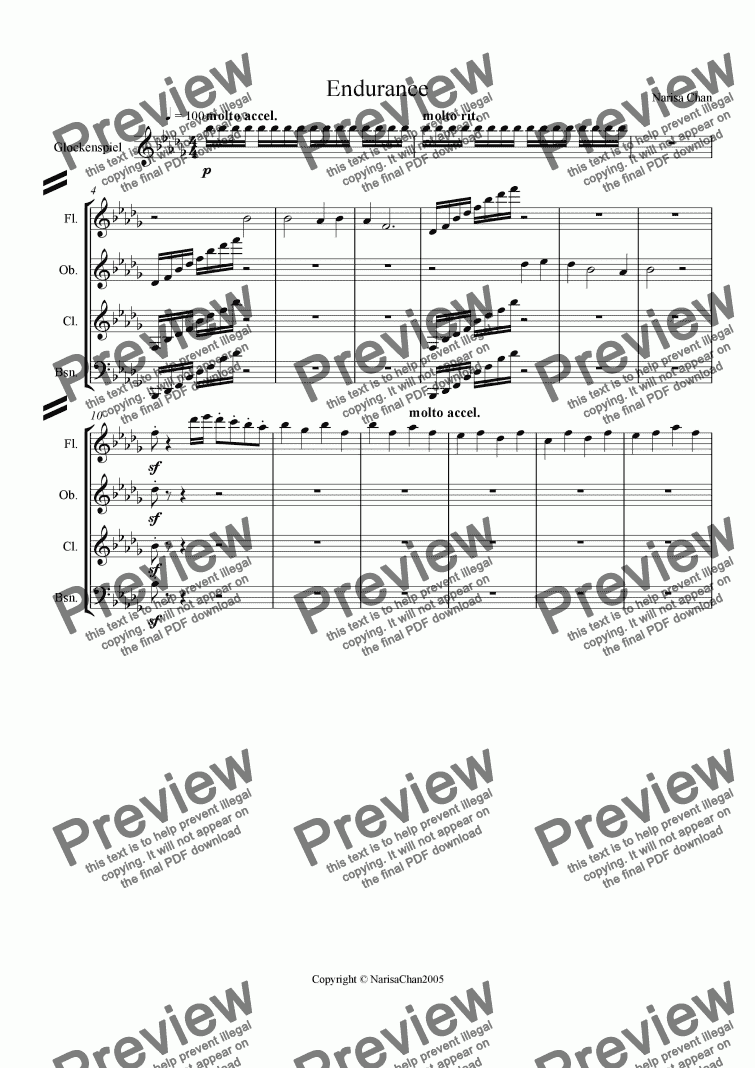 By: Narisa Chan
For: Orchestra

Composer
Narisa Chan
Year of composition
2005
Lyricist
none
Difficulty
Moderate (Grades 4-6)
Duration
7 minutes
Genre
Modern classical music
License details
For anything not permitted by the above licence then you should contact the publisher first to obtain permission.

Based on part 2 of Yann Martel’s "Life of Pi" which tells the story of a boy shipwreked in a life boat with a tiger, a hyena, an orang utan and a zebra.

Bar 1-2: The glockenspiel symbolises the approach to land at the end of Pi’s 227 day journey.

Bar 10-36: Flashback to the storm that initially sink the ship

Bar 68-82: Pi realises that he must train Richard Parker to keep himself alive. As the woodwinds get more disjointed (78-81), Richard Parker loses his footing and Pi gains the upper hand.

Bar 83-84: The glockenspiel symbolises the approach to land again. This time on an island.

Rehearsal mark B (bar 85)-bar 93: The hope of salvation, food, water and shelter after many days at sea. Note the theme is only played by the brass giving it an empty feel because the island is an empty solution to Pi’s problem.

Bar 101-Rehearsal mark C (bar 121): Pi and Richard Parker enjoy their time on the island, filling their bellies with food.

Bar 122-125: Pi discovers that the island is cannabalistic and leaves, only to head into another storm.

Bar 126-Rehersal mark D (bar 145): After the storm, Pi loses his sight due to malnutrition and bumps into another lifeboat from the same ship he was on that had sunk. On it is a french cook (horn), a wounded sailor (trombone) and Pi’s mother (violins).

Rehearsal mark D-E (bar 146-157): Due to his blindness, it is not clear whether what Pi hears is real and the glockenspiel in the background serves to suspend reality. The french cook tells Pi that he ate the wounded sailor and Pi’s mother to survive and attempts to board Pi’s boat only to be eaten by Richard Parker.

Rehearsal mark E (bar 158)- bar 179: As Pi’s strength fades, he sees a ship in the distance. He calls out to the large approaching container ship but they don’t see him and sail in to the distance (bar 168-179). His hope of rescue is gone.

Bar 180-194: The glockenspiel re-enters and the scene at the start is repeated i.e. Pi’s approach to land.

Sorry, there's no reviews of this score yet. Please .
In order to submit this score to ScoreExchange.com Narisa Chan has declared that they own the copyright to this work in its entirety or that they have been granted permission from the copyright holder to use their work. If you believe that this score should be not available here because it infringes your or someone elses copyright, please report this score using the copyright abuse form.