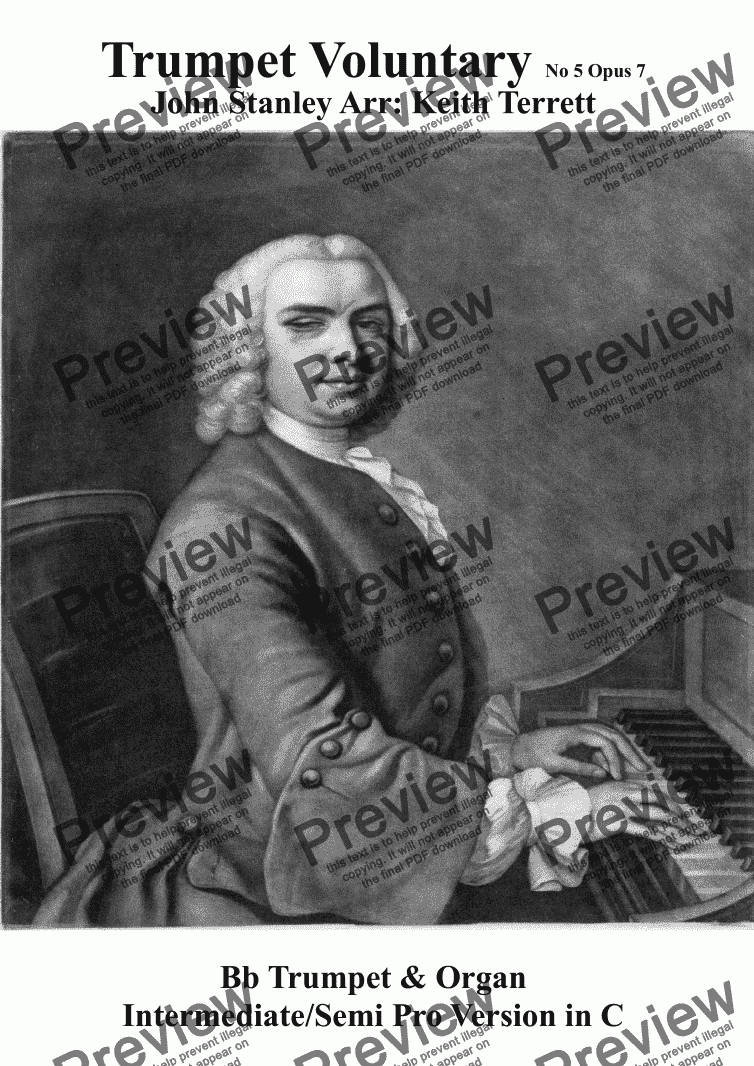 Composer
John Stanley
Year of composition
1748
Arranger
Keith Terrett
Year of arrangement
2014
Lyricist
Keith Terrett
Publisher
Music for all Occasions
Difficulty
Difficult (Grades 7+)
Duration
3 minutes
Genre
Classical music
License details
For anything not permitted by the above licence then you should contact the publisher first to obtain permission.

An arrangement of Stanley’s Trumpet Voluntary No 5 Opus 7with full Organ accompaniment, for semi-pro players.

My thanks are extended to Organist David Wheatley, for allowing me to study his Organ writing in depth.

If you need a different part, e-mail me your requirements, and I will up-load parts within 24hrs:keithterrett@gmail.com

If you are in a hurry, I can arrange to e-mail you a set of PDf parts.

Stanley’s works include the opera Teraminta, the dramatic cantata The Choice of Hercules, twelve other cantatas with texts by John Hawkins, the oratorios Jephtha, The Fall of Egypt and Zimri, and instrumental music, notably three volumes of Voluntaries for organ (1748, 1752, and 1754). Nearly all of the voluntaries feature a short, slow introduction followed by either a solo-stop movement.

Here is a link to a live performance of the Pro version in D: https://uk.video.search.yahoo.com/search/video;_ylt=AwrJS5j8zvtfkyEAZyoM34lQ;_ylu=Y29sbwNpcjIEcG9zAzEEdnRpZAMEc2VjA3Nj?p=keith+terrett+youtube&fr=mcafee#id=11&vid=c29d621f71bcda969ac75445a422656c&action=view

Great sounding arrangement in a sensible key for younger/amateur players not ready for the higher keys of C & D.

Love the written out embellishments.