By: trad.
For: Duet of Soprano Recorders
This music is in your basket
View basket
Loading... 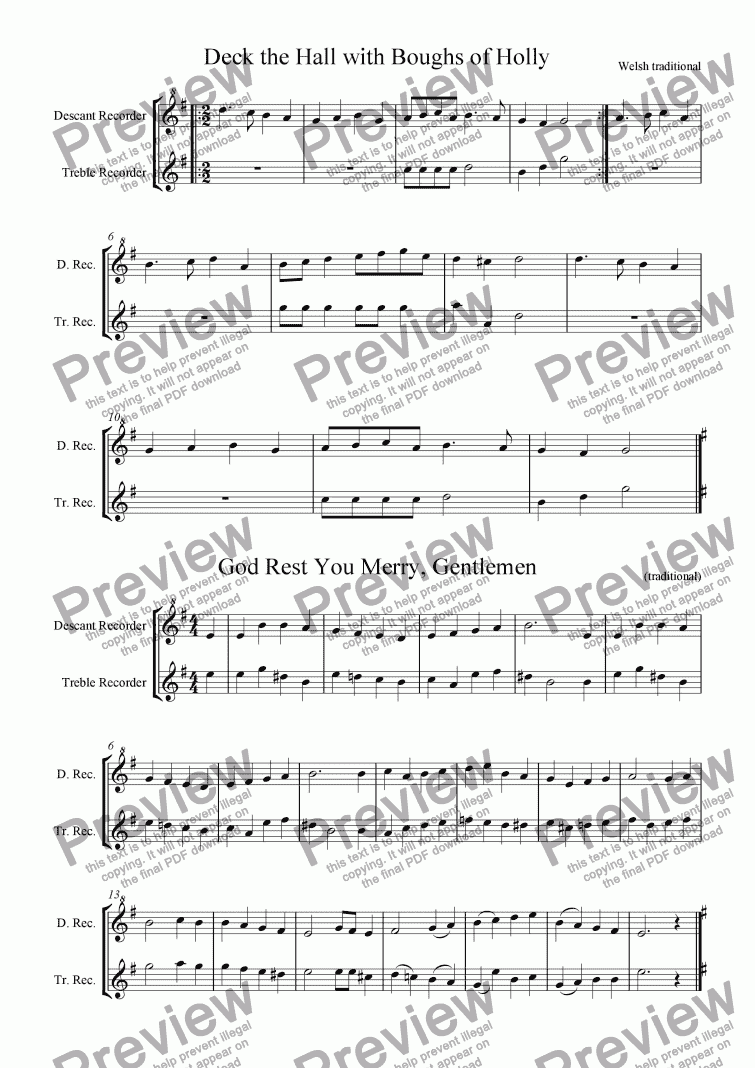 By: trad.
For: Duet of Soprano Recorders

Composer
trad.
Arranger
Martin Grayson
Lyricist
none
Difficulty
Easy (Grades 1-3)
Duration
7 minutes
Genre
Classical music
License details
For anything not permitted by the above licence then you should contact the publisher first to obtain permission.

These are two part arrangements of 11 famous carols originally for treble and tenor recorders. The carols are Deck the Hall, God Rest You Merry, Good King Wenceslas, It Came Upon the Midnioght Clear, Joy to the World, O Come All Ye Faithful, See Amid the Winter's Snow, The Holly and the Ivy, While Shepherds Watched, Unto Us a Boy is Born and Hark! The Herald Angels Sing.

They originally used a tenor recorder for the 2nd part to give a nice deep sonority but it was immediately realized that many primary schools do not have tenor recorders, so this version for descant and treble was made.

The words have not been added as it is likely schools will already have them in the many collected editions of carols and recorder players will have sung the carols and so will know how to phrase them. The harmony is mostly compatible with familiar versions but an emphasis has been made on creating effective two part writing.

The edition, though concieved with recorder ranges in mind, can obviously be played on two other instruments provided you allow for the 2nd part being down the octave, (or the 1st part up the octave as for recorders).

Trio Sonata in E-minor, arr. to g-minor for recorders, If You Love Me and Divertimento

Sorry, there's no reviews of this score yet. Please .
In order to submit this score to ScoreExchange.com Martin Grayson has declared that they own the copyright to this work in its entirety or that they have been granted permission from the copyright holder to use their work. If you believe that this score should be not available here because it infringes your or someone elses copyright, please report this score using the copyright abuse form.