Sign in / Register
HomeInstrumentationsWorksheetsChromatic Etudes for All Instruments (treble clef)

By: Nathan Wright Shirley
For: Worksheets
This music is in your basket
View basket
Loading... 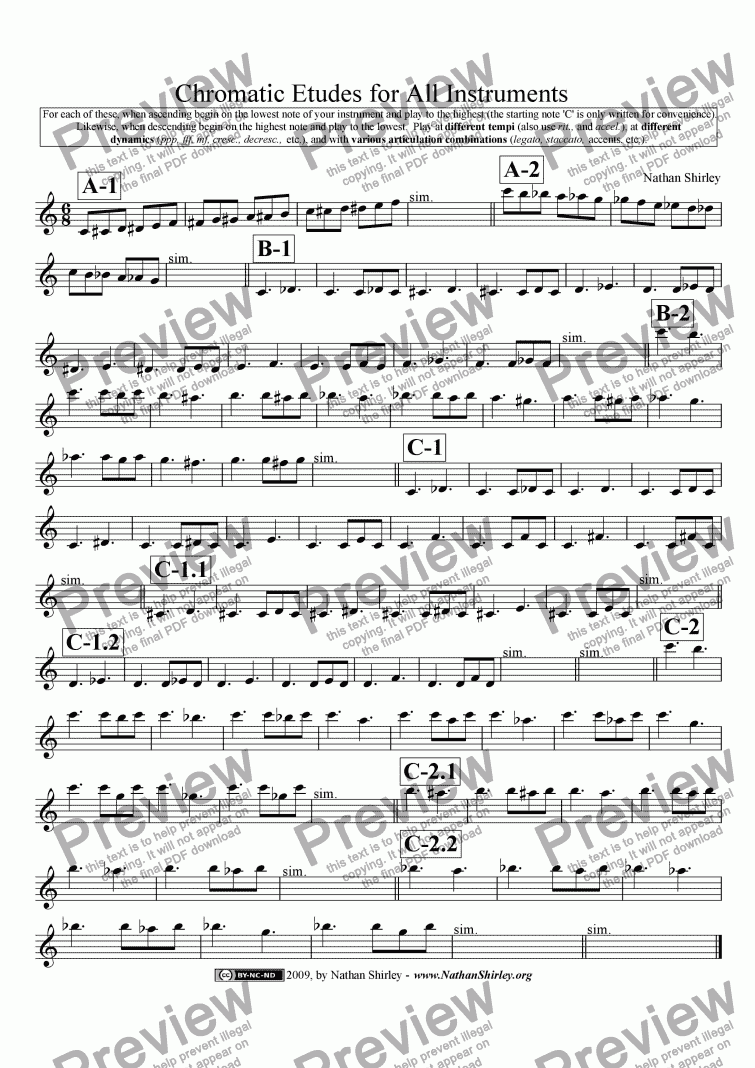 By: Nathan Wright Shirley
For: Worksheets

Composer
Nathan Wright Shirley
Year of composition
2009
Lyricist
none
Difficulty
Moderate (Grades 4-6)
Duration
1 minute
Genre
Other
License details
For anything not permitted by the above licence then you should contact the publisher first to obtain permission.

These etudes may be practiced on any chromatic instrument. It is best to memorize these 3 basic patterns, and play them without music. Also available for bass clef, written two octaves lower.

It should also be encouraged to modify these etudes when practicing- shorten the repetition of notes, change rhythms, add repetitions of notes, etc.

FOR FURTHER PRACTICE- Play through again using the same patterns and principals as established in the chromatic etudes, but now with whole tones instead of half (using a whole tone scale as opposed to a chromatic scale). So, C, D, E, F#, G#, A#, C, D, and so on, in all ranges and starting notes (including C#, D#, F, G, A, B, C#, D#, etc. in all it's combinations). Next, play it all in minor thirds, using the same patterns as before. Next, play in major 3rds, then 4ths, then tritones, 5ths, minor 6ths, etc… at least up octaves. Next, after all that is mastered, you could continue the etude based on scales, starting with the octatonic scale (half tone, whole tone, half tone, whole tone, half tone, whole tone, half tone, whole tone). This would probably be a good place to stop, but if you wish to continue, you would next play it with arpeggios, major, minor, and then with the 4 major and minor 7th arpeggios. Next, play it with a diatonic western scale (C, D, E, F, G, A, B, C) which would take you through all the keys. Next, play it with any other scale you like, a pentatonic scale, a blues scale, a gypsy scale, etc. Of course you could keep going on almost forever, but first you might want to be screened for savant syndrome.

Reviews of Chromatic Etudes for All Instruments (treble clef)

Sorry, there's no reviews of this score yet. Please .
In order to submit this score to ScoreExchange.com Nathan Wright Shirley has declared that they own the copyright to this work in its entirety or that they have been granted permission from the copyright holder to use their work. If you believe that this score should be not available here because it infringes your or someone elses copyright, please report this score using the copyright abuse form.