Sign in / Register
HomeInstrumentationsSolo instrumentRODE, P. - No.1 from 24 Caprices for Solo Violin transcribed for the Viola by Gerald Manning

RODE, P. - No.1 from 24 Caprices for Solo Violin transcribed for the Viola by Gerald Manning

By: Pierre Rode
For: Solo instrument (Solo Viola)
This music is in your basket
View basket
Loading... 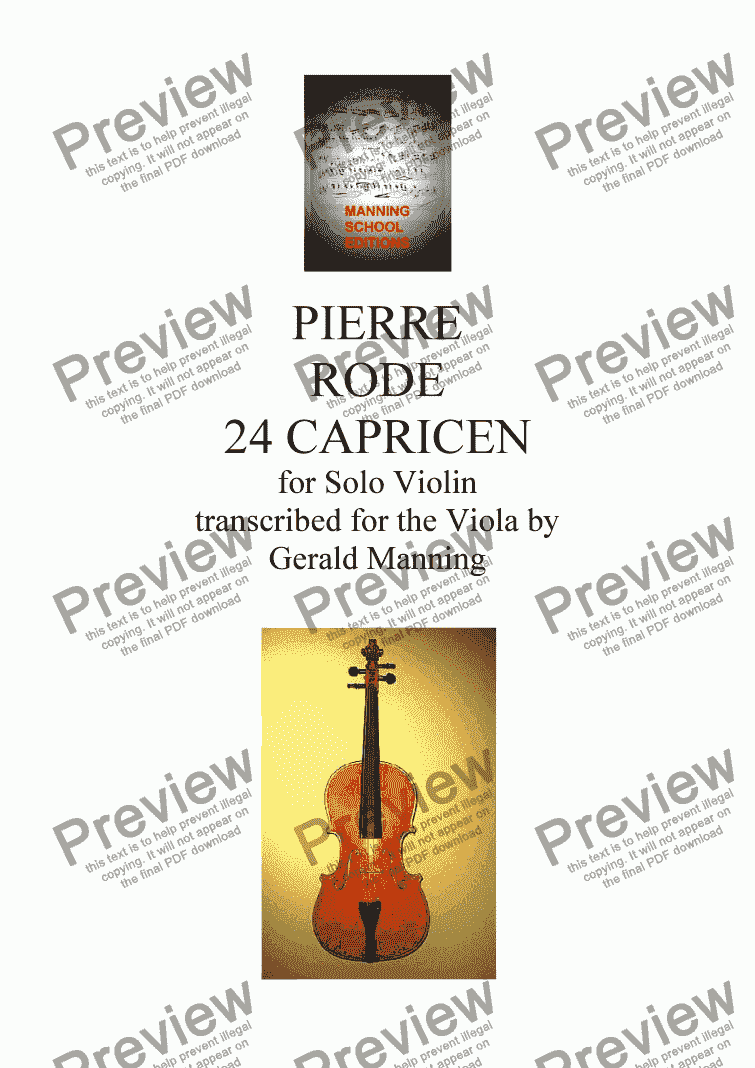 RODE, P. - No.1 from 24 Caprices for Solo Violin transcribed for the Viola by Gerald Manning

Composer
Pierre Rode
Year of composition
1800
Arranger
Gerald Manning
Publisher
MANNING SCHOOL
Difficulty
Difficult (Grades 7+)
Duration
3 minutes
Genre
Classical music
License details
For anything not permitted by the above licence then you should contact the publisher first to obtain permission.

PIERRE RODE 24 CAPRICEN No.1 IN THE FORM OF ETUDES FOR SOLO VIOLIN IN ALL 24 KEYS

For the serious student of the violin the 24 Caprices placed alongside those of Kreutzer, Don�t, Wieniawski and Paganini remain essential building blocks for a well-rounded and secure technique and sound education on the violin. They are also a necessary adjunct and have great value when transcribed for the Viola. As that great violin pedagogue Leopold Auer says � There is no instrument whose absolute mastery at a later period presupposes such meticulous care and exactitude in the initial stages of study as does the violin.�

Reviews of RODE, P. - No.1 from 24 Caprices for Solo Violin transcribed for the Viola by Gerald Manning