Sonata in G minor, Vol. I, No. 11, arr. for viola and string orchestra

By: Henry Eccles
For: String orchestra
This music is in your basket
View basket
Loading... 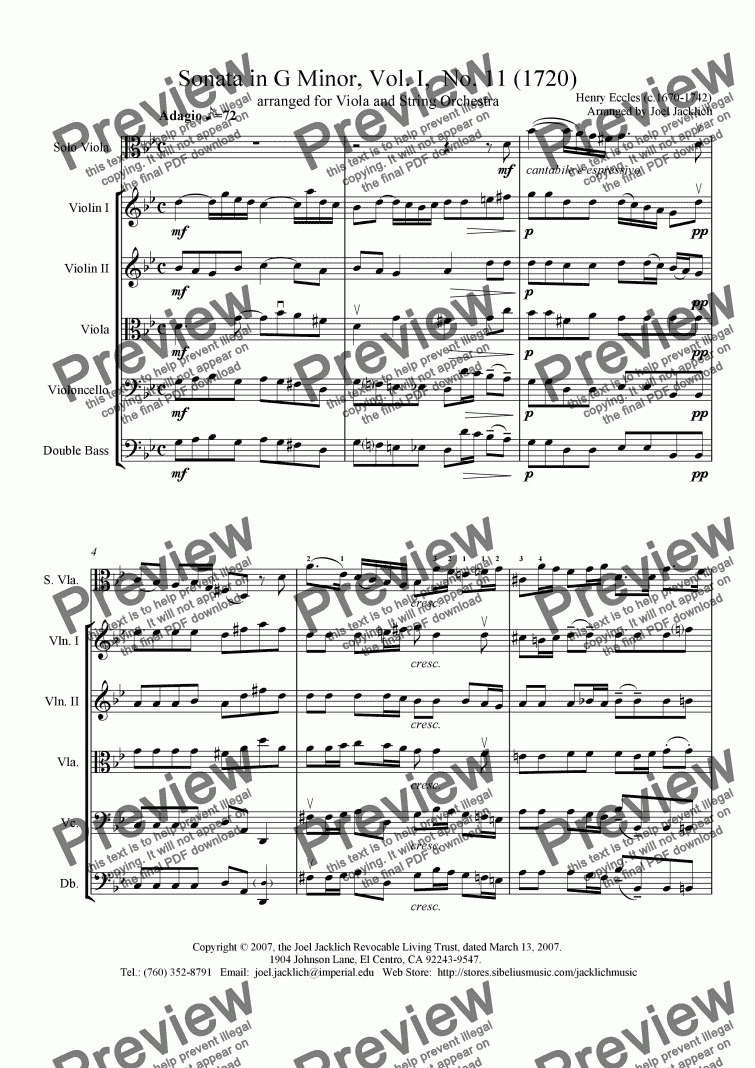 Sonata in G minor, Vol. I, No. 11, arr. for viola and string orchestra

By: Henry Eccles
For: String orchestra

Henry Eccles: Sonata in G minor, Vol. I, No. 11 (1720) arranged for viola solo and string orchestra by Joel Jacklich

I hope that this orchestration of an old "war horse" will allow many more high school principal violists to be the featured soloists at their high school spring concerts in coming years.

In this orchestration of the adaptaion of the original violin sonata, I have re-structured the sonata as a typical binary baroque sonata (AABB in each of the four movements), adding repeat signs, or writing out the (added) repeats with embellishments or octave transpositions to add some variety in the solo line on the second playback of the original (and adapted) material. Writing of the "original" material, there are numerous versions that also vary considerably in melodic and harmonic content: Salmon/Crowell, Paul Klengel, Paul Doctor, Milton Katims, etc. This version takes a number of melodic, harmonic, and structural liberties and is certainly not any type of "authoritative" version, but merely a challenging piece that will allow the violist to be featured as a soloist with string orchestra, rather than in typical recital format with piano where this piece is usually heard. The two bar intro is based on the freely-arranged version by Paul Klengel (1854-1935).

English composer Henry Eccles is from a family of musicians that lived in that second "golden age" of English composition just before, during, and after the greatest of native English composer–Henry Purcell (the first "golden age", of course, being the Renaissance with the likes of Byrd, Taverner, et al.) Henry's older brother John (sometimes referred to as John Eagles) was a well-known composer of music for the theater sometimes collaborating with Jeremiah Clarke. Another brother, Thomas, although a talented violinist, was a drunkard and was reduced to playing in inns and taverns. (cf., Joel Quarrington)

There is some discrepancy as to Henry's date of birth, and one will find it listed as 1670, 71, or 72; and there may have been another Henry Eccles (possible his cousin) further adding to the confusion. Henry was employed as a violinist in the "Royal Band" of Queen Anne. After her death, he eventually moved to Paris, where he was employed by Louis XIV. There, in 1720, he published his <em>Primier Livre de Sonates a Violon Seul e la Basse</em>. Whether this best-known eleventh sonata is actually by Eccles or not remains a mystery, as the volume in which it is included contains four outright acts of plagiarism of works by Giuseppe Valentini, a pupil of Arcangelo Corelli. Eccles' sonatas number 1, 4, 8, and 9 in the set "are taken almost note-for-note from Valentini's <em>Allettamenti per Camera</em>, Op. 8" (<em>Thresholds</em>, Mark Morton) casting serious doubt as to the authorship of all of Henry Eccles' works.

Reviews of Sonata in G minor, Vol. I, No. 11, arr. for viola and string orchestra