By: Adam Bass
For: Solo instrument (Flute)
This music is in your basket
View basket
Loading... 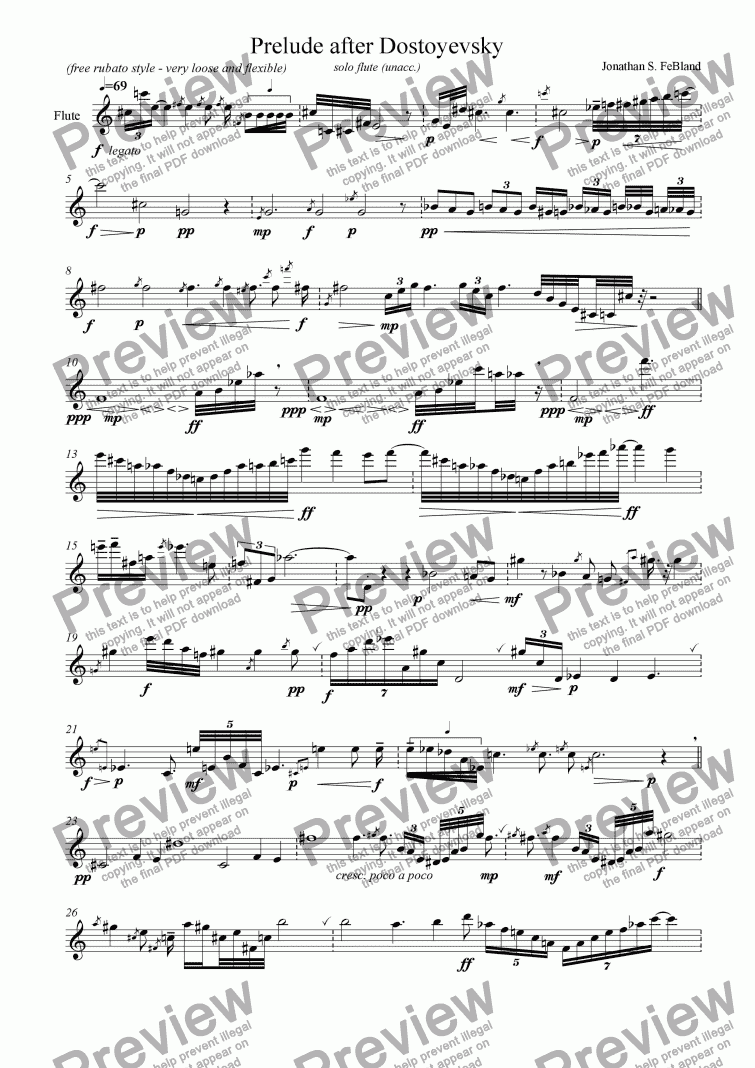 Composer
Adam Bass
Year of composition
1981
Publisher
Golden Goose
Difficulty
Difficult (Grades 7+)
Duration
7 minutes
Genre
Modern classical music
License details
For anything not permitted by the above licence then you should contact the publisher first to obtain permission.

Originally composed in 1981 and handed to a few flute players as photocopies of the original hand-written MS, I now feel confident enough with Sibelius software to attempt to notate it and allow contemporary players to try their hand at the score.

When I was first offered a place at the Royal Academy of Music (in 1978) I only really wanted to compose avant garde or contemporary serious music. I have since moved away from that genre into more approachable genres such as light/educational music and jazz; but this is certainly a true representation of the style in which I first wanted to make my mark.

There now follows a programme note to flautists written on 18th February, 2008.

This piece was inspired by the writing of the brilliant Russian Novelist, Dostoyevsky. It isn�t programmatic as such nor (particularly) �Russian�, but it was written at a time that I was discovering Dostoyevsky and therefore I felt that there was some influence from the Great Writer.

It is a piece �about� phrases. The soloist should not be over-concerned with the minutiae of rhythm/tempo or dynamics (even though these are notated in minute detail). It is a composition that contains some of the most beautiful individual phrases that I have ever composed � so, think �phrases�, think �beauty of tone� and you will do a lot better than worrying about doubly (or triply) dotted notes, septuplets, accelerandi and apostrophe breath-marks as opposed to demisemiquaver rests.

The piece is to be played �in the rubato style� i.e. with a certain flexibility of rhythmic interpretation. There is a direction at the very beginning of the piece which I hope will be taken to heart � �free rubato style, very loose and flexible� � this almost suggests that the work is in the jazz vein which is absolutely not the case (although I have composed quite a bit of jazz, but that�s another story�).

This is a serious work. More importantly however, it is a work thoroughly conceived as an unaccompanied flute solo. It is impossible that the composition could ever be played by any other instrument!

Trance, Midsummernight Solo and 5 Entertainments for Flute and Piano (No.1)

Reviews of Prelude after Dostoyevsky

Sorry, there's no reviews of this score yet. Please .
In order to submit this score to ScoreExchange.com Adam Bass has declared that they own the copyright to this work in its entirety or that they have been granted permission from the copyright holder to use their work. If you believe that this score should be not available here because it infringes your or someone elses copyright, please report this score using the copyright abuse form.