Sign in / Register
HomeInstrumentationsChoirAnthems For All Occasions - I Waited For The Lord - from the 'Hymn of Praise' - Mendelssohn, F. - arr. for Parish Choir & String Quartet by Gerald Manning

Anthems For All Occasions - I Waited For The Lord - from the 'Hymn of Praise' - Mendelssohn, F. - arr. for Parish Choir & String Quartet by Gerald Manning

By: Felix Mendelssohn
For: Choir
This music is in your basket
View basket
Loading... 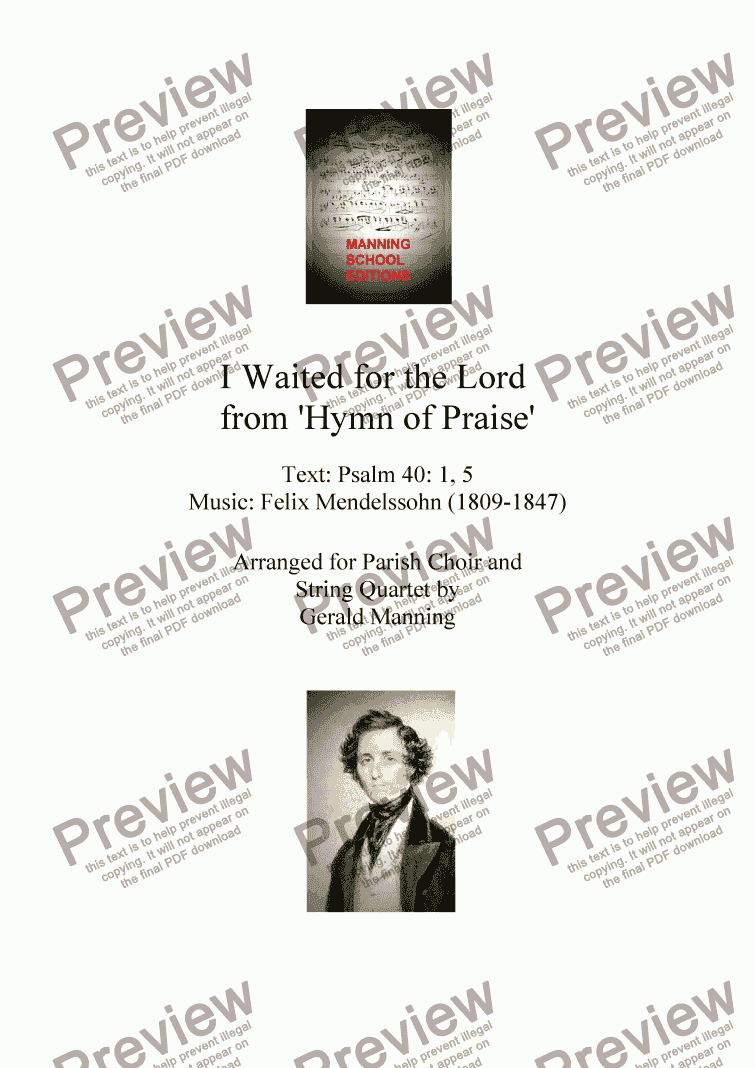 Anthems For All Occasions - I Waited For The Lord - from the 'Hymn of Praise' - Mendelssohn, F. - arr. for Parish Choir & String Quartet by Gerald Manning

By: Felix Mendelssohn
For: Choir

Felix Mendelssohn was the second child and elder son of Abraham Mendelssohn, a keen businessman and successful banker, and his wife Leah Salomon, and the grandson of Moses Mendelssohn an eminent philosopher. Moses took the surname of Mendelssohn (son of Mendel) in accordance with a common Jewish custom. His most important work, Phaedon, or the Immortality of the Soul, was translated into all the languages of Europe, and his noble character made him known and loved throughout Europe as the �German Socrates�. His second son Abraham married the daughter of a Berlin banker, Leah Salomon in 1804, and Mendelssohn�s father had added the name �Bartholdy�, often seen on many of Mendelssohn�s scores, when he and his family abandoned the Jewish faith and were baptized as Christians. Mendelssohn�s mother Leah was a remarkable woman and was greatly accomplished. She played the piano and sang well; she had exquisite skill in drawing and water-colours; she read and spoke German, French, English and Italian, and knew enough Greek to read Homer in the original. She gave Felix his first Piano lessons, and then put him under the very best of masters in Piano, Violin, and composition. Amongst Mendelssohn�s very numerous compositions are 2 Oratorios (St. Paul and Elijah) and other Sacred Choral Works, 4 Symphonies, 2 Piano Concertos and a Violin Concerto, 6 beautiful Concert Overtures, a great deal of Chamber Music, much Piano Music, 6 Organ Sonatas and a little more Organ Music, and many Songs and Part songs. After his Oratorios, by far the most popular of Mendelssohn�s choral works is the Anthem �Hear My Prayer� which incorporates the �Hymn for Soprano, Chorus and Organ� - �O For The Wings of a Dove� which was composed in 1844. Mendelssohn described the Hymn of Praise as a �symphonic cantata�, possibly to avoid comparisons with Beethoven�s choral �Ode to Joy in� the Ninth Symphony. The original �Hymn of Praise� is set for two sopranos and a tenor as soloists, with four-part chorus and orchestra.

Reviews of Anthems For All Occasions - I Waited For The Lord - from the 'Hymn of Praise' - Mendelssohn, F. - arr. for Parish Choir & String Quartet by Gerald Manning