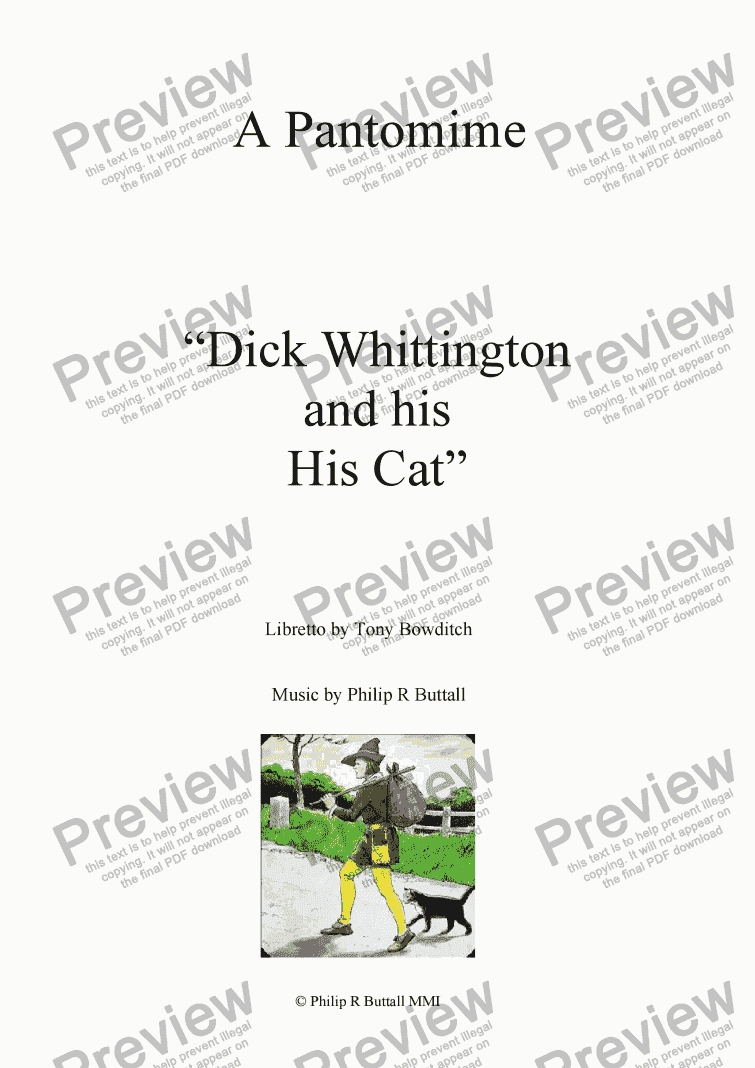 Composer
Philip R Buttall
Year of composition
1975
Lyricist
Tony Bowditch
Publisher
PRB Music
Difficulty
Moderate (Grades 4-6)
Duration
42 minutes
Genre
Other
License details
For anything not permitted by the above licence then you should contact the publisher first to obtain permission.

This is the complete Vocal Score from the Pantomime, Dick Whittington and his Cat which was first performed at Torpoint School, Cornwall in 1975, and subsequently broadcast on Plymouth Sound Radio. Tony Bowditch, who wrote the lyrics, was also a teacher at the school.
The 17 numbers are available separately below, or complete in one file. A full libretto is available as a PDF (file size 395 KB) direct from the composer, for the nominal charge of $6, (or equivalent currency). Full performing rights are freely given to anyone who has acquired both the musical score, and the book / libretto. Advice on performance and staging is freely on hand, and the libretto may easily be adapted to suit any current location, situation or company.

The original cast comprised pupils at the school (11-16 Mixed Comprehensive), with staff taking the parts only of Dame Cicely Suett, the Sultan and Alderman Haddock.

MP3 files are available for the ten pieces which were used in the Plymouth Sound broadcast, and these accompany the ten relevant separate numbers. Carmella Mackenzie provides the narration, which precedes each track. The chorus consists of a small number of students who were able to fit into the studio, and the accompaniment is provided by myself on the piano, science teacher Chris McPhillips on double bass, and biology specialist, Julie Perkins on drums. Julie, in fact, had never played drums before, but had learnt to play them for this pantomime, and does an excellent job! The broadcast took place on December 28, 1975, and an original reel-to-reel recording was taken at the time. The Sultan is played by woodwork teacher, John Hough, with all other solos from the students themselves.
This is, of course, conceived as an example of a typically British confection - namely, a pantomime - and was written almost 30 years ago, in the prevailing style of the time, and before some of today’s listeners were probably ’knee high to a grasshopper’, or wallaby, for that matter! To consider it a musical is rather to miss the plot! Boo!

Reviews of Dick Whittington and his Cat (Vocal Score)