By: Johann Sebastion Bach
For: String quartet
This music is in your basket
View basket
Loading... 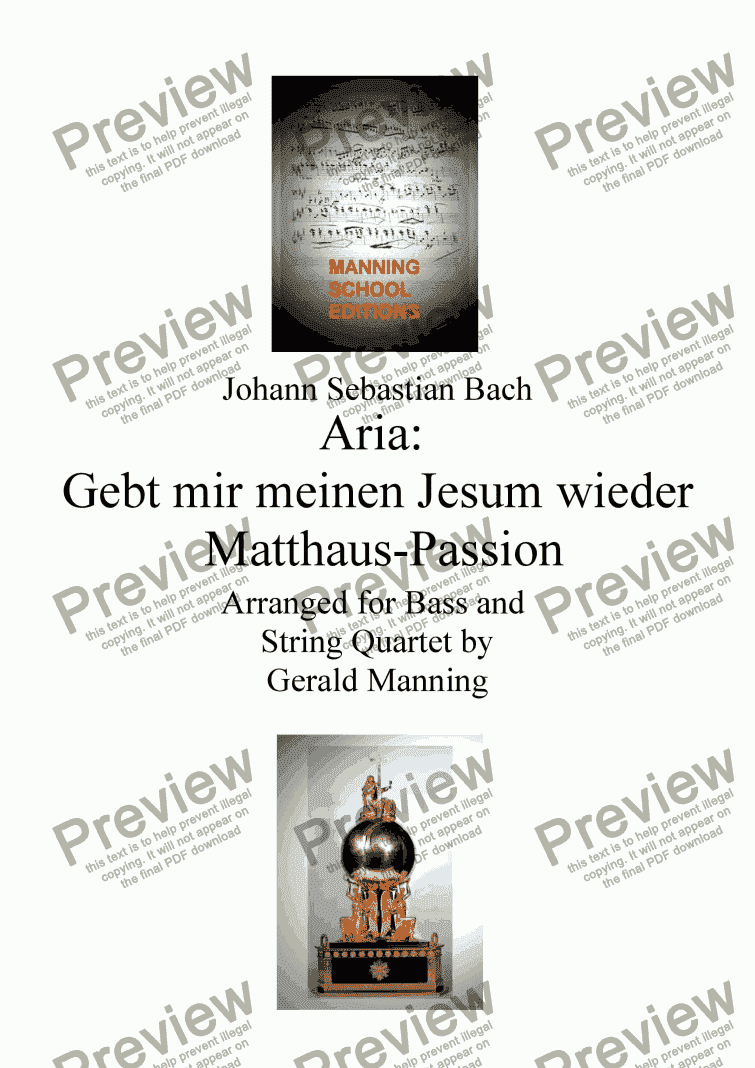 Aria: Gebt mir meinen Jesum wieder Give, O give me back my Lord

The final recitative and double chorus portraying the scene and emotions of those left reflecting at the sepulchre provide, arguably the most dramatic choral music ever composed. Bach�s setting of the Passion narrative from St Matthew�s Gospel is one of the landmarks of the entire choral repertoire. The St. Matthew Passion was probably first performed on Good Friday (11 April) 1727 in the Thomaskirche in Leipzig, where Bach was the Kapellmeister. He revised it by 1736, performing it again on March 30, 1736, this time including two organs in the instrumentation. Bach stands alone in this field. His two extant compositions in this form, those �according to Saint Matthew� and �according to St. John,� remain gigantic landmarks to this day. They combine the Oratorio Passion and the Passion Oratorio: the Bible text and the Chorale, and the lyrical aria and the dramatic chorus. Bach, in fact, employs every instrument that is consistent with the spirit of the Passion; and his Passions are great dramatic works, charged throughout with a deep religious sentiment.

In 1879 the English composer Ethel Smyth attended a performance of the St Matthew Passion, given in Bach's own church, St Thomas's, Leipzig. She later recalled the impression it made on her: �I despair of giving an idea of the devoutness of the audience … It was not only that the church seemed flooded with the living presence of Bach, but you felt as if the Passion itself, in that heart-rending, consoling portrayal, was being lived through as at no other moment of their lives by every soul in the vast congregation.�

Anthems For All Occasions - God Be In My Head, A setting of the Lord’s Prayer (Pater Noster) for Parish Choir & Organ by Gerald Manning and Baroque Suite - 6.Johann Sebastian Bach Gigue: Ouverture in D BWV 1068 - arr. for string quartet