By: Vittorio Monti
For: Solo Trombone + piano
This music is in your basket
View basket
Loading... 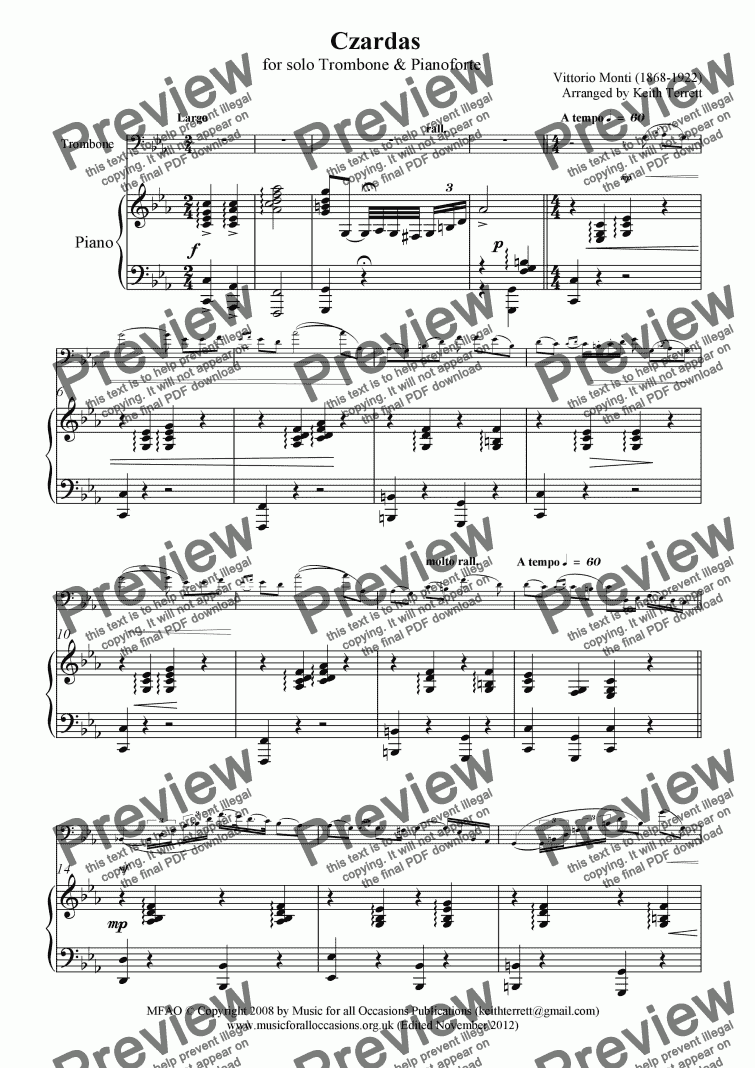 Composer
Vittorio Monti
Year of composition
1904
Arranger
Keith Terrett
Publisher
Music for all Occasions
Difficulty
Difficult (Grades 7+)
Duration
4 minutes
Genre
Classical music
License details
For anything not permitted by the above licence then you should contact the publisher first to obtain permission.

Czardas for Trombone and Piano, with just a hint of the Rumba!

The MP3 recording of Czardas is my concert band arrangement performed by Stadtmusik Biel with Stephan Gräub on Euphonium.

Czardas arranged for Doublebass and Piano.

Its origins can be traced back to the 18th century Hungarian verbunkos, used as a recruiting dance by the Hungarian army.

Csardas is characterized by a variation in tempo: it starts out slowly’ and ends in a very fast tempo (friss, literally "fresh"). There are other tempo variations, such as the ritka csardas. The music is in 2/4 or 4/4 time. The dancers are both male and female, with the women dressed in traditional wide skirts, usually colored red, which form a distinctive shape when they whirl.

Classical composers who have used csardas themes in their works include Franz Liszt, Johannes Brahms, Johann Strauss, Pablo de Sarasate, Pyotr Ilyich Tchaikovsky and others. Probably the best-known csardas is the eponymous composition by Vittorio Monti written for violin and piano. This virtuosic piece has 5 tempo variations.