By: Vittorio Monti
For: Solo Trumpet in Bb + piano
This music is in your basket
View basket
Loading... 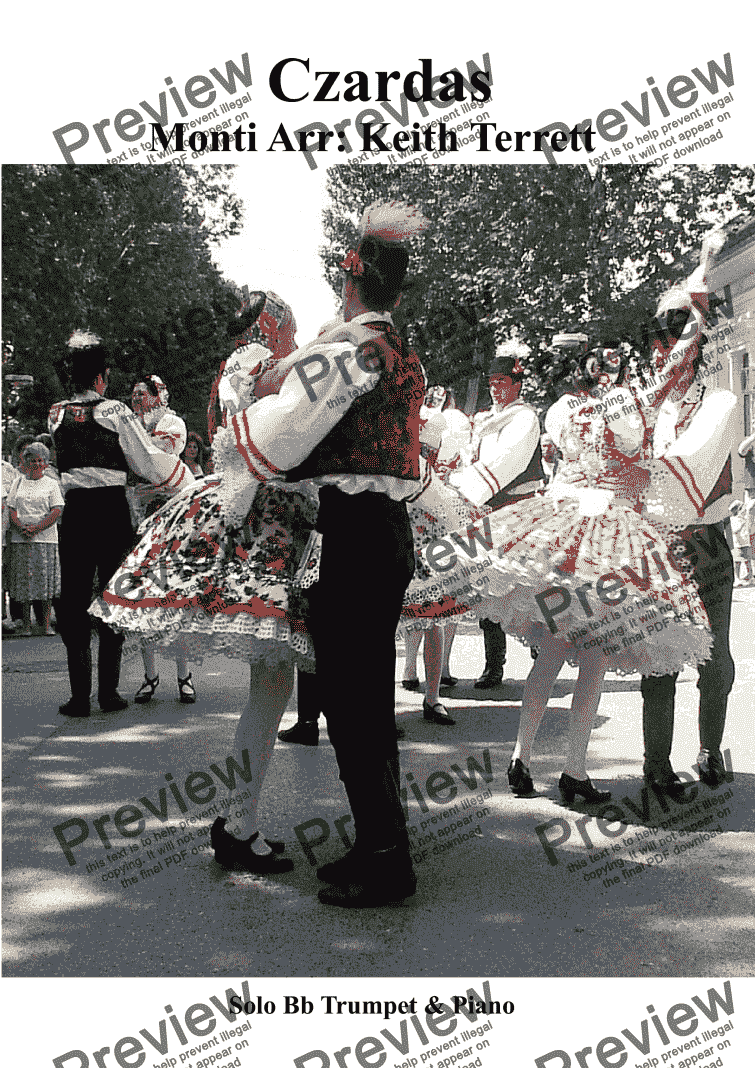 By: Vittorio Monti
For: Solo Trumpet in Bb + piano

Composer
Vittorio Monti
Year of composition
1904
Arranger
Keith Terrett
Year of arrangement
2011
Publisher
Music for all Occasions
Difficulty
Moderate (Grades 4-6)
Duration
4 minutes
Genre
World music
License details
For anything not permitted by the above licence then you should contact the publisher first to obtain permission.

Czardas for Trumpet & Piano, in a lower tessitura, to suit younger and less ex-perienced players.

The piece has seven different sections, usually of a different tempo and occasionally key. The first half of the piece is in D minor, then modulates to D major, back to D minor, and then finally finishes in D major. The first section is Andante – Largo, followed by a much faster Allegro vivo. This then slows down to Molto meno. The piece then slows down more to Meno, quasi lento. The piece then suddenly picks up in pace and is at Allegro vivace. It then slows down to Allegretto and finally to Molto più vivo. The tempo changes make the piece exciting and interesting, but even with all of these tempo changes, it is generally expected that there should be some rubato to add feeling to the piece. There are also many different dynamic changes in the piece, ranging from pianissimo to fortissimo.

In the Meno, quasi lento section, the violin plays artificial harmonics. This involves the violinist placing their finger down on the note and playing another note, with the finger only just touching the string 5 semitones above. This gives the effect of the violin sounding two octaves (24 semitones) higher.

The British Film Institute database lists a 1927 short film made in the DeForest Phonofilm sound-on-film process by the Samehtini Trio, featuring this work played by a pianist and cellist. Sylvia Fine used the Allegro vivo section from this composition as the closing theme for her comic composition The Little Fiddle (Symphony for Unstrung Tongue), as performed by her husband, Danny Kaye, first in the movie The Secret Life of Walter Mitty, and afterward as a release on Decca Records. The theme is also prominently featured in the 1951 Bollywood movie Awaara. Grace Jones adapted a portion of the melody as an intro for her version of "Autumn Leaves" on her 1978 album Fame. Victor Borge performed Csardas in both a hilarious and technically superb way with violinist Anton Kontra [da]. It was a featured piece involving dueling violins in the 1984 film Unfaithfully Yours. The composition's third section (measures 22 through 53) was adapted for use as a preinstalled ringtone, designated "Ringtone 8", in certain models of entry-level mobile telephones manufactured by LG and co-branded under the Verizon carrier, including the LG VX8350. The adaptation of the section's first half (mm. 22–37) is relatively free, but that of its second half (mm. 38–53) closely follows the original melody. Lady Gaga used part of Csárdás as an intro for her song "Alejandro" from her 2009 album The Fame Monster. Louis C.K. used this piece as part of the introduction to episode 6 "Subway/Pamela" from season 2 of his show Louie. In one of the first scenes of the first episode of the third season of the British TV Series Peaky Blinders, first aired on May 5th, 2016, people dancing on the melody of Csárdás (the melody itself is played at the same moment) can be viewed for some seconds. It is worth mentioning that the people dancing were considered, in the series, of Gypsy descent, just as the song has been played, since its composition, by most Gypsy orchestras. Piano Tiles 2, an iOS/Android rhythm app created by Cheetah Mobile, uses this piece. In the post-wedding scene of the last episode of the second season of the television show Transparent, the violinist among the musicians performing "Hava Nagilah" intersperses quotations from the piece's fast motif occurring in sections including the last one. Used in an Optus television commercial in Australia in 2018. It is used during one of the ten Plagues of Egypt in Nina Paley's film Seder-Masochism (2018).

Just love this arrangement by Keith, listen to the Latin rhythms he includes in the faster sections!

There are so many versions in his store, for all instruments.