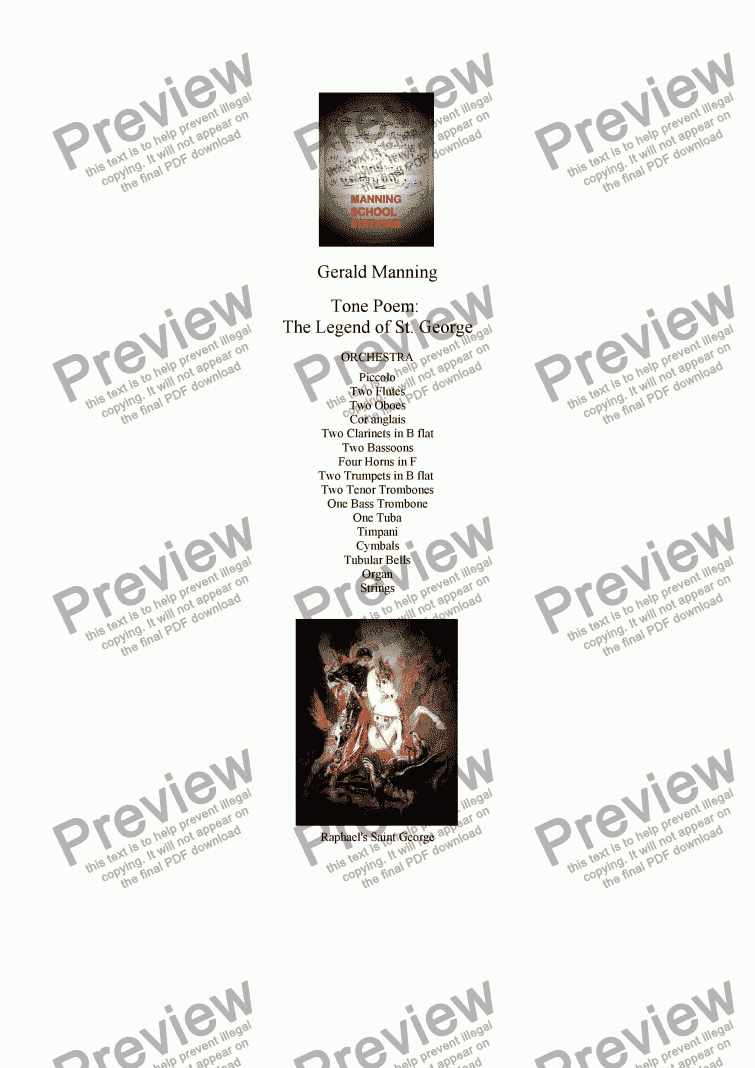 Composer
Gerald Manning
Year of composition
2008
Lyricist
Anonymous
Publisher
MANNING SCHOOL
Difficulty
Difficult (Grades 7+)
Duration
18 minutes
Genre
Classical music
License details
For anything not permitted by the above licence then you should contact the publisher first to obtain permission.

Very little is known with any degree of certainty about the life of England�s patron saint, a fourth century Christian martyr, who also happened to be the patron saint of Georgia and the city of Moscow among others. One of the earliest accounts by Eusebius of Caesarea c. 322 AD, describes him as a soldier of noble birth who held the rank of tribune in the Roman army, and was beheaded by Diocletian at Nicomedia on 23 April, 303, for protesting against the Emperor�s persecution of Christians. Throughout Christendom he became venerated for his bravery in defence of the poor and the defenceless and for his Christian faith. Edmund Spencer in Book 1 of the Faerie Queene (1590-1596), one of the greatest poems in the English language, depicts him as the Redcrosse (sic) Knight of Holiness, protector of the Virgin.

�But on his breast a bloody Cross he bore The dear remembrance of his dying Lord, For whose sweet sake that glorious badge we wore And dead (as living) ever he adored.�

Many miracles were attributed to him and George was universally recognized as a saint after 900AD, and his fame was greatly enhanced by the publication of Legenda Sanctorum (Readings of the Saints), which later became known as the Legenda Aurea (The Golden Legend) by James of Voragine in 1265, which popularised the legend of George and the Dragon, which took on a new lease of life during the Counter Reformation. It is also worth noting that John Bunyan (1628-88) recalled the legend of George and the Dragon in the account of the fight between Christian and Apollyon in Pilgrim�s Progress (1679-1684).

Venerated by followers of particular occupations St. George is the patron saint of archers, which highlights and gives special point to these famous lines from Shakespeare�s Henry V, Act3, Scene1, l. 31:

�I see you stand like greyhounds in the slips, Straining upon the start. The game�s afoot: Follow your spirit; and, upon this charge Cry God for Harry, England and St. George!�

Venerated throughout Christendom as an example of bravery in defence of the poor and the defenceless, the chivalrous St. George, a fine horseman rides in search of the infamous and evil dragon that breathes fire, and has a scaly reptilian body with wings, claws and a long tail. The way is long and treacherous and passes through the field of lions and the valley of darkness. Armed with his long spear and emblazoned �on his breast a bloody Cross he bore the dear remembrance of his dying Lord,� he is fearless. The night is black and cheerless as he approaches the dragon�s den. The beast is asleep but with his eyes open, and through the darkness George can see the red oval sockets with bright green pupils glowing in the darkness. Suddenly the creature awakens and catching sight of the brave saint, roars at him in raucous tones �Prepare thyself to die; for I swear by my infernal den, that thou shalt go no farther: here I shall spill thy soul.� A terrifying and dreadful fight ensues. George wealds his spear with consummate skill and finally pierces the heart of the dragon.

George makes the return journey to Lydda from whence he came, again passing through the field of lions and the valley of darkness, where, as he approaches the city news of the slaying of the dragon has reached the populace, who are giving thanks to God by singing the troparion Hymn of St. George:

�Liberator of captives, and defender of the poor, physician of the sick, and champion of kings, o trophy-bearer, and Martyr George, intercede with Christ our God that our souls be saved�.

The venerated saint is then praised for his victory over the evil dragon.