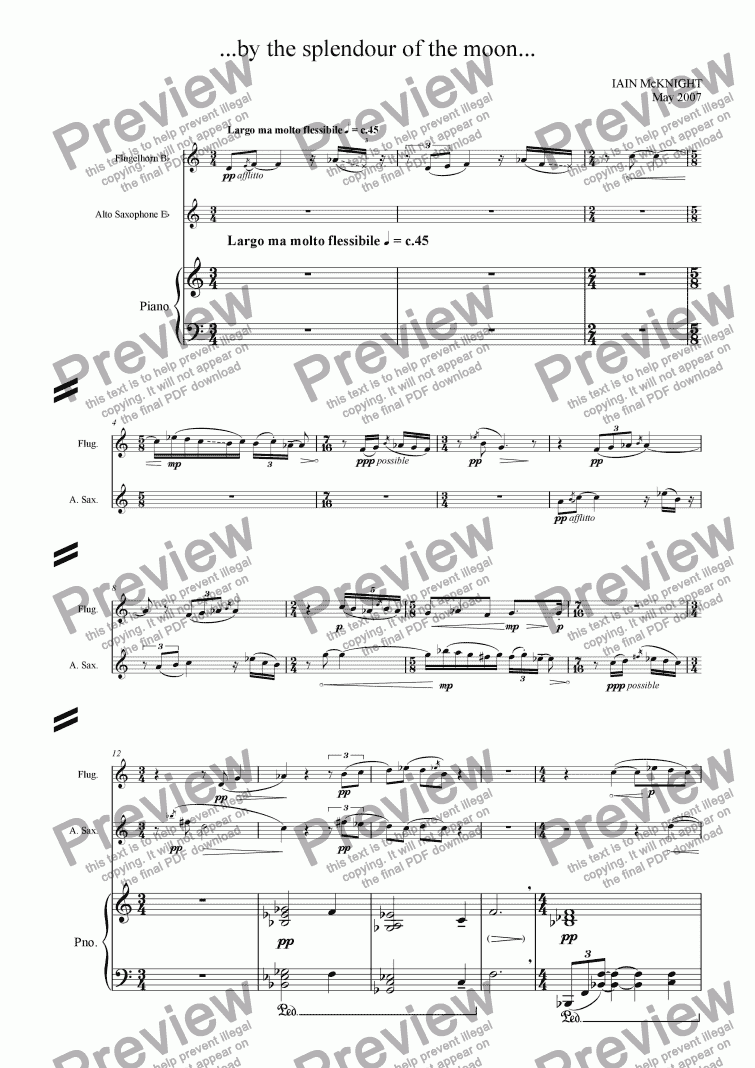 …by the splendour of the moon… was composed at the request of my friend, flugel and cornetist Gareth Lancaster for his final Masters recital in the winter of 2007, and is dedicated to the memory of fellow musician Vicki Porter, who was tragically killed in a road accident in June 2001. The piece takes its name from an emotive poem, �Defeated by Love�, by the thirteenth century Persian poet and philosopher R&#363;m&#299;, and draws influence from the idea of the moon�s light, and its power, which R&#363;m&#299; cites in his poem as a bond between this world and the next. I have tried to illustrate the idea of moonlight in the overall structure of the piece, which is in a �mirror form�; the second half is a reflection of the first, though, like the reflection of the moon in water, is somewhat distorted. The music is for the most part atonal, the main exception being at the very centre of the piece, where there is a quote from Debussy�s Clair de Lune which literally signifies �the light of the moon�. My intention is to allow a degree of flexibility to the performers, and therefore the music permits a great deal of freedom in its execution, though care should be taken where the duet lines are in accord with each other. For the most part standard notation is used, though in the opening and closing statements in the Flugel, I have used crosshead notes to indicate notes which should played without the valve fully depressed (though slightly more than �half valve�, to give an indication of pitch) and also dashed lines between notes, representing a slow valve change, quasi glissando. I hope these effects are a positive addition the musical style of the piece.

Reviews of ...by the splendour of the moon...