By: Malcolm Dedman
For: Solo instrument (Piano)
This music is in your basket
View basket
Loading... 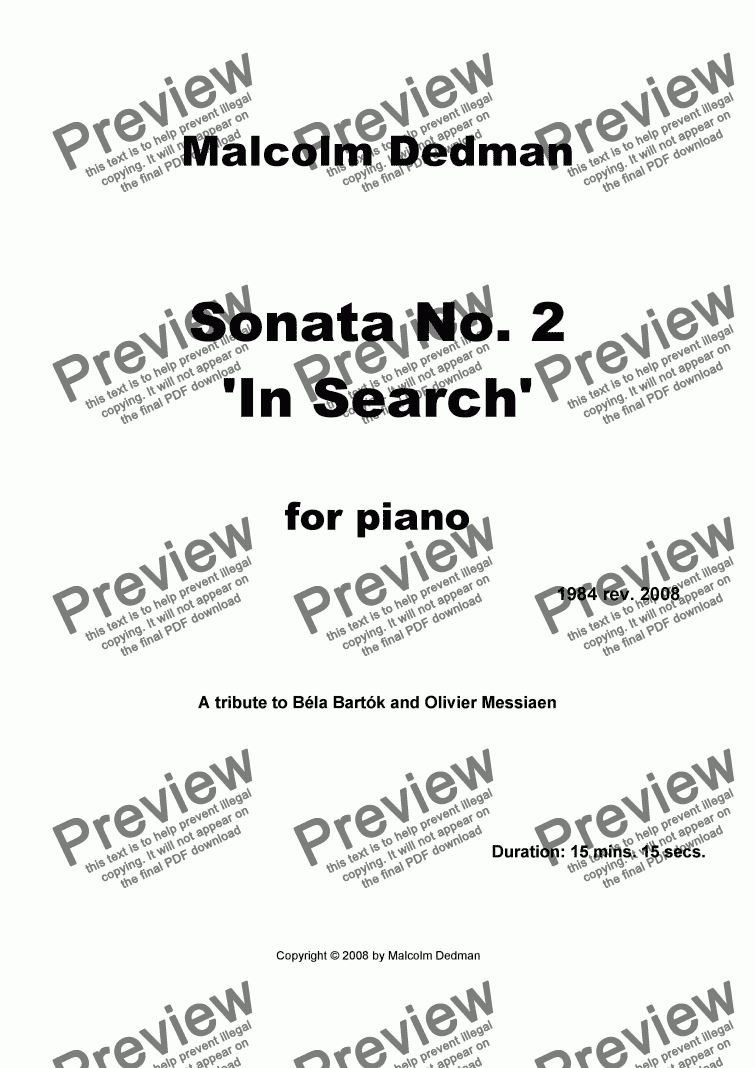 By: Malcolm Dedman
For: Solo instrument (Piano)
(+ VAT when applicable)
Note: The publisher requires a minimum purchase of 1 licenses
This music is in your basket
View basket

Composer
Malcolm Dedman
Year of composition
1984
Publisher
Misty Mountain Music
Difficulty
Difficult (Grades 7+)
Duration
15 minutes
Genre
Modern classical music
License details
For anything not permitted by the above licence then you should contact the publisher first to obtain permission.

This sonata was written in 1984 and is a tribute to both Béla Bartók and Olivier Messiaen, who are considered iconic figures by the composer. The subtitle refers to a search for a spiritual fulfilment, which was later realised when the composer embraced the Bahá’í Faith.

References are made to aspects of the music of both Bartók and Messiaen, and the work opens with another reference to the music of Scriabin, in particular his Sonata number 5.

Although the sonata is cast in a conventional three movement form, none of the movements employ a strict sonata form structure. However, the first is close to sonata form, but has three main subjects, followed by a development section before closing with a brief recapitulation of the first subject. It is an expression of anger of the violence and troubles in the world.

The second movement is in ’arch’ form (favoured by Bartók) i.e. ABCBA. It is generally very lethargic in mood, but expresses a determination to search for answers.

The final movement is a development of two main strands, one melodic and the other harmonic. It gradually enfolds from a quiet statement of the main thematic idea to an expression of joy at having found some answers.