By: Palestrina
For: Brass quartet
This music is in your basket
View basket
Loading... 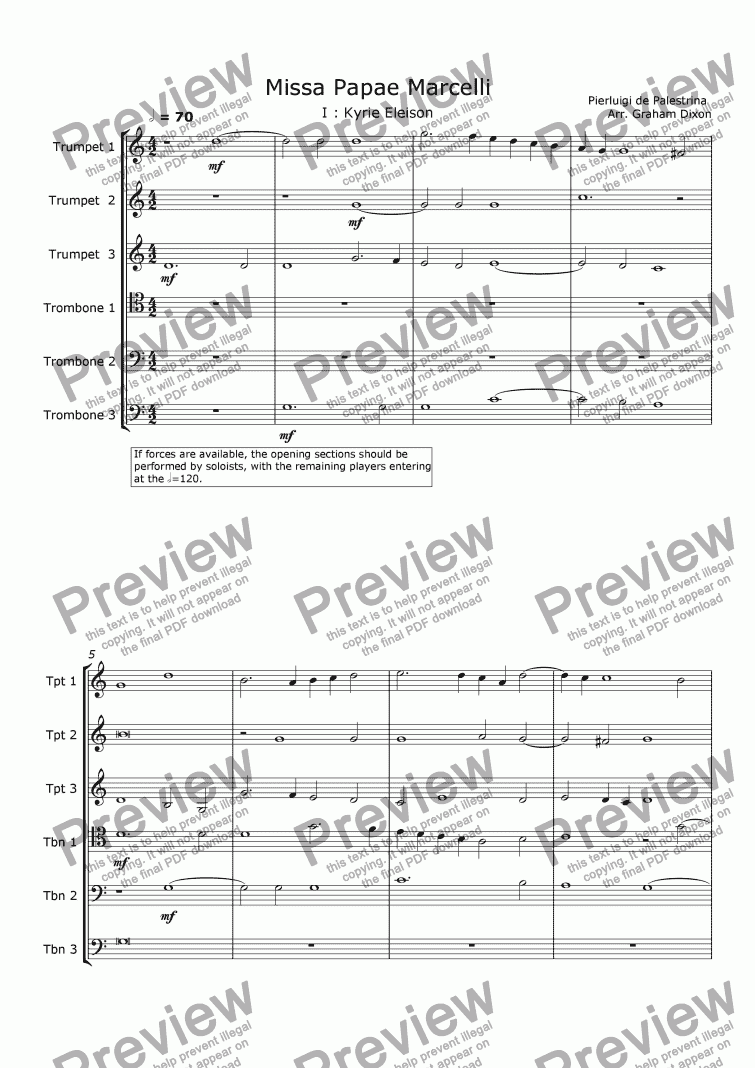 By: Palestrina
For: Brass quartet

Composer
Palestrina
Arranger
Graham Dixon
Lyricist
none
Difficulty
Difficult (Grades 7+)
Duration
25 minutes
Genre
Classical music
License details
For anything not permitted by the above licence then you should contact the publisher first to obtain permission.

The complete Missa Papae Marcelli (1562) by Palestrina has been transcribed for brass sextet, consisting of three trumpets and three trombones. Alternative instrumentations are possible, including horns in the middle voices, and I have included horn parts in the set. I have also included the name of the original vocal part which each instrument represents, to avoid confusion. It is obviously possible to play this transcription with other combinations, including strings and winds. Please contact me if you would prefer alternate instrumentation.

Performance practice seems to lean in the direction of using soloists for certain sections of the mass. These are indicated, and there is a note at the opening which makes suggestions as to the use of soloists until the return of the 'Kyrie'.

I have given some thought to the possibilities of spacilization in this work, but have no concrete advice to give. Palestrina treats several many sections antiphonally, but the choices of instruments in each 'group' are never consistent, and so I recommend that the players stand together, or uniformly separated, rather than in two or more 'cori spezzati' groups.

There were a number of editorial choices to make when compiling this transcription. I have included tempo markings merely as a guide, and based these on my favorite recordings. When in doubt over accidentals, I have made reference to the excellent Tallis Scholars recording, the one with which I imagine the majority of listeners are familiar.

The same is true of dynamic markings. I have included them sparingly and in situations where they add to the contrasting nature of neighboring sections. Although I include 'fortissimo' markings for the quickest, most excited sections, I do not intend the sound to become too forceful or overblown. I have not included individual markings for sections which are intended to naturally pop out of the texture, as I prefer to allow Palestrina's polyphonic genius to speak for itself.

Sorry, there's no reviews of this score yet. Please .
In order to submit this score to ScoreExchange.com Graham Dixon has declared that they own the copyright to this work in its entirety or that they have been granted permission from the copyright holder to use their work. If you believe that this score should be not available here because it infringes your or someone elses copyright, please report this score using the copyright abuse form.