By: Johann Pachelbel Arranged by Keith Terrett
For: Quartet of Marimbas [grand staff]
This music is in your basket
View basket
Loading... 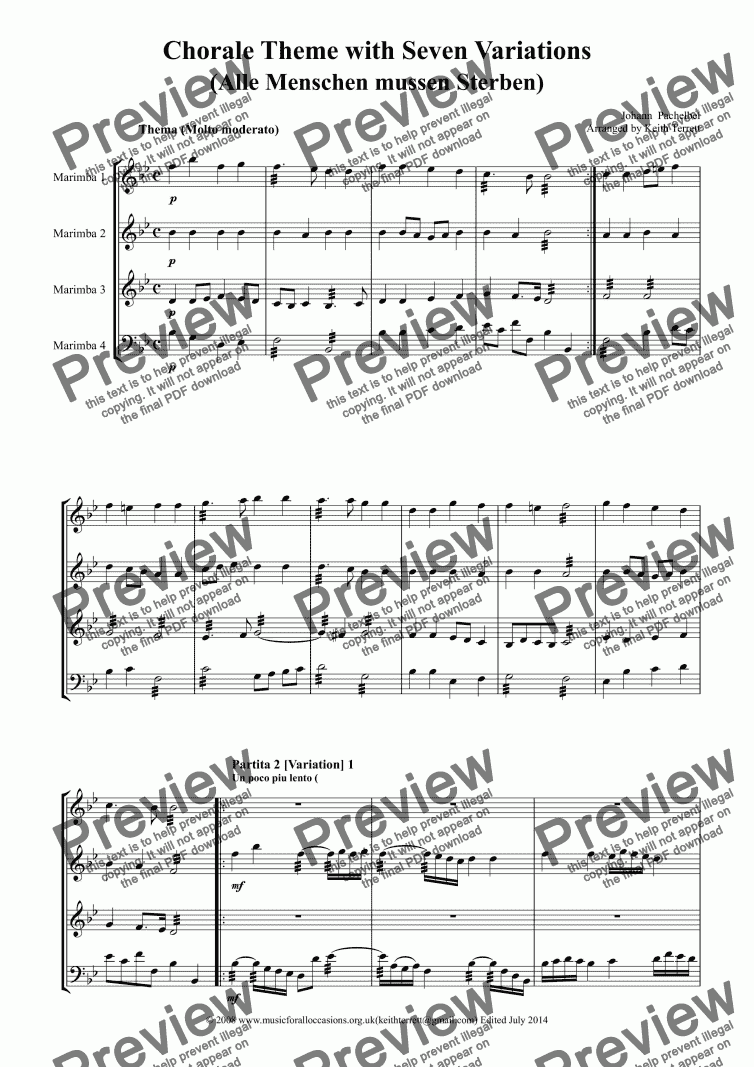 By: Johann Pachelbel Arranged by Keith Terrett
For: Quartet of Marimbas [grand staff]

Composer
Johann Pachelbel Arranged by Keith Terrett
Arranger
Keith Terrett
Publisher
Music for all Occasions
Difficulty
Difficult (Grades 7+)
Duration
6 minutes
Genre
Classical music
License details
For anything not permitted by the above licence then you should contact the publisher first to obtain permission.

An arrangement for four Marimbas, Vibraphonse, Xylophones or mixed mallet ensemble, of Pachelbel’s Chorale and Seven Variations. Chorales constitute almost half of Pachelbel’s surviving organ works, in part because of his Erfurt job duties which required him to compose chorale preludes on a regular basis. The models Pachelbel used most frequently are the three-part cantus firmus setting, the chorale fugue and, most importantly, a model he invented which combined the two types. This latter type begins with a brief chorale fugue that is followed by a three- or four-part cantus firmus setting. Chorale phrases are treated one at a time, in the order in which they occur; frequently, the accompanying voices anticipate the next phrase by using bits of the melody in imitative counterpoint. An example is Wenn mein Stündlein vorhanden ist: