By: J.Pachelbel
For: Quintet of Soprano Recorders
This music is in your basket
View basket
Loading... 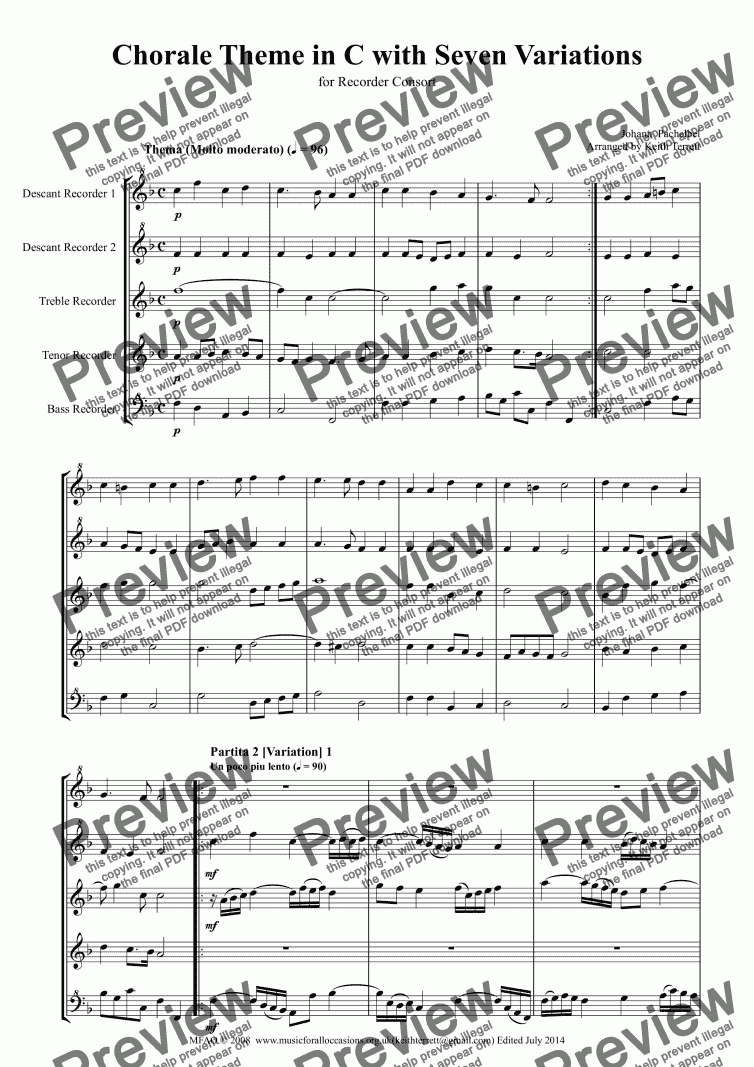 By: J.Pachelbel
For: Quintet of Soprano Recorders

Composer
J.Pachelbel
Arranger
Keith Terrett
Publisher
Music for all Occasions
Difficulty
Difficult (Grades 7+)
Duration
5 minutes
Genre
Classical music
License details
For anything not permitted by the above licence then you should contact the publisher first to obtain permission.

Pachelbel's grand Chorale Partita with Seven Variations in C is based on the 17th Century Protestant German hymn tune "Alle Menschen müssen sterben" (All of Mankind is Mortal) by Jakob Hintze.

The original form of the work was in C major with eight variations, composed for Organ.

Bach, being greatly influenced by Pachelbel, later took up the melody for use in one of his own Cantatas.

Keith Terrett has done a great job arranging these elaborate variations of about 6 minutes in length for a Recorder Consort of advanced performers.

Johann Pachelbel (German pronunciation: [ˈjoːhɑn ˈpaxəlbɛl]; baptised September 1, 1653 – buried March 9, 1706) was a German Baroque composer, organist and teacher, who brought the south German organ tradition to its peak. He composed a large body of sacred and secular music, and his contributions to the development of the chorale prelude and fugue have earned him a place among the most important composers of the middle Baroque era.

Pachelbel’s music enjoyed enormous popularity during his lifetime; he had many pupils and his music became a model for the composers of south and central Germany. Today, Pachelbel is best known for the Canon in D, as well as the Chaconne in F minor, the Toccata in E minor for organ, and the Hexachordum Apollinis, a set of keyboard variations.

Pachelbel’s music was influenced by southern German composers, such as Johann Jakob Froberger and Johann Kaspar Kerll, Italians such as Girolamo Frescobaldi and Alessandro Poglietti, French composers, and the composers of the Nuremberg tradition. He preferred a lucid, uncomplicated contrapuntal style that emphasized melodic and harmonic clarity. His music is less virtuosic and less adventurous harmonically than that of Dieterich Buxtehude, although, like Buxtehude, Pachelbel experimented with different ensembles and instrumental combinations in his chamber music and, most importantly, his vocal music, much of which features exceptionally rich instrumentation. Pachelbel explored many variation forms and associated techniques, which manifest themselves in various diverse pieces, from sacred concertos to harpsichord suites.

Reviews of Chorale Partita with Seven Variations for Recorder Consort