By: Thomas Tallis
For: Brass quintet
This music is in your basket
View basket
Loading... 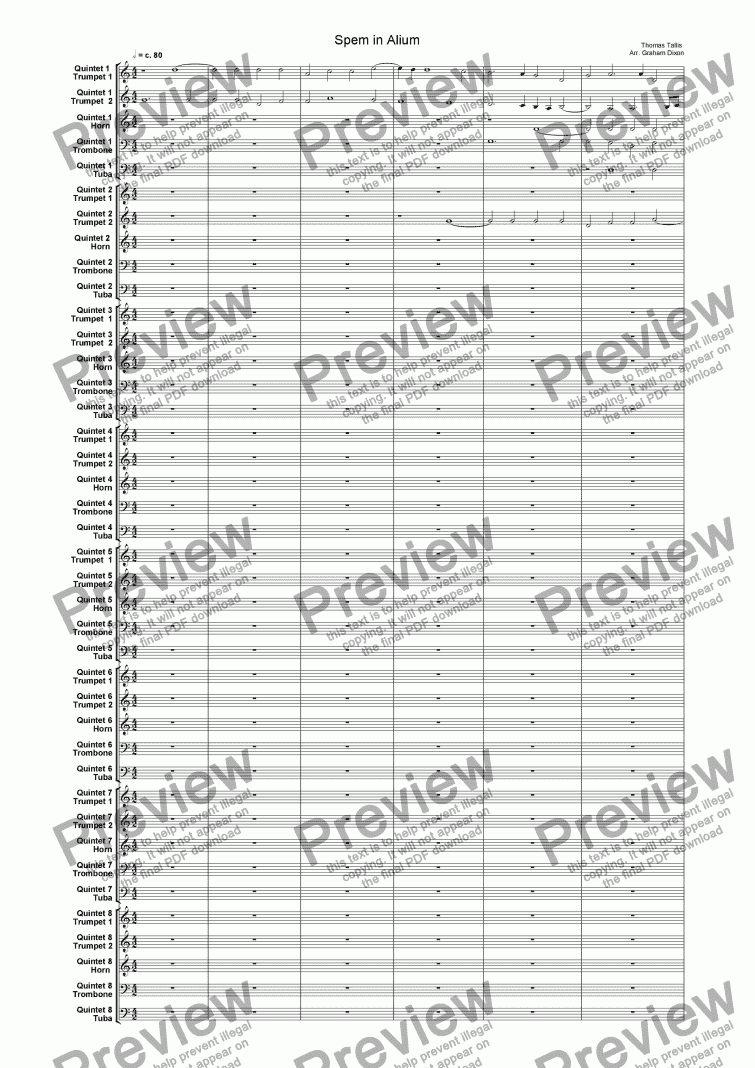 By: Thomas Tallis
For: Brass quintet

Composer
Thomas Tallis
Arranger
Graham Dixon
Year of arrangement
2008
Lyricist
none
Difficulty
Difficult (Grades 7+)
Duration
9 minutes
Genre
Classical music
License details
For anything not permitted by the above licence then you should contact the publisher first to obtain permission.

One of the most popular and impressive works of the 16th Century, Thomas Talli’s 40-part motet ’Spem in Alium’ was written in response to a similarly ambitious motet, ’Ecce Beatem Lucem’ by Italian Allessandro Striggio. The piece is remarkable certainly for its scope, comprising as it does of eight choirs of five voices (soprano, alto, tenor, baritone and bass) with huge potential for spatial arrangement.

In the preface to his own edition of this work, which was my source for this edition, Philip Legge posits that ’Spem in Alium’ might have been intended for the octagonal banquet hall of the Earl of Arundel at Nonsuch Palace. The hall’s construction was based on the cardinal points, and moreover there were four first-floor balconies which would have permitted choirs to stand separated not only horizontally, but also vertically. Tallis’ attitude to ’cori spezzati’ (an antiphonal multiple-choir technique brought to its zenith in Giovanni Gabrieli’s Venice) is flexible and imaginative, as he pairs the choirs in many different groupings. Music would, therefore, move across the centre of the space in a variety of directions, and arrive with the audience in the manner of stereophony.

For this present edition, I have transcribed the music directly for eight brass quintets. The horn parts, based as they are on the range of the tenor, are quite low in the register, and this has necessitated changes of clef in the score which are more frequent than I would like. However, this avoids the inevitable collisions between parts spaced so closely together in this dense texture. I have deleted these clef changes from the parts, which are entirely in treble clef. In addition, where possible, I have hidden the rests of quintets which are not involved on a particular page. If this does not suit your director, please contact me and I will change it.

I have not included tempo markings (save an initial advisory mark, which may be brisker than you are used to - this is mostly as a result of the brass players not being required to articulate words in a busy, polyphonic texture) nor are there dynamic markings. Apart from the unsightly crowding of the score these would produce, I did not want to impose my own views of the dynamic possibilities on the performers. In general, I believe that Tallis uses the enormity of the sound, rather than dynamics for individual choirs, to produce dynamic contrast.

Tallis’ attitude to dissonance permits for semitonal clashes, and there are a number of examples in this piece. Also, as each melodic fragment is passed around the groups, performance practice in the recordings with which I am familiar allows for the bringing out of this line.

Comments and questions are welcome.

Two Fanfares from the 'Christmas Oratorio', Four Preludes and Fugues from the Well-Tempered Clavier (Book One) for Brass Quintet, Overture from the 'Christmas Oratorio' for Ten-piece Brass, Overture from the Easter Oratorio, Oh The Pleasure of the Plains!, Concerto Grosso No. 12 'La Follia' for brass ensemble, A French Baroque Festival for Brass Quintet, Sinfonia from Cantata BWV 29 for Brass Quintet and Organ, Prelude and Fugue in G Major (WTC Book 1), Overture to 'The Magic Flute', Erschallet, Trompeten!, Pictures at an Exhibition for Ten-Part Brass, Ronde and Variations for String Quartet, Trombatorium, Missa Papea Marcelli, Concerto in B-flat Op. 5 No. 1, The Silver Swan (voice and piano), Possible Worlds (for piano solo), Valles Marineris, for Trumpet and Piano, Overture from Cantata BWV 194 for Six Trumpets, The Harmonious Blacksmith for Brass Quintet, Ten Easy Christmas Carols for Brass Quintet, Passacaglia and Fugue in C Minor for Symphonic Brass, Pictures at an Exhibition for Symphonic Brass, Brandenburg Concerto No. 2 for Brass Quintet (1), 'Queen of the Night Aria' for Brass Quintet, Sonata VII for Two Trumpets & Strings, Contrapunctus 1 from The Art of Fugue, Canzona "La Battalia" for Three Brass Quintets, Handel’s Messiah - Six Festive Choruses for Brass Ensemble, Chaconne for Two Violins & Continuo, Toccata from L'Orfeo, Sonada 1652 for eight trumpets, Aria Della Battaglia and Five Ceremonial Fanfares

Sorry, there's no reviews of this score yet. Please .
In order to submit this score to ScoreExchange.com Graham Dixon has declared that they own the copyright to this work in its entirety or that they have been granted permission from the copyright holder to use their work. If you believe that this score should be not available here because it infringes your or someone elses copyright, please report this score using the copyright abuse form.