Sign in / Register
HomeInstrumentationsDuetPrelude No. 7 for flute (T. recorder) and easy guitar

Prelude No. 7 for flute (T. recorder) and easy guitar 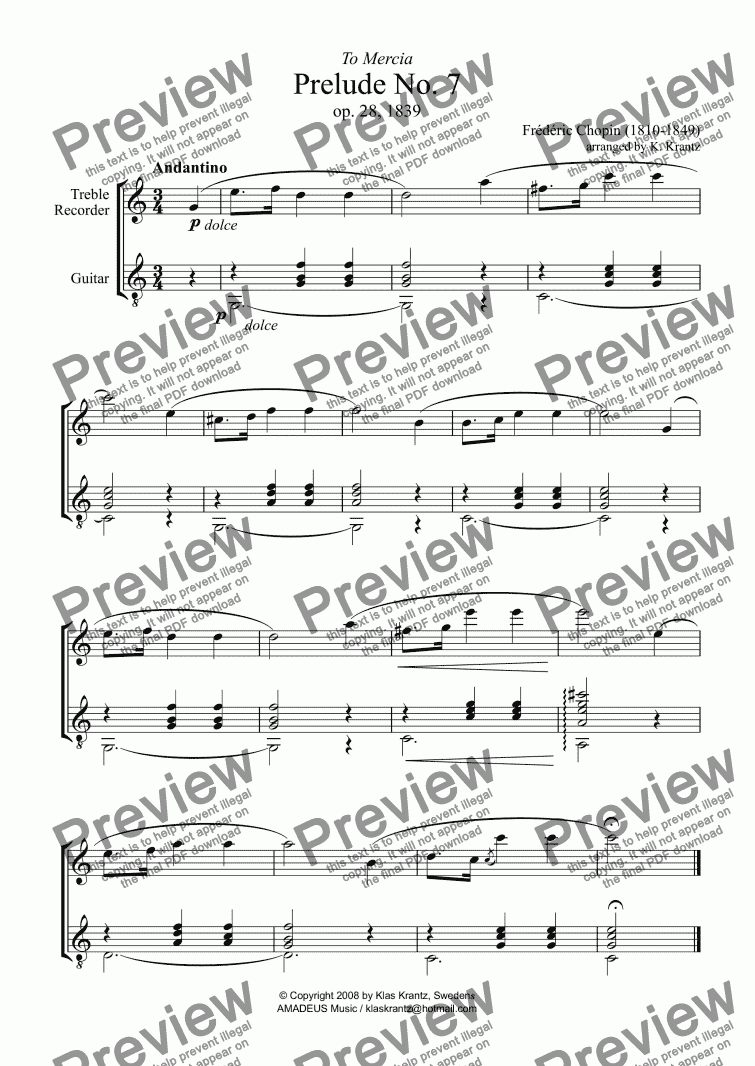 Prelude No. 7 for flute (T. recorder) and easy guitar

Composer
Frédéric Chopin
Year of composition
1839
Arranger
Klas Krantz
Year of arrangement
2008
Publisher
Amadeus Music
Difficulty
Easy (Grades 1-3)
Duration
1 minute
Genre
Classical music
License details
For anything not permitted by the above licence then you should contact the publisher first to obtain permission.

Prelude No. 7 in A major, Andantino. A brief 8-bar melody is twice repeted. Balletomanes will immediately reconise this as the piece used as the prelude to Les Sylphides.

Due to apparent lack of formal structure and brevity, the Preludes caused some consternation among critics at the time of their publication. No prelude is longer than 90 measures (Prelude No. 17) and the shortest a mere 13 measures (Prelude No. 20). Robert Schumann said, "They are sketches, beginnings of etudes, or, so to speak, ruins, individual eagle pinions, all disorder and wild confusions."Franz Liszt’s opinion, however, may have been positive � "Chopin’s Preludes are compositions of an order entirely apart."[3] Since that time, the Preludes have become standard fare for the average pianist. Many major performers have recorded the set, beginning with Alfred Cortot in 1926.

Reviews of Prelude No. 7 for flute (T. recorder) and easy guitar