By: Austin HUANG
For: Orchestra
This music is in your basket
View basket
Loading... 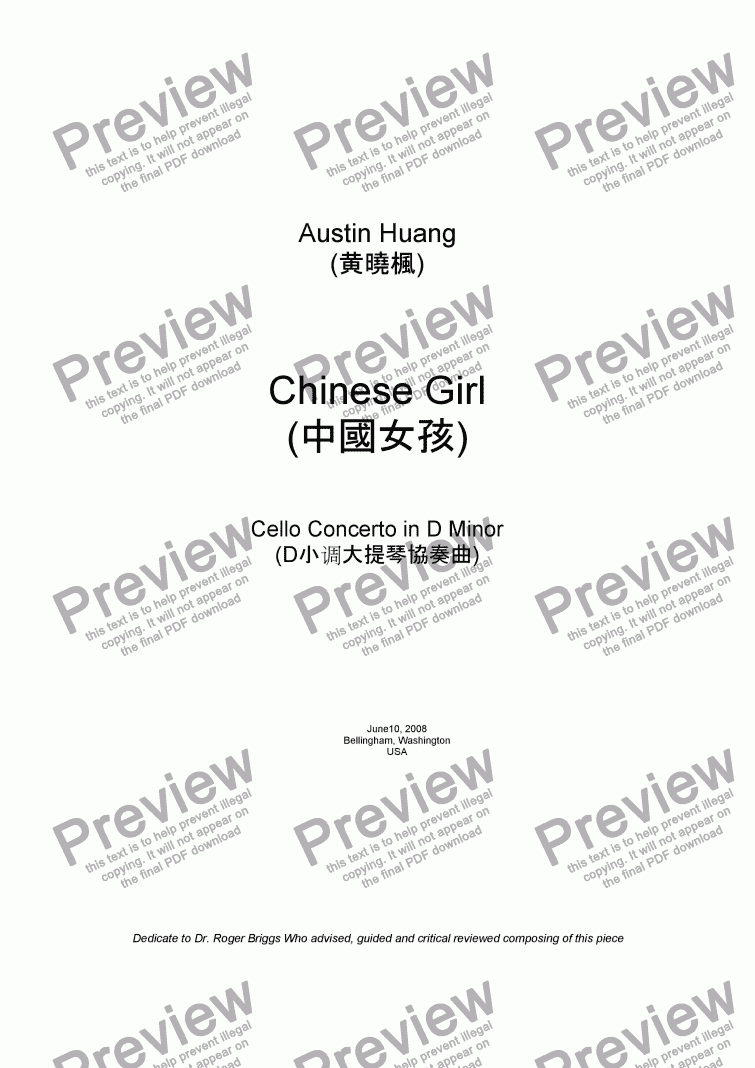 By: Austin HUANG
For: Orchestra

Composer
Austin HUANG
Year of composition
2008
Lyricist
none
Publisher
Pacific Northwest Cultural Exchange Council
Difficulty
Moderate (Grades 4-6)
Duration
32 minutes
Genre
Classical music
License details
For anything not permitted by the above licence then you should contact the publisher first to obtain permission.

In an age where composers are striving to be unique and modern through the use of atonality and odd time signatures, Austin Huang has composed a cello concerto that is refreshingly traditional in harmonic structure. What makes "Chinese Girl" unique is the way the composer brilliantly blends Chinese melody with traditional western harmony. I believe it is worthy of having a solid place in the standard cello repertoire. For the soloist, Austin’s concerto offers technical challenges that may stretch far beyond what has ever been done and can bring even the most masterful performer to another level. Just as Dvorak’s cello concerto presented new exercises in thumb position and bowing techniques, or Haydn’s concerti demanded expertise in scale execution and multiple octave leaps, "Chinese girl" showcases a cello soloist’s ability to hammer out challenging chords and play octave scales and arpeggios with glissandos and up bow staccato techniques just to name a few. The soloist might have to develop calluses on his or her fingers in new places. What might make this concerto most gratifying to both performers and listeners is the triumphant marriage of gorgeous Chinese melodies with standard traditional western harmony. To my knowledge, this is something that has not been done in a cello concerto previously, and is done here to the highest standard of perfection. The slow melodies are so haunting at times that they could possibly bring even the most hardened critic to tears. As a whole, Austin Huang’s cello concerto is the perfect blend of beautiful Chinese melody, exciting displays of technique, and brilliant conversations between orchestra and soloist. One of my favorite moments in the first movement is, after the band introduces the different sections of the work, when the cello soloist makes his or her entrance in the form of a cadenza that demands the highest level of playing. If the audience has not already been captured by the imaginative symphonic introduction, this cadenza, if done well, should certainly win them over. This is also another aspect of the work that is unique and well thought out. Austin has offered us a work that is worthy of exploration and execution. "Chinese Girl" will always be highly recommended by me. Matt Rehfeldt Cello Soloist mattrehfeldt.com

"Chinese violinists have the time-honored "Butterfly Lovers Concerto" and Chinese pianists the "Yellow River Concerto", but we do not yet have such a piece for the cello; "Chinese Girl" may just have such prospects! –- Kai Chen, former Principal Cellist of the China National Opera House

" I dare not say this work’s future position in the world, but I can say that it is definitely worth playing. The third section of the first movement particularly has momentum, energy and passion. –- Dr. Roger Briggs, professor of composition, Western Washington University, conductor of Whatcom Symphony Orchestra, Bellingham, Washington, U.S.A.

"Were Chinese Girl composed before the ballet "Red Detachment of Women" was, the ballet’s author probably instead would rather have used the cello and violin duet section that appears in the second movement of this cello concerto. –- Frank Guo, former violinist of the Former China National Orchestra