By: Samuel Scheidt arranged by Keith Terrett
For: Quintet of Marimbas [grand staff]
This music is in your basket
View basket
Loading... 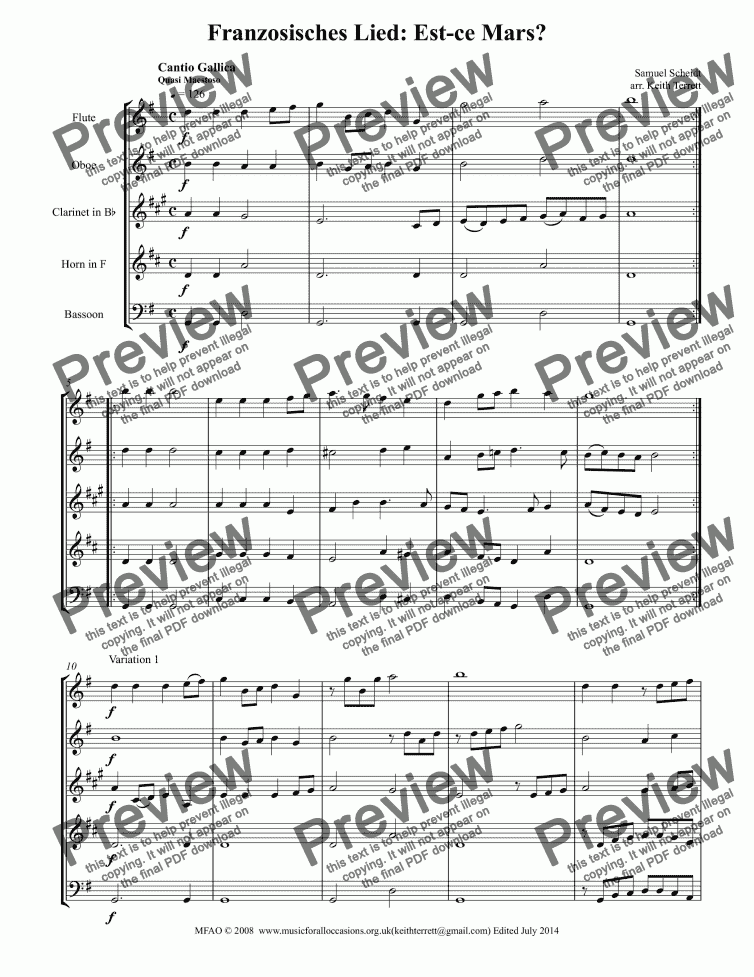 By: Samuel Scheidt arranged by Keith Terrett
For: Quintet of Marimbas [grand staff]

Composer
Samuel Scheidt arranged by Keith Terrett
Arranger
Keith Terrett
Publisher
Music for all Occasions
Difficulty
Moderate (Grades 4-6)
Duration
6 minutes
Genre
Classical music
License details
For anything not permitted by the above licence then you should contact the publisher first to obtain permission.

This arrangements makes a challenging work for your group, who should relish the rich sonorities of Scheidt’s tapestry.

A wind quintet, also sometimes known as a woodwind quintet, is a group of five wind players (most commonly flute, oboe, clarinet, horn and bassoon). The term also applies to a composition for such a group.

Unlike the string quartet with its homogeneous blend of color, the instruments in a wind quintet differ from each other considerably in technique, idiom, and timbre. The modern wind quintet sprang from the ensemble favored in the court of Joseph II in late 18th century Vienna: two oboes, two clarinets, two horns, and two bassoons (Suppan 2001). The influence of Haydn’s chamber writing suggested similar possibilities for winds, and advancements in the building of these instruments in that period made them more useful in small ensemble settings, leading composers to attempt smaller combinations.

It was Anton Reicha’s twenty-four quintets, begun in 1811, and the nine quintets of Franz Danzi that established the genre, and their pieces are still standards of the repertoire. Though the form fell out of favour in the latter half of the 19th century, there has been renewed interest in the form by leading composers in the 20th century, and today the wind quintet is a standard chamber ensemble, valued for its versatility and variety of tone color.