This work was given its premiere performance by the composer in a concert at St Margaret’s Church, Lee Terrace, London, on 19th July 2008. This performance may be heard on YouTube at http://uk.youtube.com/watch?v=MyvnaLmGCyw.

Although scored for a three-manual instrument with a Tuba stop, it may be played no less effectively on a two-manual organ with a modest specification.

After a brief introduction, which introduces a rising motif that is used in various ways throughout the work, the first main section (A) (heard twice) exploits a trio texture. The A section is mostly (but not exclusively) in 7/8-time.

The central section (B) is a little slower and explores thicker textures. This material is also heard twice, but, on its second presentation, it is presented a tone lower and with the addition of a quaver beat to alternate pairs of bars, making them in 8/8, rather than 7/8-time.

After a brief fantasy or cadenza-like passage, which ends with a modified version of the opening bars of the Prelude, the A section returns. Once again, the material is presented twice; but it is ornamented on the second of its two presentations. It leads directly into the coda, in which versions of the opening motif may be clearly discerned.

The Subject is in 13/8-time. The Exposition includes a codetta after the Answer and before the entry of the Subject in the highest voice.

The Episodes are in marked contrast to the contrapuntal material of the exposition, being more homophonic in nature and (essentially) in 7/8-time. Like the B section of the Prelude, some Episodes feature the device of increasing the length of certain bars by a quaver beat so that phrases constructed of bars of 7/8-time are subsequently developed into phrases in 8/8-time.

The Middle Entries explore different versions of the Counter-Subject and some other ways to accompany the Subject.

Towards the end of the Fugue come two sets of Stretti: first in E flat minor, in which three of the voices bring in the Subject at a bar’s distance; and, following a dramatic pause, a set in which the Subject and Answer enter in each voice in the same order and at the same pitches as in the Exposition. Each time, Subject and Answer are heard in their entirety and are not modified to accommodate the next entry.

The Fugue ends with a Coda that recalls that of Prelude, though the Subject is heard for one last time in the pedals, just before the final chord.

To purchase bound copies of any of Christopher Maxim’s music, please email webmanager@christophermaxim.co.uk

In order to submit this score to ScoreExchange.com Christopher Maxim has declared that they own the copyright to this work in its entirety or that they have been granted permission from the copyright holder to use their work. If you believe that this score should be not available here because it infringes your or someone elses copyright, please report this score using the copyright abuse form. 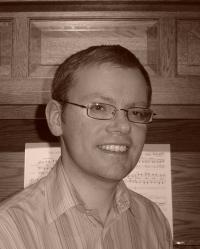