My account
Help Contact
HomeInstrumentationsSolo instrumentRODE, P. - No.4 from 24 Caprices for Solo Violin transcribed for the Viola by Gerald Manning

RODE, P. - No.4 from 24 Caprices for Solo Violin transcribed for the Viola by Gerald Manning 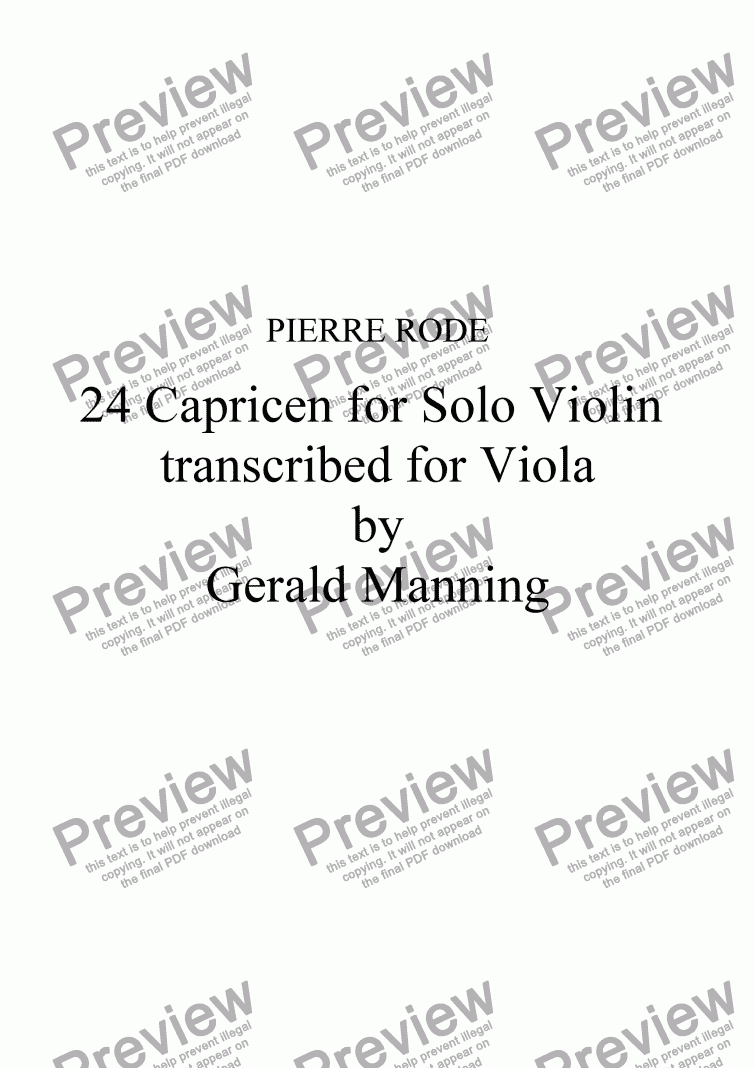 PIERRE RODE 24 CA2.95S FOR SOLO VIOLIN TRANSCRIBED FOR THE VIOLA

� Go on; don�t only practise your art, but force your way into its secrets; art deserves that, for it and knowledge can raise man to the Divine�. BEETHOVEN Letter to a young friend, quoted in Grove, Beethoven and his Nine Symphonies (Novello, London, 1898)

While the viola repertoire is quite large, the amount written by well-known pre-twentieth century composers is relatively small. Violists may therefore be forced to choose to play solo arrangements of works transcribed from other instruments. In this new series of works for solo Viola I am transcribing the 24 Caprices of Pierre Rode for serious students of the Viola, but the task I have set myself is large and the project will take some time to complete. As the title of this opus suggests Rode composed his Caprices in the form of Etudes for solo Violin in all 24 keys, and starts with the key of C major in the first Caprice and follows this with the relative A minor of the second Caprice. Of course these translate on the Viola into F major and D minor respectively, and so on until all 24 keys are utilised. Students of the Viola will find that these Caprices together with those of Kreutzer and othere are an indespensible aid and of great value in developing a well-rounded technique.

Reviews of RODE, P. - No.4 from 24 Caprices for Solo Violin transcribed for the Viola by Gerald Manning