Scherzo-Fantasy on A Children’s Song

By: John Srutowski
For: Concert band / wind band
This music is in your basket
View basket
Loading... 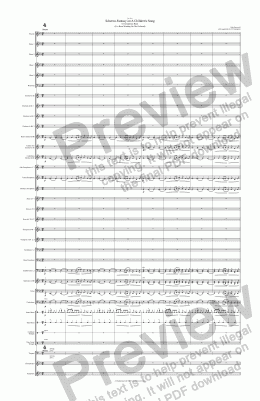 Scherzo-Fantasy on A Children’s Song

Composer
John Srutowski
Year of composition
2008
Difficulty
Difficult (Grades 7+)
Duration
11 minutes
Genre
Classical music
License details
For anything not permitted by the above licence then you should contact the publisher first to obtain permission.

This piece was conceived as a short training exercise (a loco-moto perpetuo, as it were) and virtuoso romp for symphonic band, written primarily for the amusement of my good friend, and fine musician, Eric Fassbender. The simple melody of the beloved children’s song, "I’ve Been Working On The Railroad," provides a surprisingly rich source for motivic material, either directly or through the use of various canonic devices. There are five divisions in the Scherzo-Fantasy, the first four separated by fanfare: Exposition, where most source material is presented in a more-or-less straightforward manner; Development, where the tune is subject to various treatments of contrasting colors, moods, and textures; Recapitulation, where prior material returns to accompany the tune, now morphed into a hymn-tune, then a march-hymn; Finale, a march grandioso in Eb, as in the beginning. A train horn interrupts the final cadence, and a short, descriptive coda concludes the piece. The musical depictions of train horns that occur throughout represent the variety of harmonizations one may hear through the night air near our home in Michigan, USA. Yes- there is a snippet of the University of Southern California’s "Tribute to Troy" within the coda. We are Trojan parents, and the tune fit quite well! The Scherzo-Fantasy also contains several recurring harmonic ideas, e.g. the melody harmonized with lowered 7ths and 3rds, and quartal harmony. These harmonizations are not only for the sake of variety, but also for the interesting results that fuel motivic development. The humor suggested by the scherzo character of the piece is mostly broad (with apologies to Berlioz), but at times, certain gestures that occur within the "band" genre are gently parodied, and hopefully, they will be recognized and enjoyed by those familiar with them. Many thanks to Martin Tousignant for his clever ideas and reworking of the Scherzo-Fantasy into the more accessible incarnation, the Gold Train Variations, found on Score Exchange. This version for symphonic band was created for a band of mere mortals; the original for Symphonic Wind Ensemble was written to answer the question of wind scoring as in the orchestra- big instrumental choirs, including percussion, of virtuosi players- a dream ensemble - a merely intellectual exercise. Since this version has gotten some traction on it's own, it is posted in place of the original with Marty's scoring suggestions included.

Reviews of Scherzo-Fantasy on A Children’s Song

Sorry, there's no reviews of this score yet. Please .
In order to submit this score to ScoreExchange.com John Srutowski has declared that they own the copyright to this work in its entirety or that they have been granted permission from the copyright holder to use their work. If you believe that this score should be not available here because it infringes your or someone elses copyright, please report this score using the copyright abuse form.