By: Adam Darr
For: Solo instrument (Zither)
This music is in your basket
View basket
Loading... 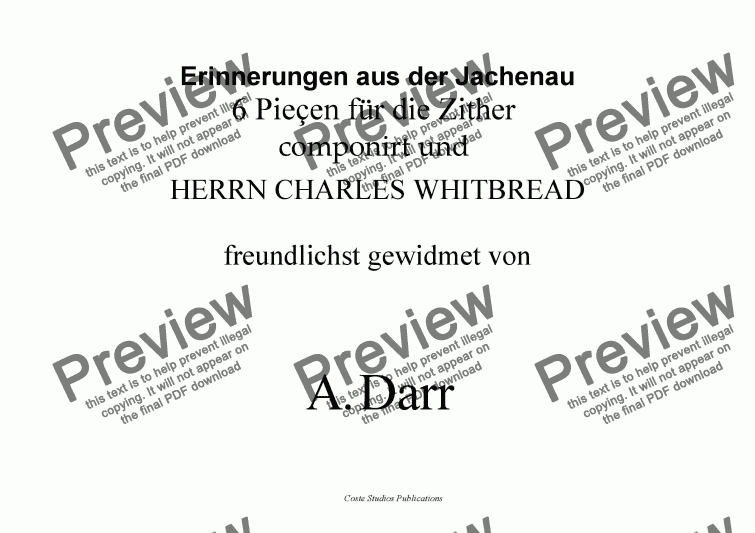 Composer
Adam Darr
Arranger
Joseph R. Costello
Lyricist
none
Difficulty
Moderate (Grades 4-6)
Duration
10 minutes
Genre
Classical music
License details
For anything not permitted by the above licence then you should contact the publisher first to obtain permission.

The Erinnerungen aus der Jachenau, 6 pie�en f�r die Zither (Remembrances of Jachenau), by Adam Darr, was published by Anton B�hm Verlag of Augsburg between September and October of 1861. It was Darr�s sixth work that he published with B�hm. This work is similar to two previous pieces, that is, it is a compilation of ethnic pieces gathered from the Bavarian Alps. Jachenau is a beautiful Bavarian alpine town that well to do Munichers would visit on vacation. Of interest is that Jachenau is dedicated to Mr. Charles Whitbread, to whom Darr was governor and music teacher. Also important are that three of the songs are given dates. He was their governor during this period and was probably traveling with the family on their vacation. The songs are as follows: 1. Das Echo im Gebirge (21 October 1850) (The Echo in the Mountains), 2. Gemsj�gerlied (Mountaingoat Hunter Song), 3. Auf der Bauernhochzeit (19 Jan. 1851) (At the Farmer Wedding), 4. Der Abschied vom alten M�tterl (22 Febr. 1851) (The Farwell of the Old Mother), 5. & 6. Schnada�pfln (A Bavarian Country Dance).

In an effort to bring some clarity and brevity to the notation, I have used some guitar designations. The fretboard strings are designated as Arabic numerals inside of a circle and orders from the highest string (a) number 1 to the lowest string © number 5. Harmonics are designated with diamond note heads at pitch, with a string number and fret number. Although this is a departure from past practices, I believe it adds clarity and a certain amount of uniformity with other classical instrument notation.

Sorry, there's no reviews of this score yet. Please .
In order to submit this score to ScoreExchange.com Joseph R. Costello has declared that they own the copyright to this work in its entirety or that they have been granted permission from the copyright holder to use their work. If you believe that this score should be not available here because it infringes your or someone elses copyright, please report this score using the copyright abuse form.