By: Richard Mohrmann
For: Concert band / wind band
This music is in your basket
View basket
Loading... 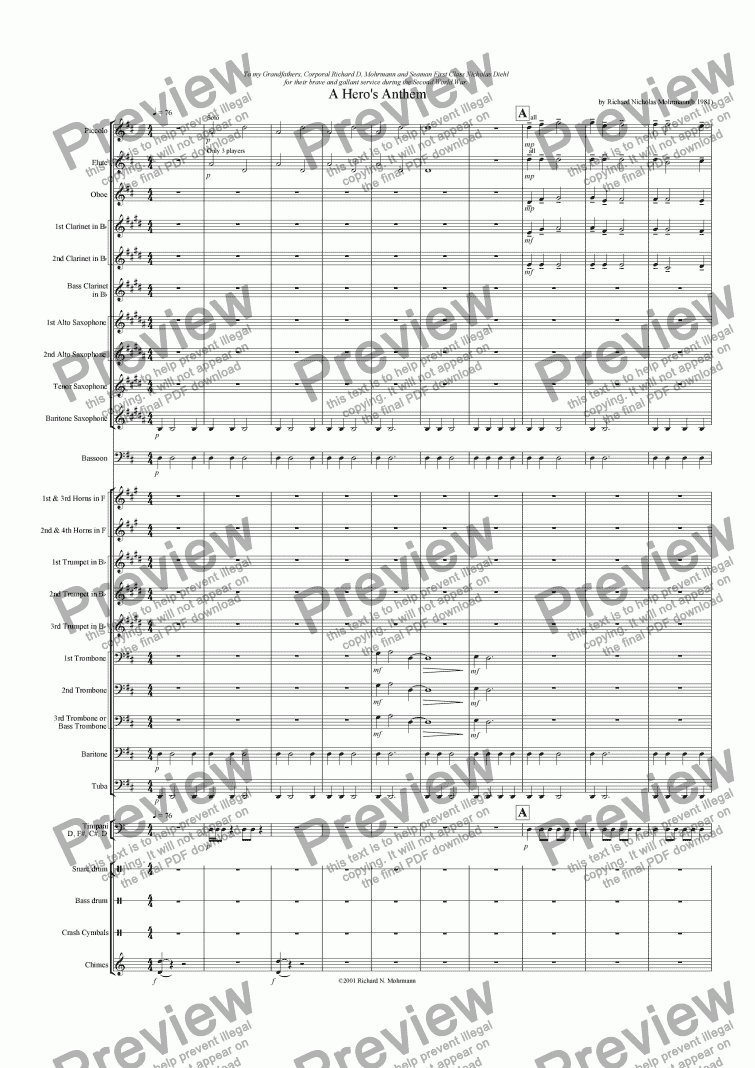 Composer
Richard Mohrmann
Year of composition
2001
Lyricist
none
Publisher
Mohrmann's Orchard
Difficulty
Difficult (Grades 7+)
Duration
7 minutes
Genre
Modern classical music
License details
For anything not permitted by the above licence then you should contact the publisher first to obtain permission.

Sixty years ago, when Japan attacked Pearl Harbor, many brave soldiers went off to fight for the Stars and Stripes. Two of those men were my grandfathers, Corporal Richard D. Mohrmann and Seaman First Class Nicholas Diehl.

Corporal Richard D. Mohrmann served in the 33rd Infantry from late 1944 through 1946 and was at Leyte and Luzon in the Philippines. He and his division were planned to be in the first wave of X-Day, the Invasion of Japan, which was set to be November 1, 1945. The odds of survival were slim. The United States however, chose to drop two Atomic Bombs ending the war. After that, my grandfather took part in the occupation of Japan and their demilitarization. Seaman First Class Nicholas Diehl served on board the USS Stafford, a destroyer-escort. He saw several battles on the Pacific. He was also responsible for shooting down at least three Japanese Kamikazes and was also responsible for detaining a Japanese prisoner who got loose on board the ship.

I wrote this so that the world will know the brave and courageous acts which my grandfathers did while they served their country. Even knowing many times that survival was unlikely; they didn't run away and hide. Their courage will always be a role model for myself.

I dedicated this piece to them and to honor what they did.

Corporal Richard D. Mohrmann is retired enjoying life with his wife in southern New Hampshire. Seaman First Class Nicholas Diehl lived in northeastern Pennsylvania until his passing on October of 2006 at the age of 80 years old.

On May 8, 2007, the Mena High School Band in Mena, Arkansas premiered A Hero's Anthem at their spring concert. It was the first live performance of A Hero's Anthem. That is the recording that has been loaded onto this page. I was pleased to share this with my surviving Grandfather on Memorial Day Weekend 2007. My sincere thanks and appreciation to the Mena High School Band!

A Hero's Anthem in Eb Major

Reviews of A Hero's Anthem

Sorry, there's no reviews of this score yet. Please .
In order to submit this score to ScoreExchange.com Richard Mohrmann has declared that they own the copyright to this work in its entirety or that they have been granted permission from the copyright holder to use their work. If you believe that this score should be not available here because it infringes your or someone elses copyright, please report this score using the copyright abuse form.