By: Nikolai Rimsky-Korsakov
For: Solo instrument (Organ [manuals])
This music is in your basket
View basket
Loading... 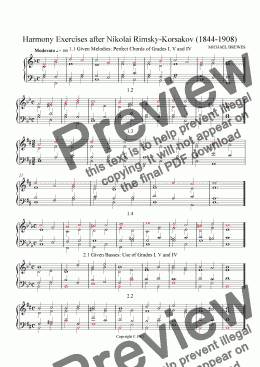 Composer
Nikolai Rimsky-Korsakov
Year of composition
1962
Arranger
Michael Drewes
Lyricist
none
Difficulty
Not applicable (e.g. worksheet)
Duration
17 minutes
Genre
Classical music
License details
For anything not permitted by the above licence then you should contact the publisher first to obtain permission.

I worked out these exercises from a treatise on harmony by the Russian composer Nikolai Rimsky-Korsakov probably around 1962, when I thought that acquiring knowledge of the matter was urgent if I wanted to achieve satisfactory results in my own musical creations. At the end of the book, problems were posed in the form of simple themes of eight bars, with the half note or minim as a time unit, with either the bass or the melody as a given, which is highlighted in red, for harmonizing in four voices for each section, namely:

For exercise 5.6 I proposed an alternative solution, which is crossed out in the original handwritten notebook.

I do not have the book any more, but I remember that it was published by Ricordi Americana in Spanish. Therefore, these are the only remains at my disposal. At the time I solved these exercises, I had no piano available, and it is only by having passed them into �Sibelius� that I am able to hear them now. It is advisable for the student to listen to these exercises in order to acquire the right consciousness on how each one of the chord combinations sound. They are by no means perfect solutions even though I proofread them with the plug-in �Check for Parallel Fifths and Octaves� of the �Sibelius� Program and corrected them accordingly. There is an almost infinite amount of manners in which the given basses and melodies can be harmonized.

I could not get around continuing with the exercises for dissonant combinations (seventh, ninth and eleventh chords), free use of all the grades of the scale and the harmonization of chorales (protestant church anthems) which were also within the scope of this treatise. Later, I studied the "Harmonielehre" by Arnold Sch�nberg and a book on traditional harmony by Paul Hindemith, in order to complete my knowledge.

As instrumentation I chose the rather unglamourous harmonium, which, however, like the organ is capable of sustaining notes for the whole time of their duration. This allows for perfect perception of the changes from one chord to another. By comparison, the sound of the piano and even more so that of the harpsichord dies down relatively quickly.

My worksheet "Thematic Evolution" gives instructions on how to convert such rather boring exercises into more interesting themes.