By: James James
For: String orchestra
This music is in your basket
View basket
Loading... 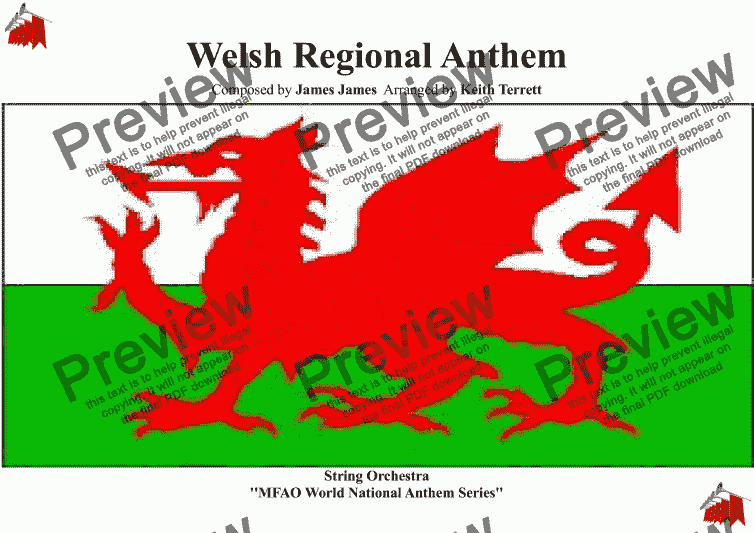 By: James James
For: String orchestra

Composer
James James
Year of composition
1856
Arranger
Keith Terrett
Year of arrangement
2012
Lyricist
Evan James
Publisher
Music for all Occasions
Difficulty
Moderate (Grades 4-6)
Duration
2 minutes
Genre
Classical music
License details
For anything not permitted by the above licence then you should contact the publisher first to obtain permission.

The local regional anthem of Wales arranged for Symphony Orchestra. Other versions for Brass Quintet & Orchestra are in store.

Wales is a constituent nation of the United Kingdom, like the other nations within the United Kingdom, Wales has its own national anthem as well. In 1856, a father (lyricist) and son (composer) wrote what was first known as “Glan Rhondda” (The Banks of the Rhondda River). The tune spread throughout Wales with various performances, even gaining note as being the first piece of recorded music in the Welsh language, in 1899. In 1905, “Hen Wlad fy Nhadau” became the first national anthem to be sung before a sporting match, in a rugby match against New Zealand that Wales went on to win.

The song has come to be used as a Celtic anthem as well, the melody (with slight variations) is used as the national anthem in both Brittany and Cornwall, both Celtic areas.

Like other anthems of the constituent countries of the United Kingdom, including that of the United Kingdom itself, “Hen Wlad fy Nhadau” has not been officially declared as the Welsh anthem, but it remains so as a matter of tradition. Also, despite English being a prominent language in Wales, no official English translation or versification has been made; the anthem is almost always sung in Welsh, and usually just the first verse and chorus﻿.