By: Alexander Vasilyevich Alexandrov
For: Brass quintet
This music is in your basket
View basket
Loading... 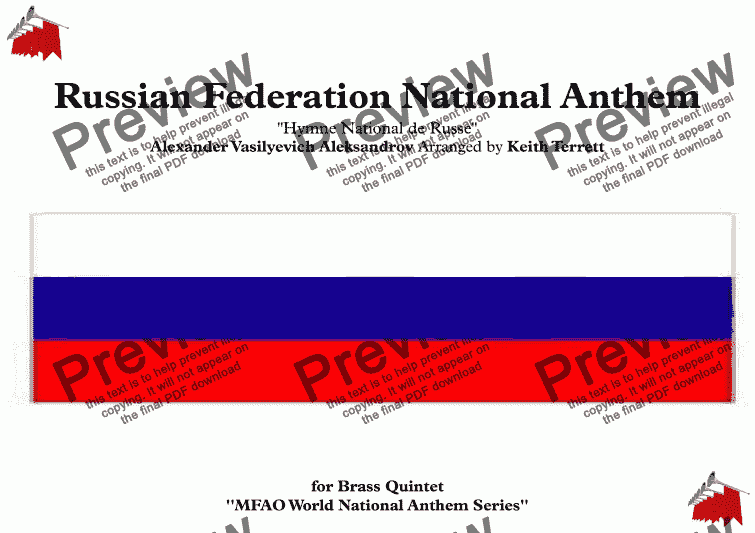 Composer
Alexander Vasilyevich Alexandrov
Year of composition
1939
Arranger
Keith Terrett
Year of arrangement
2006
Publisher
Music for all Occasions
Difficulty
Moderate (Grades 4-6)
Duration
1 minute
Genre
Classical music
License details
For anything not permitted by the above licence then you should contact the publisher first to obtain permission.

The Russian Federation National Anthem arranged for Classical Brass Quintet. There are versions for String Orchestra & Symphony Orchestra in store.

The music of the national anthem, created by Alexander Vasilyevich Alexandrov, had been used in several hymns and compositions before its use in the Russian anthem. The first time the music was used was in the Hymn of the Bolshevik Party, created in 1938. When the Comintern was dissolved in 1943 it was felt that the Internationale, which was historically intimately associated with the Comintern, should be replaced as the National Anthem of the Soviet Union. Alexandrov’s music was chosen for that purpose in 1944 by the Soviet leader Joseph Stalin. Before Alexandrov created the Bolshevik hymn, he first used pieces of the music in the song Zhit’ stalo luchshe (It has become better to live).

During the 2000 anthem debate, it was discussed in the newspaper Lenta.ru that the music Alexandrov created for the Soviet hymn was similar to Vasily Kalinnikov’s 1892 overture Bylina. The supporters of the Soviet anthem used this fact in the various debates that took place in the Duma about the anthem change. There is no evidence that Alexandrov deliberately borrowed or used parts of Bylina in his composition.