By: Alexander Alexandrov
For: String orchestra
This music is in your basket
View basket
Loading... 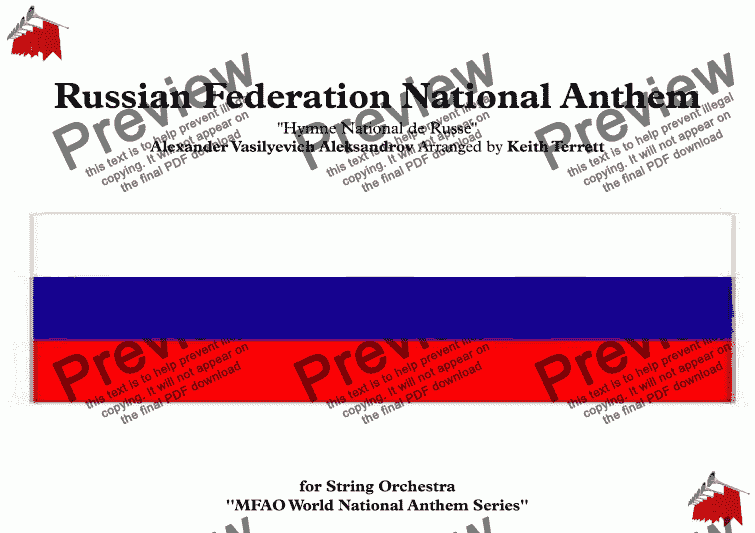 By: Alexander Alexandrov
For: String orchestra

Composer
Alexander Alexandrov
Year of composition
1939
Arranger
Keith Terrett
Year of arrangement
2006
Publisher
Music for all Occasions
Difficulty
Moderate (Grades 4-6)
Duration
1 minute
Genre
Classical music
License details
For anything not permitted by the above licence then you should contact the publisher first to obtain permission.

It is an adaptation of the anthem of the Soviet Union of 1944, with music originally composed by Alexander Alexandrov. The lyrics were revised for the anthem of the Russian Federation by Sergey Mikhalkov, who had supplied lyrics for versions of the Soviet anthem in 1943 and 1977. The revision removes any mention of Vladimir Lenin's ideas and the "unbreakable union" of the Soviet state, instead focusing on a country that is vast in area and rich in resources that will be entrusted to future generations.

The hymn was adopted in late 2000 by President Vladimir Putin and replaced The Patriotic Song, which had been the official anthem from 1990.

Before Molitva russkikh (The Prayer of the Russians) was chosen to be the national anthem of Imperial Russia, various church hymns and military marches were used to honor the country and the Tsar. Molitva russkikh was adopted around 1815, and used lyrics by Vasily Zhukovsky set to the music of the British anthem, "God Save the King".

In 1833, Zhukovsky was asked again to write lyrics to a musical composition by Alexei Fyodorovich Lvov called The Russian People's Prayer. It was well received by Nicholas I who chose the song, known more commonly as "God Save the Tsar!", to be the next anthem. The song sounded very much like a religious hymn, and its musical style was similar to that of the other anthems used by European monarchs. "God Save the Tsar" was used until the February Revolution, when the Russian monarchy was overthrown. The tune is in several English-language hymnals with words beginning "God the Omnipotent! King who ordainest/Thunder thy clarion, lightning thy throne!" (or variants).

Upon the removal of the Tsar and his family in March 1917, the Worker's Marseillaise, a modification of the French anthem La Marseillaise by Pyotr Lavrov, was used as an unofficial anthem by the provisional government. Written in 1875, its use as anthem was short-lived. After the provisional government had been overthrown by the Bolsheviks in the 1917 October Revolution, the anthem of international revolutionary socialism, L'Internationale (normally called in English "The Internationale"), was adopted as the new anthem. Eugene Pottier, another French national, wrote the lyrics to this song, and the music was furnished by Pierre Degeyter, a Belgian composer. Translated into Russian by Arkadiy Yakovlevich Kots in 1902, The Internationale was used as the anthem of Bolshevik Russia from 1918, and adopted by the newly-created Union of Soviet Socialist Republics in 1922, to be used until 1944.

Music: The music of the national anthem, created by Alexander Vasilyevich Alexandrov, had been used in several hymns and compositions before its use in the Russian anthem. The first time the music was used was in the Hymn of the Bolshevik Party, created in 1938. When the Comintern was dissolved in 1943 it was felt that the Internationale, which was historically intimately associated with the Comintern, should be replaced as the National Anthem of the Soviet Union. Alexandrov's music was chosen for that purpose in 1944 by the Soviet leader Joseph Stalin. Before Alexandrov created the Bolshevik hymn, he first used pieces of the music in the song Zhit' stalo luchshe (It has become better to live).

During the 2000 anthem debate, it was discussed in the newspaper Lenta.ru that the music Alexandrov created for the Soviet hymn was similar to Vasily Kalinnikov's 1892 overture Bylina. The supporters of the Soviet anthem used this fact in the various debates that took place in the Duma about the anthem change.There is no evidence that Alexandrov deliberately borrowed or used parts of Bylina in his composition.

In 1943, Mikhalkov and G. El-Registan completed the task of writing the lyrics, which were approved a year later by Joseph Stalin, the Soviet leader.