By: John Bull?
For: String orchestra
This music is in your basket
View basket
Loading... 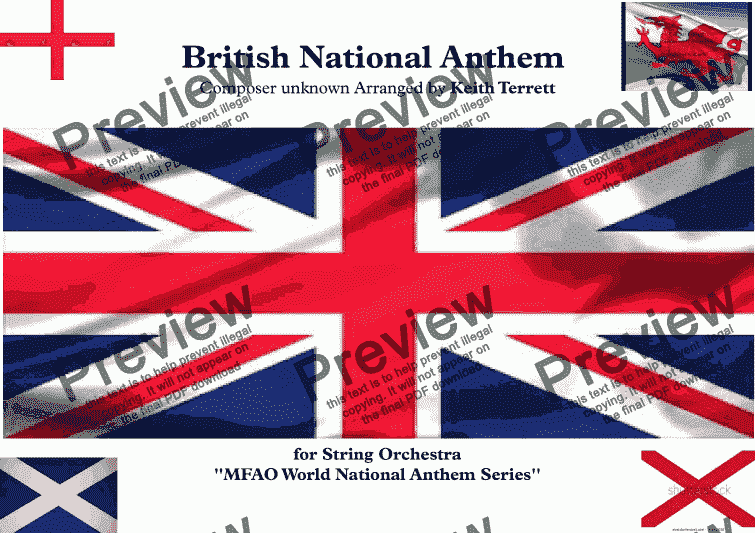 By: John Bull?
For: String orchestra

Composer
John Bull?
Arranger
Keith Terrett
Year of arrangement
2013
Publisher
Music for all Occasions
Difficulty
Easy (Grades 1-3)
Duration
1 minute
Genre
Classical music
License details
For anything not permitted by the above licence then you should contact the publisher first to obtain permission.

There are alternative versions for Brass Quintet & full Symphony Orchestra in my stores.

The words and title are adapted to the gender of the current monarch, i.e. replacing Queen with King and she with he when a king reigns. The author of the tune is unknown and it may originate in plainchant, but a 1619 attribution to John Bull is sometimes made. It is the national anthem of the United Kingdom and one of two national anthems used by New Zealand since 1977, as well as for several of the UK's territories that have their own additional local anthem. It is also the royal anthem of all the aforementioned countries, as well as Australia (since 1984), Canada (since 1980),[3] Barbados and Tuvalu. In countries not previously part of the British Empire, the tune of "God Save the Queen" has provided the basis for various patriotic songs, though still generally connected with royal ceremony. In the United States, the melody is used for the patriotic song "My Country, 'Tis of Thee". Beyond its first verse, which is consistent, it has many historic and extant versions: Since its first publication, different verses have been added and taken away and, even today, different publications include various selections of verses in various orders. In general, only one verse is sung. Sometimes two verses are sung, and on rare occasions, three. The sovereign and his or her consort are saluted with the entire anthem, while other members of the Royal Family who are entitled to royal salute (such as the Prince of Wales) receive just the first six bars. The first six bars also form all or part of the Vice Regal Salute in some Commonwealth realms outside the UK (e.g., in Canada, governors general and lieutenant governors at official events are saluted with the first six bars of "God Save the Queen" followed by the first four and last four bars of "O Canada"), as well as the salute given to governors of British overseas territories. For more of my original music, great arrangements and all the national anthems of the world, check out my on-line stores: http://www.scoreexchange.com/profiles/keith_terret http://musicforalloccasions.org.uk http://www.sheetmusicplus.com/search?Ntt=keith+terrett Need an anthem fast? They are ALL in my store! All my anthem arrangements are also available for Orchestra, Recorders, Saxophones, Wind, Brass and Flexible band. If you need an anthem urgently for an instrumentation not in my store, let me know via e-mail, and I will arrange it for you FOC if possible! keithterrett@gmail.com

Need national anthems for an upcoming sporting or other event? I can provide high quality MP3's of my arrangements especially for you and your special occasion: keithterrett@gmail.com﻿